Legends tell that, the early elven druids also discovered the grovewalkers. Soon after that discovery, as tales spread, the dwarves and humans of the Realm sought grovewalkers out to understand and control their teleportation powers. Aggressive and unrelenting, a number of grovewalkers were slain by treasure-seekers. In order to protect the stone fey, the druids built large stone circles - with dozens of stones resembling the grovewalkers - in which the solitary creatures could hide. Over time, these standing stones became sacred places for the druids - both in protecting the grovewalkers and providing transportation across the vastness of the Evenwild and forests of the Realm. It is said that today only the highest order druids communicate directly with the grovewalkers.

The Laboratory of Stone 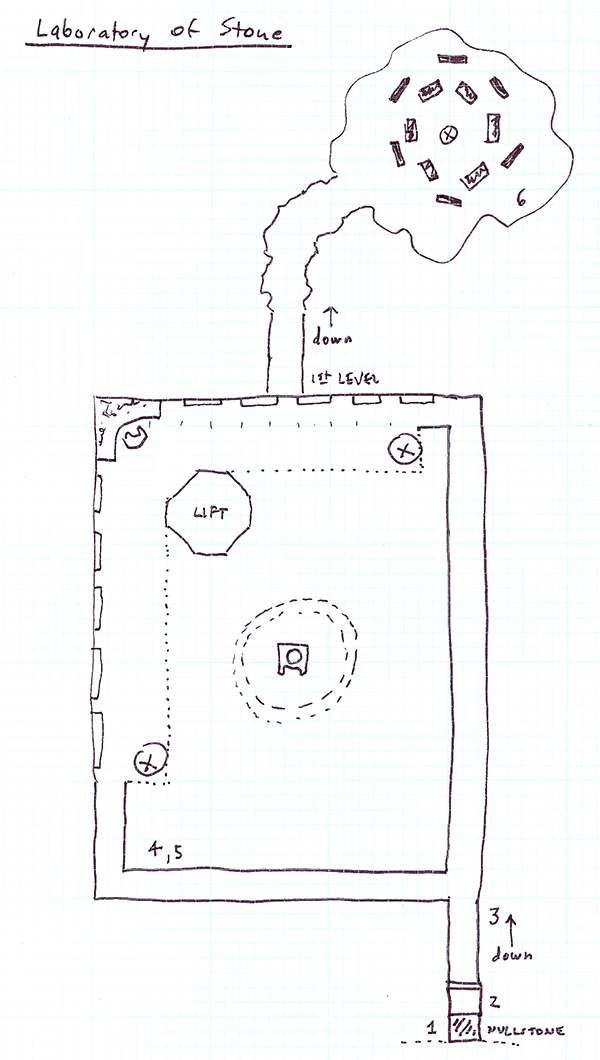 Legend holds that the Overlord Roderick XIII, an otherwise minor First Age ruler, was fascinated by stories of the Grovewalkers. Crippled since birth, Roderick used his considerable magical talents to research the creatures - with a dream of using their powers to move effortlessly throughout the palace and his kingdom.

Underneath the Overlord's Palace in the Celestial City, Roderick created a labyrinth he called the Laboratory of Stone. This was Roderick's refuge, a strange space that no others would enter. In addition to mundane stones from across the Realm, Roderick's minions would gather stones from haunted places, broken tombstones from fallen heroes, and magical stones with strange and oftentimes destructive powers. The highest bounty was set on pieces gathered from Grovewalkers themselves - not enough to kill the creatures, only harness their powers.

In time, it was clear that Roderick had gone mad. His rule became twisted and cruel. His court looked for ways to end his rule. One night, as Roderick worked alone in his impenetrable labyrinth, a solid block of nullstone suddenly appeared in the entrance to his subterranean vault. Some rumors hold that the Grovewalkers themselves teleported it there while others nod to courtly intrigue. Whatever the source, the Laboratory of Stone was quickly plastered over - its exact location eventually forgotten.

This room is 40'x120' with two large stairways leading down into a sunken center. The floors and walls of this room are made of a black polished stone somewhat plain for the palace. The ceiling is likewise black stone and hidden in the shadows. Inserted into the walls are tombstones, death masks, and elaborate mausoleum entrances. These line the walls like sentinels of death. The air is still here and all sound seems to be muted. The design of the tombs appears to be from the First Age.

NOTE: The entrance here is in the Mausoleum Room NE corner.

In the far northeastern corner is a blank space on the wall. A slightly raised rectangular area roughly 6 feet tall by 6 feet wide sticks a few inches from the wall. This area feels particularly dead - light is muted, sounds are muffled, and spells are weakened.

The wall is soft lead-like metal painted black. The material can be cut by mundane means, but magic does not seem to work well here.

This room has 4 oblivion guards. The null stone will negate magic working here - depending on how close the party is to the source. Someone will need to cut through the null stone while others deal with the guards.

The walls, ceiling and floor here are made of thousands of pieces of stone, rock and other minerals. Illumination comes from periodic outcropping of a clear purple crystal which glows - giving the hallway a particularly unhealthy glow. Some of the stones here are clearly ancient tombstones and cornerstones of buildings fitted into an intricate pattern of colors and textures.

The oblivions guards will not move into this space.

On the wall opposite you is a strange 5x5 grid with 2" square indents. In a small rack off to one side are 25 six-sided dice - each 2x2" on a side. When you move into the room, the dice flicker red for a moment and then glow dully. 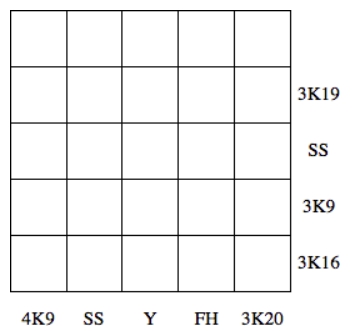 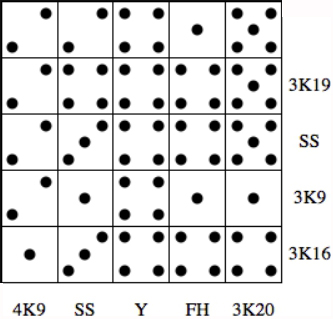 As the puzzle is completed, the stone wall slides to one side revealing a downward-sloping hallway. There are no steps here, and the floor is polished to a bright sheen.

Encounter 3: The Ramp and Hallway

Leading down from the nullstone block, the passageway is a hallway 10 feet wide that slopes down at an steep angle. The walls are carved with faint runes that can be felt but are difficult to see.

NOTE: Magic spells cast or otherwise invoked here will cause a flickering of red light to trace the stones near where the magic was cast. Shortly thereafter, a Stone Cube will rise from the floor, ceiling or wall - attempting to crush the party. They are sensitive to movement - however slight - and will hurdle at any such disturbance.

At the bottom of the ramp the hallway splits both north and west. The strange composition and lights can be seen throughout.

The hallways open into the upper story of a large room. A ledge around the edge of the room is lined with thousands of small niches, each containing a stone or mineral sample. Each is carefully labeled and dated - with both a location and name. Most appear to be from the late 9th and early 10th centuries of the First Age. Some appear to be carved, although most are natural.

Two stone golems stand at the corners of the upper laboratory. They appear to be made of the dozens of different types of stone.

NOTE: This gives them invulnerability to most spells.

The golems will attack if the party moves onto the ledge.

A mechanical lift in the northwest corner of the ledge allows for movement between the upper and lower laboratories. It has pullies and counterweights and looks like it could easily support the weight of a number of humans - or golems.

A desk near the elevator has papers scattered about it along with inks, quills and other writing implements.

NOTE: This is where the party will find the legend of the Grovewalkers.

The lower laboratory - like the ledge above - is lined with thousands of small niches containing minerals and rocks of all types. Each is labeled. The room however, is dominated by a large circular stone ring in the floor. Hovering above the stone ring is a skeletal figure floating in a stone chair. He has a staff - also made of multicolored stone - in his hands. On his head is a gold crown. His eyes glow a fiery red.

This is Roderick XIII. He will cast spells at the walls to cause them to animate against the party as he slowly backs up toward a passageway in the north wall. NOTE: He couldn't move before since the nullstone was dropped. He died and just recently reanimated.

"Thank you for returning me to life. I thought that damned nullstone would be there for another millennia."

Summon Xorn from the circle.

NOTE: Alfric's Amulet Shard #1 is in one of the niches.

The smooth carved walls of the crypt give way to a rough-hewn stone. Abruptly, the hallway ends, dumping into a large circular natural chamber. In the center of the room are a number of large number of grey standing stones.

IF RODERICK XIII made it here: In the center of the stones, a dark mist is beginning to form, swirling. Roderick will try and exit through the mists - which are now working due to the fact that the nullstone is gone to teleport themselves and all within away. The figure will be slumped in the corner.

IF RODERICK XIII was killed: Hanging in the center of the standing stones is the form of an elven woman dressed in tattered green robes. Other than robes, she does not appear to have any possessions. Hair is white, although it is streaked with red from a number of open wounds on her body. Her mouth is opened in screaming agony.

When the spell is broken, the body will drop to the ground, the flesh drying and flaking off, the bones begin to crumble - leaving only the partial remains of a skull.

This is a Nessa, an earlier worshipper of Oakentree - although before the druids were organized. Nessa uses the Grovewalkers to move between standing stones - as a protector of their secret and a guardian of nature. She was being tortured by Roderick XIII to find out the secrets of the Grovewalkers.

This is a gateway to the Standing Stones. One stone has dozens of little cubes carved out of it. This is Menhir, a Grovewalker, which will give the party teleportation rights (maybe Wittenagemot). It will also ask for a circle to be made in which it can hide. However, it is currently dimensionally bound by a trap set by Roderick XIII.

NOTE: There are no baby Grovewalkers - they are a dying race from beyond the Void who came to the Realm to find peace and contentment in the natural beauty - before the First Age of Man.

He can teleport others but is dimensionally locked - which requires a puzzle to break. Draw a loop that moves horizontally and vertically and passes through each square exactly once. Nowhere on the loop should 4 consecutive suits be all different. 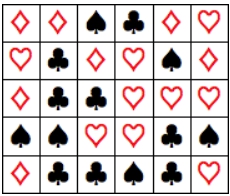 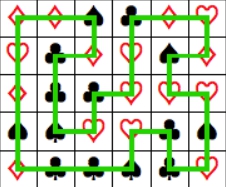 If freed, Menhir is with the party. He will greet his "brother" Menhir as well. It seems they all called Menhir. They will be reluctant to help beyond a one-time teleport of troops.

This is the home to two sleeping ancient green dragons - Daganth the Loud (male) and Boadhol the Victorious (female). They recognize the party from Tolbath's bounty (for stealing the chess piece from him).

They will move to attack the party - their acid will kill the Grovewalkers. They are scouts for the dragons of the Wyrmwyld - waiting for the call to war by the Overlord. They have a burrow nearby on the edge of a lake - mostly piles of cow bones, but they raided a caravan on the other side of the mountains - just some dwarves - taste nasty - but they did manage to bring back a pile of 50,000 gold, Alchemist's Chalice, Spectral Noose, Poison Fork, and one segment of the Staff of Io.

You enter a large cave roughly 60 feet in diameter with a single entrance to the west.