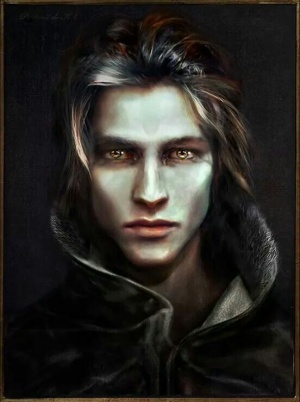 It is October 15, 903 TA. The soothsayers are telling of a harsh winter, and the cold leaden skies of late October bear witness to that possibility. You haven't seen the sun in weeks, and the city seems lifeless - colors muted and even sounds of the day are muffled.

The citizens of Teufeldorf are in a similar foul disposition. The kingdom is again at war, and the Second War of the Reaches is going poorly. Teufeldorf was sacked in June 899 TA by the Tang and the Orc Nation. Even though the Crown was able to retake the city by the end of the Summer, the damage was extensive. So too was the damage to the Crown's reputation. Even now, the "Three Kings" are out on a mission. Hiding, some say. More likely lining their coffers with other people's gold - wartime taxes. Bah. And now rumors swirl that the Eastern Reaches have been overrun by werewolves and vampires. The doomsayers are out in force, and their message is resonating. And then there is this damn, soaking drizzle. Days upon days of endless grey and cold.

You are kids, and you are bored.

Tonight is the Third Harvest holiday and bonfires are being lit across the city. You have gathered at the Wickham Estate to "play games" with your friends - just waiting for Baron Wickham to go to bed - which is usually about 10pm.

Your real goal for tonight is the Redcap Freehouse in New Town. According to the local gossip at the Wickham House School, the pub is having a contest of wits called the Redcap Two Step. The prize is a free evening smoking moondragon root, eating legs of roasted mutton, and drinking all the wine you can stomach. And, they say winners get free run of the upstairs lodgings of the freehouse. It might not be true, but you have to check it out - just in case.

You hear the clock at the end of the hall strike ten chimes. Surely, Baron Wickham is asleep. Time for action!

Past Adventures of the Irregulars

For many years The Irregulars have adventured in the Realm. From the early days of the Rice Irregulars (1981) to the most recent adventures aboard the Wanton Wench by the Lyons Irregulars, the tales of these characters - great and small - weave the fabric of the Realm. Unlike the long-running high school campaign which predictably meets once a year at Matcon, irregular adventures include everything from one-night stands to five-year, fifty plus session mega-dungeons.

These are the stories and tales created by the most diverse and eclectic cast of characters ever assembled. Below are some of their best.