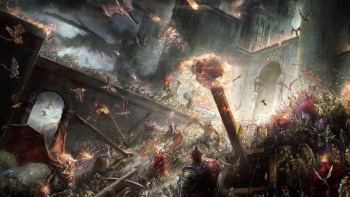 After successful campaigns in 904 TA and 905 TA, the Second War of the Reaches seems to be coming to a close.

Sandal and the Orc Nation are back under control.

The death of Emperor Shiba ended the Tang Empire's involvement in the Reaches. Assurances from the new Emperor, Kaji of the South Wind, have returned the Tang merchants to a normal trade relationship. Rumors purport that Valdemar departed the Tang Empire, slipping away on a ship in the night following Shiba's death.

Dugald Axeworthy prepared for limited engagement from the Wolfshaunt in the Eastern Reaches and a possible incursion from the Tomb Kingdom.

A warning from King U-Gene who was adventuring in the Wolfshaunt brought a shocking realization - the Old Kingdom of Rembia had been bribed to attack the Reaches! An unknown foe and an unknown agenda.

Full forces were mustered throughout the Reaches. Heavy taxes were levied and the troops mobilized.

As expected, the Wolfshaunt army streamed through the Hornwood - right into the waiting Eastern Reaches forces. In March 906 TA, the ambush was sprung - a complete route of the wolves. The Eastern Reaches were safe.

In April 906 TA, the Old Kingdom navies arrived. Almost immediately, Everdoom and Teufeldorf were placed under siege. In addition, the Tomb Kingdom forces moved to siege Crossgate Castle. By May 906 TA, Grunfeld Keep had fallen. The other sieges moved into the summer.

In July, the Old Kingdom troops defeated the elves in an open field combat. Shortly thereafter, the news reached Dugald Axeworthy. The City-State had fallen. For the third time in twenty years, the gates were sundered and the city lost.

A single bright spot for the Reaches in the summer 906 TA was a dwarven open field victory over the skeletons from the Tomb Kingdom.

An Old Kingdom victory over the gnomes in the open field was followed up by successful sieges of Asgarde, Wilderland Castle, Southgate Tower, Everdoom, and Admunfort. The Western Reaches was in shambles. Calls for the overthrow of King Fleetwood started circulating in the pubs and inns of the land.

As the snows begin to fall, the City-State is still under Old Kingdom control. The economy is ruined. At least the invaders are civilized - compared to the orcs, the sons of Hastur, and the demons that came before.

It will be a long winter for the Reaches.