The Pass of Lar 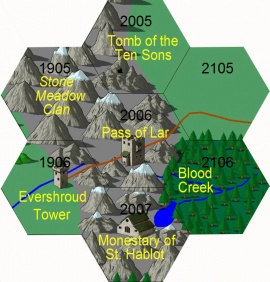 Adventures in the Pass of Lar 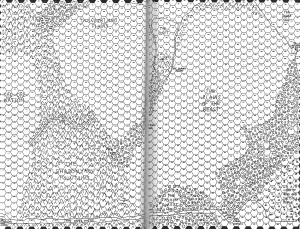 The Pass of Lar has always been the most important feature of this area of the Realm. It provides the only path through the Shadowyarn Mountains large enough for supplies and large numbers of people. For hundreds of years, it has been held by a mysterious group of men known as the Keepers. At the center of the pass lies a large castle. It is said to be unattackable except by the air. Also, a mysterious guardian statue is said to protect the Pass from all unwanted travelers.

The Party spent many hours in council with the Lord March of Rivershaw Castle and his advisers. One by one, our heroes arrived until the Party was once again reunited. The Legend of the Pass of Lar was analyzed, and the party set out confidently in order to solve the mystery of the Guardian of the Pass. Eight scouts were sent out in small groups as follows:

The Legend of Lar

This legend is told to you by the men of Rivershaw Castle. It is common folklore of the area.

The Legend of Lar

The golden light of Lar has died,
The widows weep, the children cry.
The pawns of war have all been killed,
Their wounds were deep, their graves are filled.

First wooded East in goodness light:
Their struggle fails, they lose their fight.
Then black-plained West in evil din
Prepares their plan, the war to win.

The Pass would fall within the day,
No god could help to block the way.
The good King William, the evil Rex
Met on the field to fight the test.

If William wins, the West will fade,
Their leaders killed, their plans waylaid.
But strong King Rex his pride came out,
He couldn't think to lose the bout.

The courts assembled on the field
With ten good men and swords to wield.
Queen Catherine and the evil Mel
Rounded out the dueling twelve.

The side of good was dressed in white.
King William stood amidst his knights.
And to his left Queen Catherine prayed,
Both flanked by men whom God had made.

A holy Monk and Father Rine
Stood waiting for a holy sign.
The final two were men of steel,
Brave Sir John and Sir Neal.

Across the field the evil King
His mind was set on cruel things.
The witch named Mel was on his right,
And all were dressed just as the night.

Twin clerics Brig and Brek did glare
From either side of the pair.
And finally from the Northern Land
Two men of snow on ends did stand.

The fight was ready to begin,
All mankind was the prize to win.
Sir Neal was to his queen's left side,
And to her front he took his stride.

The evil Breg crossed the field
From right to left his staff to wield.
Past Mel and rex and finally on
To meet the queen and steal her crown.

But brave Sir john did stop his foe
And Breg did kill him where he strode.
Then Sir Neal took Breg to fight
And piled the bodies two on high.

Queen Mel strode forth a single stride
And Sir Neal moved both up and right.
King Rex moved by the lady now
The Queen joined Neal at his bow.

Across the field Mel did run
And struck Catherine to the ground.
But white queen stood and raised her head
She cast a spell and Mel was dead.

King William moved to praise his bride
Rex did the same from side to side.
William reached in two short hops.
The evil Rex by Neal was blocked.

And so it was, the final fight.
Right there it was both gave their lives.
Sir Neal had fought when almost dead
And cut off cleanly Rex's head.

The fight was fought, the evil gone,
But for a time and not for long.
King William praised his fallen knight,
Sir Neal had swapped his life for right.

Then Taliban with Staff of Life
And Baldebeer with carving knife,
Made beasts of stone to guard the Pass,
And should one fail the other'd last.

One beast stood tall upon the stone,
All foes he could destroy alone.
The other Taliban did hide,
Where brave Sir Neal that day had died.

And so my tale has ended gay,
No evil walks the pass today.
While men are good and hearts are pure,
The light of Lar will shine for sure.

The Chapel of Ghosts 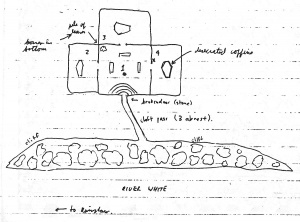 The Chapel of Ghosts

Before the party even crossed the River White, a wandering encounter tested our heroes. Three ghost-like apparitions called the party to a desecrated tomb. There, our heroes dispatched a neo-otyugh, cleansed the tomb, refused the temptation of looting the place themselves, and were blessed by the apparitions so as to improve their fighting prowess for the remainder of the adventure.

Three ghost-like apparitions appear hovering over the water about 120 feet away. From this distance you can hear them wailing in a foreign tongue.

If translated, they can be heard to be calling the group to follow them. If the group attacks or does not follow, then the three will randomly attack.

Following the ghosts leads the group to the far shore about a half league east of the island of Rivershaw. There, they land and lead the party to a nearby cave. The cave is dark, damp, and smells of death.

The narrow cleft ends in a pile of stone rubble which used to be a door. Above the door is a holy cross carved into the stone.

This is a small chapel with the statue of a man dressed in robes near the center. The man carries a staff in in his right hand and an open palm in his left. The three stone altars are fairly plain, but there are signs that an inscription "Watch Over These Warrirors" has been carved over.

In the far NW corner, a pile of leaves and twigs show upon closer examination to be a nest or lair. The area is soggy. Clearly, something lives here.

Revival of the Guardian of the Pass of Lar 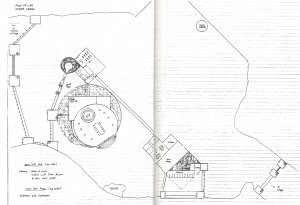 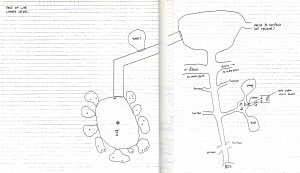 The Pass of Lar proved to be a narrow valley through the Shadowyarn Mountains. In the center of the valley stood a castle of sorts. Before encountering the castle, our heroes had to battle several large groups of hill giants. Despite livid protests from a battle-crazed U-Gene the Dwarf, the party skirted around the main force of the Army of the Orcs of the Red Claw. U-Gene wanted to just wade into the battle, but the prospects of fighting lotsa (sorry Tim) orc shaman was barely believable (sorry Jeff). Instead, the party continued towards the castle.

The Castle of Lar consisted of three sets of outer stone walls. As the party approached the first set of walls, the outline of creatures could be seen marking a watch. Stifling calls of "Hail O Great and Mighty" from Falstaff, our heroes decided to try stealth. Hylax had decided the poem described a giant chess game. So there the party sat in the middle of the pass trying to discover just what a game of chess had to do with things. Finally, they decided that the proper action would be to look for a chess board of some sort in the castle.

Falstaff polymorphed himself into a small bird and off he went. It took only a few moments to discover the large courtyard contained a series of white and black squares underneath a few inches of dirt. Convinced that the key to reviving the guardian was under a particular square, several orc guards were captured and their uniforms purloined for the purpose of disguising our heroes. Thus dressed, they entered the courtyard. Lifting up the square revealed a compartment with a vial of liquid and a space for a small statue. The statue was missing. Apparently, the small effigy had been stolen by some small burrowing mammals for a tunnel in the compartment was apparent.

Polymorphing into a small burrowing mammal, Falstaff went down the tunnel into a rats burrow. According to Hylax (an expert on small burrowing mammals), rats living in a closed ecosystem would know when an imposter rat was among them. However, Falstaff managed to get past the rats, their quasit master, and to a pool of flaming oil. Hanging above the pool of oil was the statue (being used as a holy symbol). The small caves contained vicious bats, but Falstaff polymorphed into a bird (I didn't know he could polymorph 3 times!), snatched the statue, and fled. Back on the surface, our heroes placed the small statue on the pedestal and poured the clear liquid on it. The statue came to life, and quickly killed the orcs in the castle (being impervious to spells and weapons). It is said that the villagers that fled into the mountains when the orcs arrived later returned and took control of the area.

Thus ended the adventures in the Pass of Lar. Next, our adventurers decided to try and disrupt the Meeting on Blood Creek. There was no news from the scouts, but rumors led the party to believe that the leaders of the Orc Nation were meeting with the Dark Man himself. An encounter none of the pary wanted to see, but all knew they should. 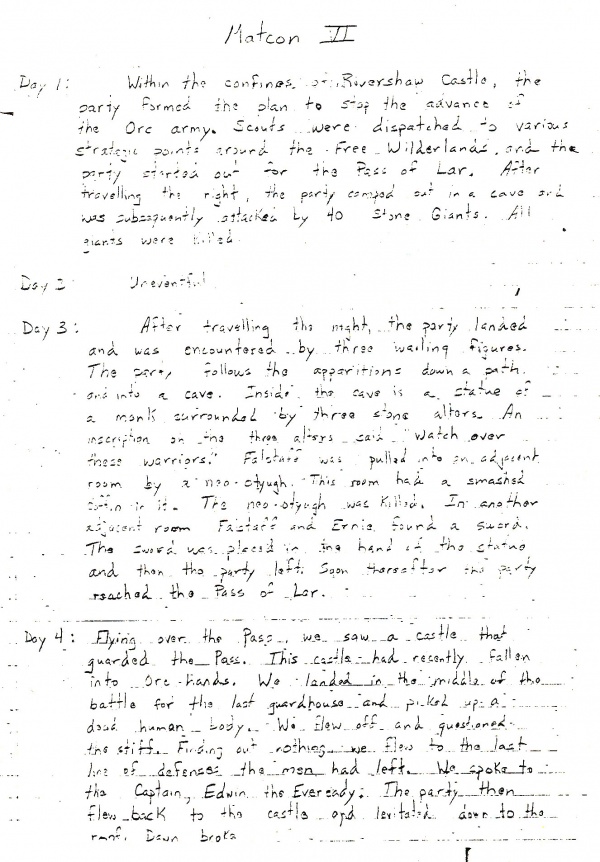 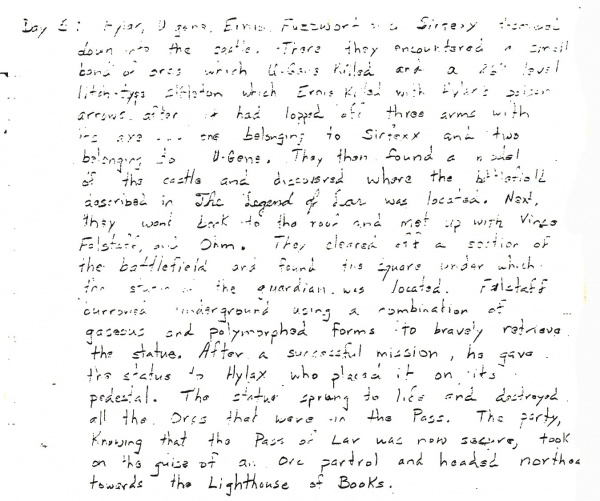