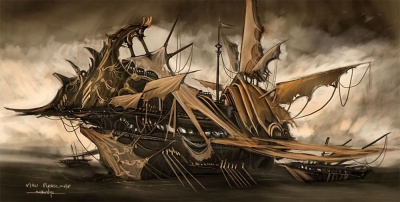 At the crossroads stands a wizened gnome. He looks angry. Around him are the signs of an epic battle. The bodies of fighters from the Old Kingdom, Portsmith and Eastern Reaches can be seen amidst the strewn bodies of villagers and townsfolk. No evidence of the demon gate - or even the demons themselves - can be seen. Only their handiwork remains.

While surveying the carnage, Wrane and Nomed spot a small urvile hiding in the smoke of a burning building. Frantically, he motions the two into the smoke-filled shell. What happens there is not known. As they leave the smoking ruins, Wrane and Nomed exchange glances and quietly join the party.

As you assemble around Hylax, he admonishes the party for releasing Sineater and the covenant of demons. After acknowledging that Morgan has given the party information, he charges the crew with going to Teufeldorf and finding the entrance to the Ranger's Gate. After the entrance is located, the party is to seek him out at Teufeldorf Castle. Under no circumstance should they enter the Gate without contacting him first.

Finally, Hylax tells each of you that NOBODY should be told of the release of the demons. This news will panic a population only recently liberated from the occupation by the Old Kingdom. This mission is secret.

With that, the gnome disappears without waiting for discussion.

So compelled, you begin preparation to head to the Western Reaches and the ancient city of Teufeldorf.

Much like the tales of the Great Storm of 904 TA during which Governor Linpool Lastra was taken by a sea monster at height of the storm's fury, so a tale springs forth in Portsmith in the weeks and months following of what is now called the Demon Raid of 907 TA.

While the facts remain obscured in the wild imagination and vivid storytelling of those who lived through the battle, two storylines have emerged.

Both share a common thread. Demons, led by a massive giant raver, poured from a portal summoned by the Old Kingdom wizards on December 11, 907 TA. Estimates range from several hundred to several thousand creatures - mostly urviles and cavewights. Over one hundred townsfolk were killed in the raid, and the town guard - predominantly paladins of the Order of Crusaders - were decimated. While damage to buildings was minimal, Jana's Keep was destroyed and a several buildings on Upper Castle Court near the Church of the Hearth burnt when one of the three Old Kingdom flying ships was taken down on top of them. The recently-constructed prison barrack also disappeared without a trace.

This is where the two storylines diverge. One holds that the demons were summoned by the Old Kingdom wizards in order to gain control of Portsmith and stage an invasion into the Eastern Reaches. Jana Blackfire and her brave paladins and clerics held the evil at bay until help from the Crown - in the form of a battle mage and several hundred battle-hardened knights arrived in support. It is known that the giant raver and much of its army escaped.

The more popular and widely held belief is that Jana Blackfire - in league with the Old Kingdom wizards - delved too deeply in the same black magic that was also the downfall of Linpool Lastra. They summoned the demons and then could not contain them. It is known that Jana Blackfire was killed.

What is known is that the wreckage of one of the Old Kingdom flying ships was discovered southwest of town. Several adventuring parties, hoping to find treasure, returned to town frightened and speaking of a death-strewn haunted hull covered in blood and a ghost below decks. Expeditions to the ruins quickly halted.

In the weeks following, the Church of the Hearth and the Order of the Silver Throne both provide support for the sick and injured. The Eastern Reaches knights remain for several weeks to provide protection, establish order and allow for the election of a new governor. On January 1, 908 TA, Nicholas Clay - father of Miranda Clay - is elected governor of Portsmith. A member of the Order of Merchant Keymasters and one of the oldest families in the city, Nicholas declines to move his family into the Keep and orders the partially-destroyed manor sealed citing safety concerns.

In his first act as governor, he establishes a new seat of government near the docks at a coffee house called The Java Bird. The establishment honors a parrot who is rumored to have saved the Clays from execution at the Barracks under Jana Blackfire's rule. Jareth, exhausted from his captivity, becomes a regular at The Java Bird, planning a trade in coffee with the Reaches. He gives Java a list of exotic beans to look for in Teufeldorf with careful instructions on how to ship them to Portsmith.

Simultaneously, a small chapel is erected on the crest of Crow Hill by the ever-growing number of followers of the Gyre. The chapel overlooks a natural whirlpool west of the town's lighthouse. Known as the Chapel of the Gyre, Sienna Bell is ordained as its first priestess and is tasked with running the chapel and recruiting operations. Vanoal, Wellspring of the Gyre, and about half of the followers from Portsmith purchase passage on the Wanton Wench to travel to the Monastery of the Mad Monk.

On December 18, 907 TA, the Wanton Wench leaves Portsmith heading north towards the Monastery of the Mad Monk.

Monastery of the Mad Monk

Arriving a day later, Vanoal and about twenty followers of the Gyre disembark at the island of the Monastery of the Mad Monk. With them, they bring tools and building materials to begin construction of a holy temple near the Netted Gate. Only Chironomous is allowed to climb the stairs to the newly-sanctified area, although recon by Java shows that the followers have begun digging a large pool at the top of the spire.

With her passengers delivered and upon Chrionomous returning to the Wanton Wench, the ship sets sail southwest towards Haggelthorn.

Arriving at Haggelthorn, Finn and the others make a final trip to Haggelthorn Hall. Elias is at home and appears to have been following the events in Portsmith closely. He accepts the Singleshadow jotter and six artifacts. At the news of Jon Singleshadow's death, he merely shrugs. He reports that the Family has already decided on a replacement and that business will continue uninterrupted. The news of Nicholas Clay's election also meets with a shrug and a quiet off-handed comment, "of course".

Smiling, Elias hands CJ a note from his son, Mortimer. "It seems you have made quite an impression on my son. He asks you to visit him when you get to Teufeldorf."

After paying for the completed contracts, Elias wishes the party good luck - lingering only to talk with Finn about some new business in Teufeldorf.

Arriving in Dragonsford on January 3, 908 TA, the Wanton Wench stops for supplies needed on the long voyage across the Frozen Sea.

While Morgan greets you with civility, he seems preoccupied with other matters. The ship is in need stores, and there is much work to prepare for the coming months. While on a supply run, Scylla drops in on Faldar and Lefty Deftdigits at the Trading Post. Some hurried conversations concerning the Druids is relayed, and Scylla departs with a determined countenance on his face.

As the Wanton Wench prepares to leave harbor, Glendower Banes shuffles excitedly from foot-to-foot. An iron frame consisting of two long runners and a massive iron-framed basket shaped like the hull of the Wanton Wench sits atop the grounds near the Merchant Docks. The gnome goes on for a number of minutes talking about using just a hint of power to get the Wench onto the ice and then to let the wind push her along the frozen sea towards Teufeldorf. He has some magical heating elements to keep the runners hot enough to keep the ice from freezing the ship in place and creating a layer of water that will provide lubrication for the... well, eventually you stop listening.

Lucky Lulu maneuvers the ship above the sled and drops her down into the basket - which is quickly fastened with steel straps to the Wanton Wench. "She's going to ride a little low and we will lose some speed in the water, but she will still fly. Gotta hand to Master Banes, this is one clever idea."

North of Dragonsford, the ship passes by Havelock's Keep - the site of your battle with Grixana. Soon, David Sinclair will be building an even thicker roof to protect from future dragon attacks, and Trell will be guarding her flock of wayward children.

Far to the east lies Sorrowsong Island and the pirates who have made their home there. A refuge in these waters, if ever needed. Java takes off to fly to Sorrowsong for a report - taking several days to make the journey. Returning wet, cold and hungry, Java reports that all is well at the castle. Java is particularly excited about a story told to her by Mourntune - a tale to make the trip to Teufeldorf pass quickly.

As the Wanton Wench passes the channel between Hidden Skerry and Tegel Manor, you can see two adults, undoubtedly Trell and David Sinclair, pushing children on sleds up and down the White Hill that runs towards the sea. You even spot a figure who might be Ronic Rump making snowmen with a gaggle of young ones.

Hidden Skerry is, well, hidden, but your encounters with the ships of Oliver Winters, Sea Baron of the East Winds, are uneventful. Rumor holds that the Stormcrow is calling a council of the Sea Barons and fireworks are sure to follow.

Finally, the ship passes north into uncharted waters. The temperatures drop and icebergs become more common. Wrane keeps an ever-vigilant lookout for the home of the Glacier Giant Munru. Even without the shard, he would love to take that adventure.

Meeting the shelf of expanding ice north of Tegel, and at Glendower Banes command, Lucky Lulu launches the ship into the air and sets it neatly down on the sea ice. The ship shudders slightly and then begins moving forward, slowly picking up speed. Down below, you hear Wendy the Wanton Wench giggle - sea ice tickles her underside.

What fate awaits you in Teufeldorf? You have been quested by Hylax to find passage through the lost Ranger's Gate. You have a picture and a key. How hard could it be? Fleetingly, you wonder if you will encounter the Dourmoors - who have, by their own account, taken up residence in the ancient city.

It is late at night, the sun-shortened day now long forgotten. Below deck, you can hear the sounds of a merry tune and the clanking of tankards. Teufeldorf will wait for another day. Tonight, you celebrate an adventure well taken.