The Tale of the Unspoken Valley 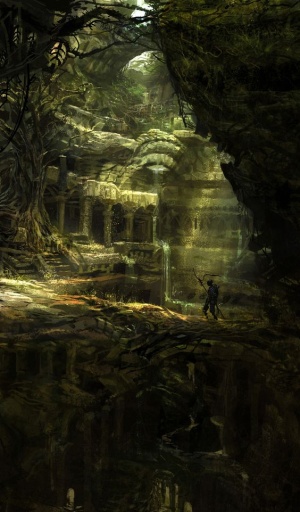 In the middle of the Second Age, the elves brought a large shipment of gold to the Reaches. It was meant to be used to fund the elven interactions with the humans and orcs who were quickly expanding their reach into this wilderness.

With the elves went four dwarven stone masons and several gnomish wizards. They were to use secret plans drawn up by the wizards to protect a stone temple whose building was to be overseen by the dwarves. The only concern was the location of the temple. In a small valley, more of a deep crevice in the thick forest floor, lived an ancient presence that the elves could sense but could not identify. While not evil, it concerned the elves that their path would take them past the entrance to that shady vale.

When the treasure arrived in twenty great iron chests, the expedition left with a guard of one hundred twenty elven warriors, the dwarven and gnomish masters, the elven Forestral of Loftwood, Zoe Pathfinder, and her hand-picked guide of nine Druids of Oakentree. This formidable party was thought to be more than a match for any ancient threat from the crevice.

It is known from the magical transmissions from the druids, that the expedition passed the valley without incident. Building had begun on the stone temples when something went terribly wrong. At first, a scouting party was late checking in. Then, they went missing. Next, the party sent after them disappeared. Soon, the Forestral was faced with a dilemma. She quickly decided to personally lead a party into the valley to determine the nature of the presence and negotiate peace. Shortly thereafter, the last message from the Forestral was received. It was simple and short.

Abandon treasure. Do not attempt rescue. Avoid this valley forever.

And so the Unspoken Valley was sealed. Complex and powerful Druid magic formed a maze to keep all out the area. No expeditions were sent to the valley and the temple was never visited. All traces of the expedition were removed from the general histories of the elven people. Still, rumors have persisted of an ancient evil deep in the boughs of Loftwood sitting atop a pile of elven treasure.