The Temple of Set 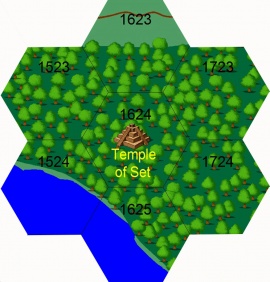 For almost a year, our almost daily adventures occurred in the strange pyramid temple of Set, God of Evil and the Night. Our game included some new faces and characters. Rob Dorrell played during this period with two paladins, Sir Rosebud of the Elderberry Downs and Sir Lillac of the Sarsaparilla Cliffs. This was also the time of Andy Haun, Paul Woods, Doug Scott, and such unique characters as Horace E. Speed (Master of the Flaming Oils) and Number Two. Also playing for the first time was a meager character named Barely B. Lievable and his master Jeff. While Barely B. Lievalbe was killed by ancient tribesman and replaced by Count Demoney and his son Count Demoney, Jr., Jeff remained as the only new permanent addition to the group. While the temple contained only 150 rooms, it took hundreds of adventures to completely rid the place of evil. It seems that trips back to town were as common as the giant squirrels that the party encountered in the woods. Little remains of the dungeon, monster, and treasure descriptions. However, a map of the entire dungeon has been recovered.

Our Adventure into the Temple of Set 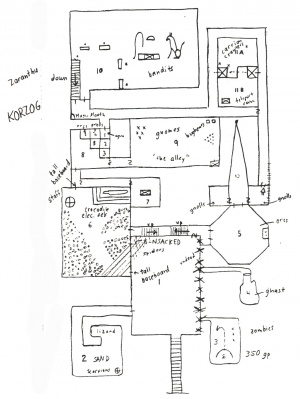 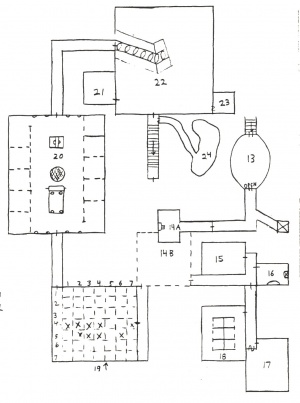 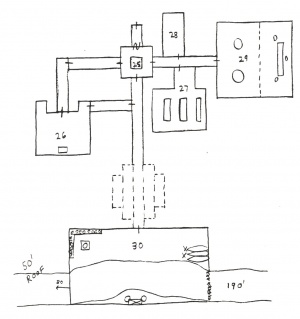 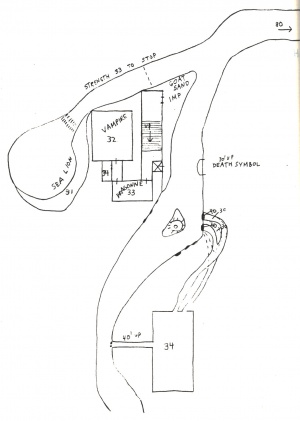 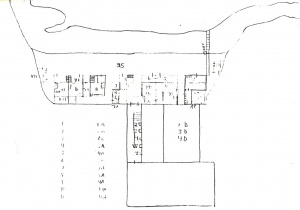 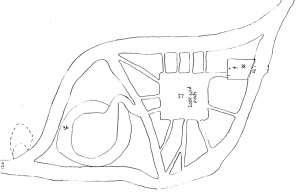 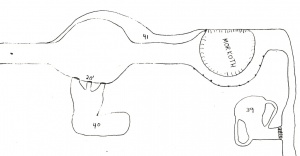 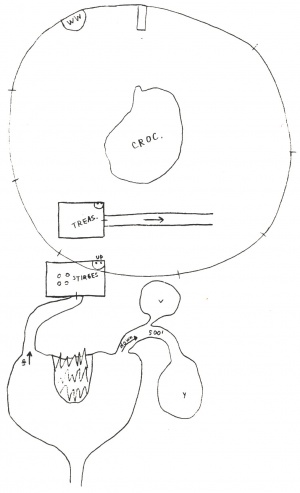 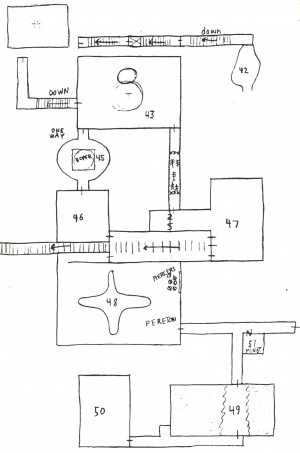 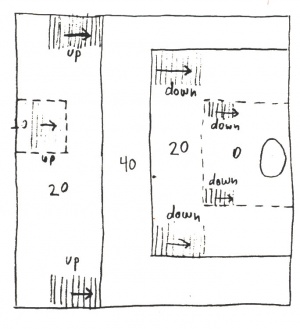 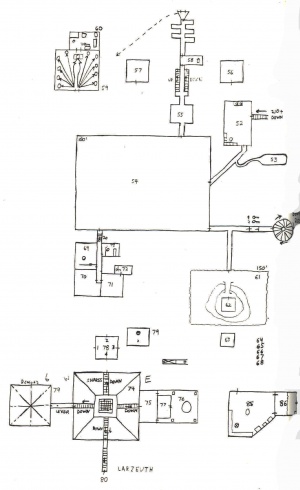 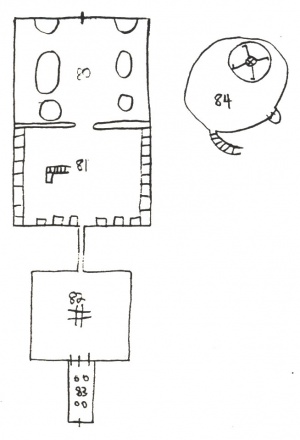 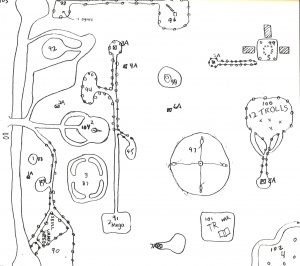 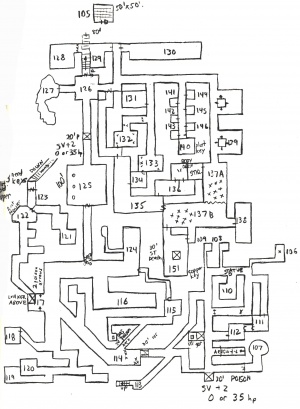 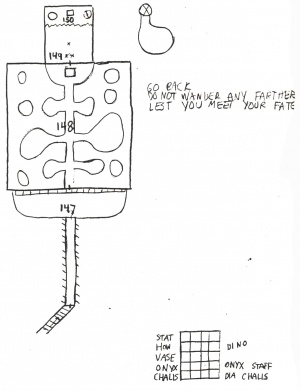 It is with aged hand that I write this log book. We are travelling down a seldom-used road to the center of an old forest. I have joined with some long-time comrades including Gareth the Stoic, Dahmagi, Losta Potential, Tex Rugalo, and Count de Money to adventure into the Temple of Set. From rumors that we learned in town, the temple which lies at the center of the nearby woods is shunned by cowards and the brave alike. The strange pyramid has stood in the woods as long as anybody can remember, a tribute to some long-forgotten race. The local historian tells me that the people who built the temple migrated to the Sands of Time thousands of years ago and were lost in a great sandstorm. It is also believed that there are five pharaohs buried in the pyramid. Karnoc, the youngest of the pharaohs, was the last to be set to rest in the temple, and I am sure that his tomb will be the first encountered. It is said that the first pharaoh buried in the Temple was Chibaca. He was the strongest of the strange leaders and also the most evil. Some even say that the magic-using priest wasn't really dead when he was buried. The only other bit of information that we have been able to gather concerns a great horde of treasure. There seems to be a riddle of sorts involving miniature relics. I guess we will figure things out as we go along.... as our adventurers randomly encounter some giant squirrels.

We have finally reached the clearing in the forest and our goal. The Temple of Set is a pyramid made of large stone blocks. On one side of the temple is an entrance leading down. Next to the entrance is a large block stained with blood. I assume that it was used for sacrifices of some sort, although it is impossible to tell how long it has been since the last offering to Set was made here. On the top of the temple is a large metal dish of some sort. Again, it is hard to tell exactly what the strange object's true purpose was. The final unexplained mystery to the Temple, upon our first encounter, is the giant circle of cultivated dirt centered around the temple. Who could have cultivated it? And what could they hope to plant there? Well, I guess we should cross the cultivated earth and begin our adventure....

That answers the question about the cultivated earth. It was our first encounter with the creatures soon to become known as "pool balls". It seems as if they live in the ground near the temple. The vibrations of our footsteps seem to have brought the creatures out of hiding. One of them even breathed fire. I guess we will have to string up some sort of rope system in order to get to the temple. I just hope that the pool balls aren't smart enough to untie the ropes....

Our journey into the Temple of Set begins with a set of stairs leading downward (what else?). The Temple of Set seems to be divided into five sections of roughly thirty rooms each. Each section is controlled by a different pharaoh and his minions. The first thirty rooms of the temple were the domain of the first pharaoh, Karnoc. In his domain there were many interesting traps, tests, and encounters. I have briefly annotated the map to show the encounters that I can remember. Of special interest was Room 9 where we spent many hours bowling with a group of gnomes. We took their gold ever so slowly. There were a number of not-so-friendly encounters that hindered us in our quest. Most noteworthy were the ghast in Room 4, the bandits in Room 10, the prison guard in Room 20, and the random monster-generating machine in Room 19. In Room 22, we walked through a false wooden hallway. The hallway collapsed, and we found ourselves in the middle of a large room facing a lance-wielding horseman. We managed to escape all these dangers and found ourselves on the banks of a swift underground river. In Room 30, we met the first pharaoh Karnoc. While he only matched our spellcasters in power, he was a fighter without equal. Luckily, our party had killed all of his minions, and our numbers eventually overwhelmed the pharaoh. In his hidden chest on the far side of the river, we found the first five of twenty artifacts eventually needed to conquer the Temple of Set. These artifacts included a wooden statue of Karnoc, a model boat, an alabaster vase, a small painted onyx casket, and an alabaster chalice. The meaning of these artifacts is lost so far. Having won the first battle, we boarded the boats on the river's edge. The river took us deep under the temple into the realm of the second pharaoh (Noyreg is his name, I think), a vampire, the Golphad priests, and several other denizens of the river. Read on if you dare. The river realm of the second pharaoh proved to be more treacherous than the first. Floating down the river through several large caverns, we saw a goat standing on a sandbank. Behind the goat was a door cut into the wall of the cave. On the far wall from the door was an ancient symbol of death. Well, the goat proved to be an imp (who later killed Don Shula while we camped at night). The door into the cave wall led to the lair of a sleeping vampire. Luckily, our party was turned back by a dragonne guard and we never opened the vampire's coffin. We did get attacked by the sea lion (Room 31) and the cave dwellers (Room 34). It was then that we met the Golphad priests (Room 35). The river was blocked by an iron gate, and the keys that we needed were in the cliff dwellings of the priests. Golphad priests had only two forms of attack: daggers and magic missile spells. The magic missiles about did us in. We escaped with the key, but we gathered no treasure. Opening the gate we journeyed on through the lair of a salamander (Room 37), a morkoth was avoided (Room 41), and the river ended in a flaming pool and a roomful of stirges. After some encounters with ropers, peryton, piecers, minotaurs, and the like, we entered the lair Noyreg, the second pharoh of the Temple of Set. In a strange three level room, we battled for an entire day. The party dispatched 3 hill giants, 40 bugbears, 10 goblins, 6 minotaurs, 2 shambling mounds, 4 unidentified mishappen minions, and the pharaoh. Of course, the fact that we were aided by 35 dwarves and 20 gnomes should be mentioned. Afterwards, we left with five new artifacts and headed for the third pharaoh. Larzeuth would prove to be an undead priest of awesome magical powers.

The third pharaoh, Larzeuth, was hidden in his pyramid (Rooms 74-79). The pyramid was stocked with demons and snakes of all varieties. Besides the nasty critters, Larzeuth's pyramid was guarded by a series of teleportation and lever traps. Before the pyramid could be conquered, we adventured through a maze of rooms locked by a myriad of keys. The keys were found, the monsters dispatched, and the pharaoh killed. The treasure of Larzeuth included several magical swords, daggers, and a golden key. The artifacts of Larzeuth included a wooden statue of the pharaoh, a small onyx mummy, a pearl chalice, an alabaster vase, and a small statue of a pyramid. Little did we know that the golden key would be combined with a copper key and a platinum key in order to face the Chibaca, the fifth and greatest pharaoh. However, the copper and platinum keys were within the realm of Hobake, the fourth pharaoh. Again, we were faced with a great adventure.

Before we reached Hobake's maze, we adventured into a very large cavern. The cavern was filled with tall grass. Among the grasslands were several large clearings. In the clearings, we found ogres, trolls, and the most fearsome creature of all, the Tyrannasaurus Rex. For many years thereafter, a certain member of the party quested for a T.R. he could call his own. Eventually, we figured out the teleporting devices in the grasslands. Using them, we teleported into a maze of rooms.... the lair of the fourth pharaoh. We found out that the fourth pharaoh, Hobake, guarded his predecessor, Chibaca. Hobake did not have a tomb as such, and the party encountered the pharaoh several times. Numerous traps were strewn about Hobake's realm, but my fellow adventurers and I managed to survive. We found a parchment which read:

Hurry, do not stop for long.
Death comes quickly.
Watch out for the B---.


We never found out what the B--- was, but plenty of other dangers awaited us. The final stand against the pharaoh at the top of the stairs (Room 123) was almost more than the party could handle. Defeating him, we gained a small model sword, a lead statue of Hobake, a model of a child's slide, an alabaster vase, an onyx skeleton, and a ruby chalice. Using the three keys, we quickly moved down the stairs. What awaited us was a large room (Room 148) filled with treasure and a magic mouth telling us:

Go Back.
Do not wander any farther lest you meet your fate.


We ignored the treasure, and it turned out to be an illusion. In the final room we faced the fifth pharaoh. Disregarding our own lives, Chibaca was attacked relentlessly. While a great magician, the fifth pharaoh was not a fighter, and he was quickly killed. In his room was a bookcase containing twenty cubicles. We figured that the twenty artifacts collected from the other four pharohs belonged in the case. We put the items into the case (in the wrong order), and the ground started shaking. Searching behind the drapes at the far end of the room, we found a set of spiral stairs leading up towards the surface. Climbing them , we entered into a large chamber. This time the chamber was filled with real treasure: gold, gems, jewelry, and magical weapons were there for the taking.

But lo and behold, the pool balls that we had not killed were there too. No time to fight, as the earthquake worsened. If we had only killed the last of those critters while on the surface, we would all be rich men. Instead, we had to be satisfied with saving our lives and ridding the Temple of Set of its evil. As we found the path leading back towards the town, we heard the last groan of the Temple of Set, God of Evil and the Night, as it collapsed. 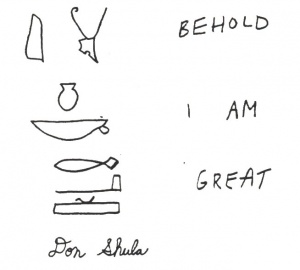