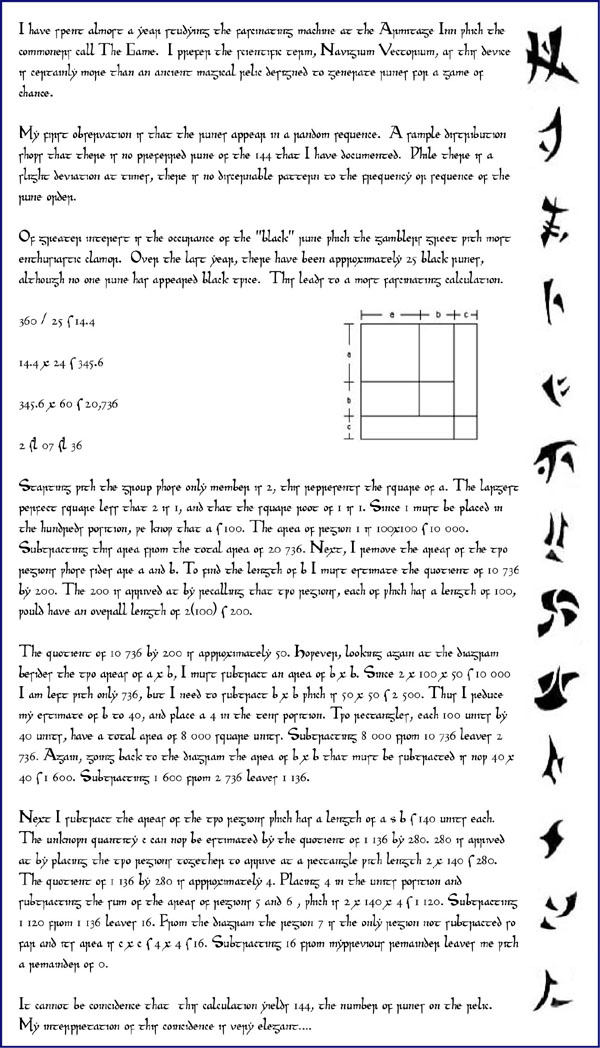 In the times before the dawn of history in the Realm, a race of beings called the Tinkerers existed in the multiverse. A curious race, they created a vast teleportation network that would move between the planets, allowing their people to visit strange and exotic places. The Tinkerers were pacifists. They had no word for war and did not create weapons of destruction. In their wisdom, their network of teleportation nodes was protected so that others could not use them. In this way, the Tinkerers could avoid allowing hostile races to gain control of the devices to use them for war. As with many explorers, the Tinkers were destroyed not by the enemies that they could see, but by a mutant strain of bacteria that passed harmlessly through the teleport devices and sterilized the entire population before its effects were known. In the millennia that followed, the devices were buried, lost or forgotten on most of the worlds visited by the Tinkerers. A few clever individuals discovered "keys" to the devices, but their use was so dangerous that most perished in their research. 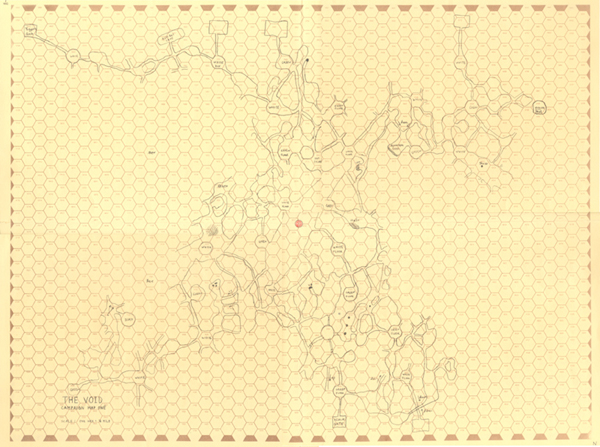 Adventurer's Map of the Void

The teleport network the Tinkerers constructed consists of several components. The first is a powerful "hub" which exists only at points in the multiverse where lines of energy cross. These hubs are collectively called "the Void", as they are all found in the same strange black-walled caves. Around the edges of the hub are permanent connections to other lands, archways in which keys must be placed to gain access, these archways are called "gates". There are rumored to be 28 gates in the hub that includes the gate to the Realm. It is unknown if other hubs exist or how they might interconnect.

From the Void: A key is required to make the jump from the Void back to the Realm (or through any other gate). The keys are artifacts found in the Void. They cannot be taken from the Void and appear to be randomly distributed with the cave once used. In addition, the keys never appear in the same form twice. The gate to the Realm does not necessarily open to the NV, nor does it open to the same place in the Realm. However, as long as a key is in place, a connection to the world is opened. Once the keys are moved, the connection is lost.

To the Void: Access to the Void from the Realm is accomplished via a large device called the Navigium Vectorium (NV). By using the NV, one can jump from the Realm into the Void, although the connection lasts only a few seconds and occurs on a very bizarre and hard to predict schedule. From an adventurer's logbook, arrival in the Void is always the same. The traveler appears in a very large cave beneath a shimmering globe. They are falling in the air over a narrowing shaft. The NV is located in Teufeldorf in the Armitage Inn. It is rumored that a few powerful artifacts also allow limited travel to and from the Void.

An adventurer's map to the Void was created in July 885 TA during the Adventures in the Void. Subsequent research has uncovered several additional gate descriptions which are summarized below. 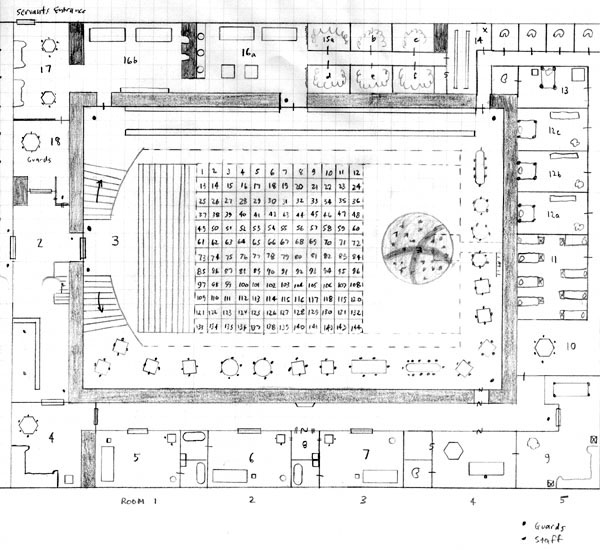 Map of the game room at the Armitage Inn

In the center of the gameroom at the Armitage Inn is the Navigium Vectorium.

The gameroom of the Armitage Inn is an amazing sight. The room itself is very large, approximately 150 long and 100 feet wide. The ceiling is about sixty feet high. The walls and ceiling are carved of rosewood with deep red velvet wallpapered panels inset around the edges. The floor is made of alternating white and black marble squares. A bar of polished rosewood runs the entire length of the northern wall. A number of goblin bartenders run along the length of the bar serving drinks to numerous guests. Two sweeping staircases along the west wall lead up a balcony level. The southern side of the room is filled with small gaming tables, jammed with gamblers of all types.

The focus of the room, however, is on the sunken 'pit' which dominates the center of the room. Steps lead down into the pit which has a large 12 x 12 grid of runes carved into floor. Arranged around the grid and strung along the steps are a large number of gamblers. They are frantically tossing small colored bags of coins tied with black and white strings onto the runes. Then all attention turns to the centerpiece of the room, a massive shimmering translucent white globe which appears to be made of smoke. On the surface of the globe are faint grey-black runic symbols. Surrounding the globe are two golden metal hoops approximately 50 feet in diameter. The hoops encircle the smoky orb in a swirling manner, crisscrossing each other with a faint whooshing sound. Periodically, the hoops stop for a moment. Where the hoops are crossed, the rune underneath glows in a bright red blaze. A strong smell of ozone follows the flash of the rune, and the hoops begin spinning again. As if suddenly brought to life, several small goblins run around the grid picking up the bags and tossing them to a rather nasty looking troll dressed in a black linen suit. Once in awhile, bags will rest on the rune that was fired. The bettor, jumping up and down with excitement. The action never seems to fade in this mad-capped game of magical roulette.

About 10 feet above the swirling hoops and globe is a narrow ledge built of wood reachable from the gameroom by a narrow staircase up from the balcony. On the staircase are a number of men, dressed in yellow robes, hypnotically watching the device. Periodically, a man will jump into the orb. The globe will stop as it always does, and a few seconds later, the chopped remains of a yellow priest drops through the bottom of the device. Quickly, several goblins rush out and remove the remains through a door in the northern wall.

Signs on the wall state the following odds:

Every few weeks, a rune will flash and the entire ball will turn pitch black. When this happens, strange things happen. Many times, nothing will happen or just a strange odor will be encountered. Other times, sand or water pours from the bottom of the device. Once and a great while, a creature will drop from the globe.

The Navigium Vectorium (NV) works on the principal of matching nodes. A connection is established when the rune on the NV at the Armitage Inn matches the rune on the corresponding device in the Void. As the runes change every minute, these connections are brief and unpredictable.

With 144 runes on each ball, the chance of both matching are:

With one of these actions occurring each minute, you will get a match:

To use the NV, a user must jump at exactly the right time.