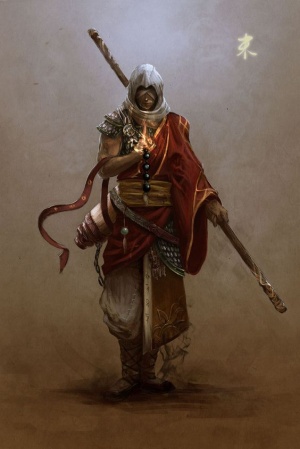 Although there have been many scholarly studies of the nature of runes in the Realm - their origins, workings and powers are still largely unknown to the general population. The Collegium Magicium has a small cabal of researchers who have made some progress on the topic in recent years. However, there have been only a handful of Rune Masters - whose knowledge seems to be independent of the established centers of learning. The Rune Masters can carve rune weapons and harness the full power of their magic.

The only known, living Rune Master in the Reaches is Wan Fu. Held prisoner for over a century in the Shrine of the West Wind, he was released when the shrine was broken in early 900 TA by the Tang Emperor Shiba. Wan Fu was an unwitting part of the failed invasion of the Western Reaches. Released from captivity, he has agreed to serve the Crown - carving rune weapons and providing guidance.

Appearing as a small ratman, impossibly ancient, Wan Fu is bent and uses a gnarled staff for walking. A long thin white beard and mustache flow over his simple robe. Thick glasses make his eyes huge. He appears unarmed. Wan Fu is currently in residence in the Cave of Runes which was discovered and sieged by the Crown in September 888 TA. Wan Fu is also a frequent guest at the Armitage Inn in Teufeldorf.