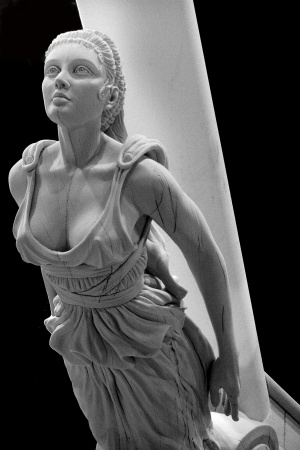 Figurehead of the Wanton Wench

April 1, 907 TA. It is with great hope that I undertake my new assignment as the Captain of the Wanton Wench. Although I have never assumed command where the choice of crew was made without my consideration, this is a too important of a mission to decline. I am honored that the Overlord would put his trust in my skills. If successful, Henry Hyde may become a Fleet Captain for the Old Kingdom - who would have thought?

April 15, 907 TA. After several weeks of training in the Tormod Bay, I am in awe of the Wanton Wench. A magical ship from the Second Age - who could have guessed such wonder even existed. I have seen the ship fly and turn invisible. I have spoken with Wendy, the spirit that lives inside the masthead. This vessel is a true miracle.

April 16, 907 TA. We are 250 miles north northwest of Wildgarde our last port of call before beginning this voyage. The ship is at the extreme edge of Tormod Bay (Hex 7720), and we are headed north. Tomorrow, I get a final mission briefing from Victor Kane before he teleports back to the Old Kingdom. I am filled with pride.

April 17, 907 TA. My meeting with Kane was illuminating. Our mission is both simple and impossible. The Wanton Wench is a most treasured ship of Overlord Theodric XIX himself, and I have been told that its return is of paramount importance - the ship must be cared for at all costs.

Our approach is to fly north over the extreme southern edge of the Wolfshaunt Mountains and set a heading due north towards the Inner Sea. King Goodfellow has blockaded the northern seas to such an extent that none of our ships can enter using that route. So, we are going to arrive from the unprotected south - who guards against a flying ship?