Demons of the Abyss Gate 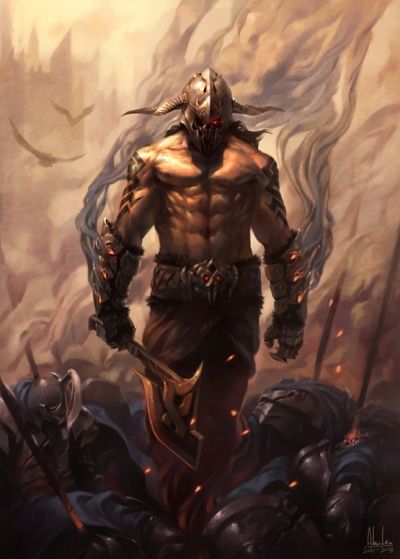 Little is known of the land beyond the Abyss Gate. It is known that during the First and early Second Ages the classification of creatures called "demons" and "devils" was intertwined, an academic hodgepodge of legends, rumors and myths. In 701 SA, after the First Demon War, the Crown sent a single expedition behind the Abyss Gate with the goal of exploration. The sole surviving member of the adventure returned in madness. Byron Gordon, a diplomat, spoke of a dying land with a dark sky, lit by a dim red sun almost devoid of plant and animal life. Ancient ruins and fragments of a decayed civilization speak of more prosperous earlier times. The current inhabitants were small bands of what we now know as demons, living in the ruins of the land's former glory. The diplomat's party was taken for food, breeding stock, or entertainment - a distinction that seemed blurred in the survivor's mind. Living only a few weeks after his return, a single poem gives us the best insight into the harsh lands of the Abyss.

It is now known that the Demon Wars were not waged from the Abyss Gate, for too few demons remain there to wage such a conflict. Raiding parties into the Reaches have been reported throughout the Ages, and a number of species of Abyssal demons have been recorded - although none have been captured or studied. By far the most common denizens of the Abyss found in the Realm are quasits and other tiny demons that act as spies and familiars for depraved wizards. The succubus is also found in the Realm, feeding on the flesh and lust of those who cannot avoid its charms. Vrock, hezrou, glabrezu, and manes have been sighted first-hand, while nalfeshnee, marilith, and balor remain demons of legend only. The most recent raids into the Reaches were carried out by a cunning demon named Abraxes, now thought to be the most powerful demon in the Abyss. Other leaders from past Ages have been: Demogorgon, Jubilex, Orcus, and Yeenoghu - although no sitings have been made of these demon lords since 832 TA during the Brotherhood of the Seven.

I had a dream, which was not all a dream.
The bright sun was extinguish'd, and the stars
Did wander darkling in the eternal space,
Rayless, and pathless, and the icy land
Swung blind and blackening in the moonless air;
Morn came and went—and came, and brought no day,
And demons forgot their passions in the dread
Of this their desolation; and all hearts
Were chill'd into a selfish prayer for light:
And they did live by watchfires—and the thrones,
The palaces of crowned kings—the huts,
The habitations of all things which dwell,
Were burnt for beacons; cities were consum'd,
And demons were gather'd round their blazing homes
To look once more into each other's face;
Happy were those who dwelt within the eye
Of the volcanoes, and their mountain-torch:
A fearful hope was all the world contain'd;
Forests were set on fire—but hour by hour
They fell and faded—and the crackling trunks
Extinguish'd with a crash—and all was black.
The brows of demons by the despairing light
Wore an unearthly aspect, as by fits
The flashes fell upon them; some lay down
And hid their eyes and wept; and some did rest
Their chins upon their clenched hands, and smil'd;
And others hurried to and fro, and fed
Their funeral piles with fuel, and look'd up
With mad disquietude on the dull sky,
The pall of a past world; and then again
With curses cast them down upon the dust,
And gnash'd their teeth and howl'd: the wild birds shriek'd
And, terrified, did flutter on the ground,
And flap their useless wings; the wildest brutes
Came tame and tremulous; and vipers crawl'd
And twin'd themselves among the multitude,
Hissing, but stingless—they were slain for food.
And War, which for a moment was no more,
Did glut himself again: a meal was bought
With blood, and each sate sullenly apart
Gorging himself in gloom: no love was left;
All the land was but one thought—and that was death
Immediate and inglorious; and the pang
Of famine fed upon all entrails—demons
Died, and their bones were tombless as their flesh;
The meagre by the meagre were devour'd,
The birds and beasts and famish'd demons at bay,
Till hunger clung them, or the dropping dead
Lur'd their lank jaws; sought out no food,
But with a piteous and perpetual moan, perished,
Famine had written Fiend. The world was void,
The populous and the powerful was a lump,
Seasonless, herbless, treeless, manless, lifeless—
A lump of death—a chaos of hard clay.
The rivers, lakes and ocean all stood still,
And nothing stirr'd within their silent depths;
Ships sailorless lay rotting on the sea,
And their masts fell down piecemeal: as they dropp'd
They slept on the abyss without a surge—
The waves were dead; the tides were in their grave,
The moon, their mistress, had expir'd before;
The winds were wither'd in the stagnant air,
And the clouds perish'd; Darkness had no need
Of aid from them—this was the land.