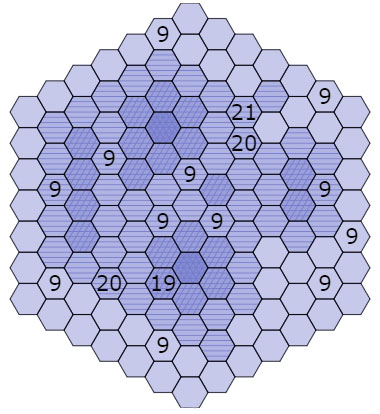 It is 918 TA. Ten years of peace and tranquility have passed in the Realm.

The Eastern and Western Reaches have enjoyed verdant abundance. The gnomes and dwarves have similarly prospered, their numbers and wealth increasing. Unbeknownst to the common folk, however, the threat of war is increasing as the treaty between the Reaches and Old Kingdom comes to an end.

A coded message, carried by Manark the Code Master, is discovered by Fuzzwort, acting as ambassador to the Old Kingdom. Decoded, the defense plans for the Old Kingdom are revealed. The Overlord has his army on high alert, but the Reaches have the upper hand.

After much consultation, the Three Kings make a decision - a pre-emptive strike against the Old Kingdom will be executed this year.

The Elves of the Shimmering Twilight retreat into the forests - declining all parlays for aid in the upcoming war.

News reaches Fuzzwort of a small band of rebel Elves of the Radiant Dawn mustering in Sarth. Eager to join the battle, their actions are not sanctified by the Elven Queen.

The Orc Nation, their numbers decimated in the Second War of the Reaches, have settled peacefully (mostly) in the north. Some orcish warriors volunteer for the Eastern Reaches army. Likewise, Sandal, their leadership broken and their cities destroyed, have settled peacefully (mostly) in the south. Some Sandalese warriors volunteer for the Western Reaches army.

In early February, the armada of the Reaches - fully loaded with thousands of knights, dwarves and gnomes - begin the arduous journey across the Great Sea towards the Old Kingdom.

A planned strike against the northern city of Deep Port in March is successful in establishing a beachhead for the Reaches forces. Thousands of dwarves are disgorged into the mountains north of the city, and the Reaches knights take command of the besieged city. First blood is drawn.

Plans to move another strike force to the south stall in late March with the arrival of a flotilla of fire ships - aged Old Kingdom warships filled with explosives designed to suicide ram into other vessels. Arriving from Bargsea, the flotilla successfully rams the Reaches fleet, a host of gnomes and knights are burned or drowned. The war has begun in earnest.

As the Old Empire army moves east to intercept the invaders, a small force of Rebels - mostly elves - arrive at Wintham Cross on the far western edges of the kingdom. Rumored to have come from Sarth, the Overlord's generals dismiss the elves as a ragtag band of troublemakers.

Meanwhile, May and June finds the dwarves successfully sieging northern cities along the mountains - Winterberry Croft and Westhaven both fall. While Dimtown and Embervein remain in Old Kingdom control, the war is going poorly for the Overlord. At the end of June, news reaches the Palace of the Rebels' successful siege of Wintham Cross. Again, the magnitude of the news is ignored.

July brings the first large-scale open field engagement - the Battle of Westhaven - a bloody affair with heavy casualties on both sides. After several days of battle, the dwarven warriors claim the field.

On the coast, the Old Kingdom attempts to regain control of Deep Port with some minor success using a second flotilla of fire ships from Whitecliff. The Reaches navy is contained in the north.

At the end of July, the Overlord receives word that the Rebels have sieged Greymaw Castle to the east. Perhaps, the elven resistance has been underestimated.

In August, a Western Reaches counterattack keeps Deep Port under the knight's control. A final barrage of fire ships from Brittlebean sinks several companies of knights. The Old Kingdom's navy expended, however, the Reaches have free reign on the sea.

The final insult comes in late August as the Rebels notch a third victory sieging Archdale. Although subsequent attacks on Dewbury and Dandlestone Castle fail, the resolve of the elven Rebels will not again be underestimated. The general assigned to defense of the west is summarily executed by the Overlord.

As the campaign season draws to a close, only minor skirmishes take place. The Western Reaches knights score an open field victory at Malgrave. All sieges fail as the Reaches troops retreat to their ships for the return voyage to their homeland.

The damage to the Overlord's reputation has been done. The tranquility of the past decade is shattered. The Three Kings have scored an overwhelming victory against the Old Kingdom. With the certainty of a prolonged war now inevitable, the Overlord's general begin preparations for the new year - their coffers deep, their armies powerful and their resolve absolute. The Invasion of the Old Kingdom has just begun.