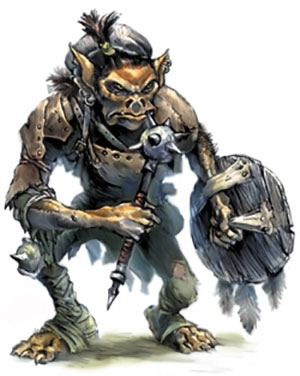 At first glance, goblins may be thought of as the smaller kin to orcs - two races with very intertwined histories. In fact, goblins are a separate race that may share a common ancestry. While much less common than their larger cousins, goblins are still found throughout the Reaches. Goblins are short, ugly humanoids (by most standards) that stand just over 3 feet tall. They have the slightly pointed ears of orcs, and skin tones vary from green to gray. Goblins tend to have jagged, protruding teeth. Goblins are found throughout the Orc Nation and, while uncommon, are found south of the River White. Most goblins belong to an orcish clans where they may hold high positions as shaman or warriors, although goblin leaders are very rare within the ranks.

Because of their size, goblin capabilities are often underestimated. Goblin warriors - who often act as shock troops or shortbow archers in the orcish military - are ferocious, unrelenting, and courageous. When filled with battle lust, they tend to be destructive and voracious. Goblins sometimes ride dogs or large boars in battle. Because of their nature, most humans think of all goblins in terms of their warriors. Most adventuring goblins, however, come from the ranks of goblin shaman and alchemists. As a race, goblins are more accomplished spellcasters than orcs, and many orcish leaders employ several goblin shaman to provide magical assistance and support. Goblin adventurers are usually curious and inclined to explore the world, although they do so on the fringes of civilization or in the wilds.

There are no goblin towns, and most humans believe them to be too lazy to build one. Nomadic by nature, however, goblins will build primitive tribal structures - always something that can be abandoned without great loss. If available, goblins will inhabit abandoned structures or raid farm houses for shelter. Goblins do not farm, instead they hunt and gather from the forest or steal from outlying farms. Tales of goblin cannibalism are widely unproven.