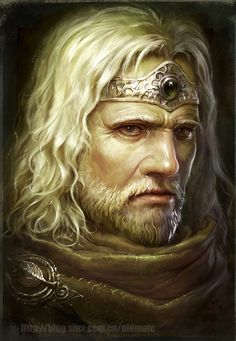 Little is known of the childhood of Gregory. The records of the Order of Crusaders show Gregory taking the Paladin's Test of Faith in 765 TA. According to the Order's records, his birth is recorded as 744 TA. King Gregory appeared throughout his reign to be a lawful good human paladin in his mid-thirties - although his great age belied a potential elven heritage.

A hero of the ongoing campaigns in the Orc Nation and Sandal, Gregory married Laura (later Lady Laura) in 795 TA, an elven archer captain. Each continued their service in the war until Greogry was crowned Paladin King of Teuefeldorf in 817 TA. He held the position of Paladin King of Teufeldorf until his death in 840 TA.

Under his popular leadership, the City-State united most of the smaller baronies in both the Western and Eastern Reaches. King Gregory also rebuilt and established a number of frontier castles and garrisons to protect the people from the Orc Nation to the north and Sandal to the south. Economically, the City-State flourished with trade routes opened with both the Old Kingdom and the Tang Empire. During the early days of his reign, Teufeldorf enjoyed its golden age.

In 818 TA, King Gregory founded The Order of the Knights of the Kingdom to provide an organizational structure for the swelling ranks of those signing up for military service. The Order disbanded in 840 TA.

King Gregory successfully defended his kingdom during the Second Demon War of 821-828 TA. Both through his standing army and the successful use of powerful henchmen, the demons were kept in check until they could be bound in October 828 TA by Hylax the Barker.

In October 832 TA, King Gregory surrendered the city of Teufeldorf to the forces of The Shadowland Empire. The city was in danger of destruction by a magical storm summoned from the deepest sea. Retreating to the Free-City of Paddington, King Gregory waged a long war against the Brotherhood and their ever-growing Shadowland Empire. As his army dwindled, he relied more heavily on his network of powerful allies.

In 840 TA, the Brotherhood was defeated by the destruction of the Netherworld and the release of the Elder Gods. Shortly thereafter, King Gregory was defeated in hand-to-hand combat with Hastur, the Stone God. Rumor holds that King Gregory's body lies entombed beneath the Shadowkeep.