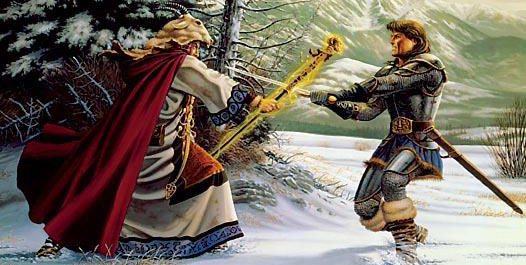 Ernest Goodfellow in his younger days.

What would the Realm be without its heroes?

The Classic Campaign began as two AD&D adventures during our Christmas break from college in 1981 - The Accursed Tomb of the Zombie Lord and the Tower of Skaldor the Mutator. These marked the first adventures in the Third Age of Man. The initial party consisted of Sir Zachary, Lord Treadway, Condor the Cleric, Father Guido Sarduici, Count Demoney III, Ikcin Namffoh, and Hylax the Barker. Since then, many great characters have come and gone - although the memories of both their triumphs and misadventures remain strong.

Today, the Classic Campaign continues - 35 years of mundane time and 100 years in the Realm and counting. The current roster of characters represent three kings and some of the most powerful figures in the Realm. There are many great adventures to come!