Raid on the Accursed Tomb of the Zombie Lord 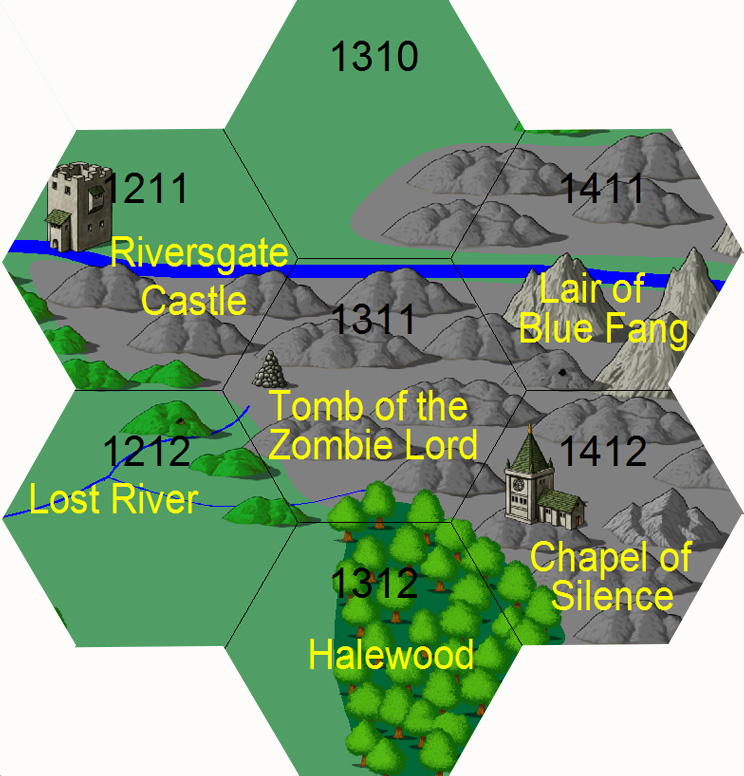 In which The Party traveled to a crypt in the Iron Hills to capture a magic sword from the Tomb of the Zombie Lord....

Written documents concerning the Accursed Tomb of the Zombie Lord are scarce. The adventure began as the party, newly-formed and ready for adventure, journeyed deep into the Iron Hills east of the City-State of Teufeldorf. There they sought to find the legendary sword named Legion. This sword was reputed to have the power to create and control undead armies. As the legend goes, Legion was buried deep inside the foreboding Tomb of the Zombie Lord. No mortal had ever tried to enter the crypt, but the lure of precious minerals had prompted some evil men to begin a mine on the far side of the hill in which the crypt was set. It was this mine shaft which first penetrated into the ancient vaults. The party, hearing of this discovery, made plans to sneak into the mines, enter the tomb, and make off with the sword before being found out. In such a manner, the party set off immediately for the mines. 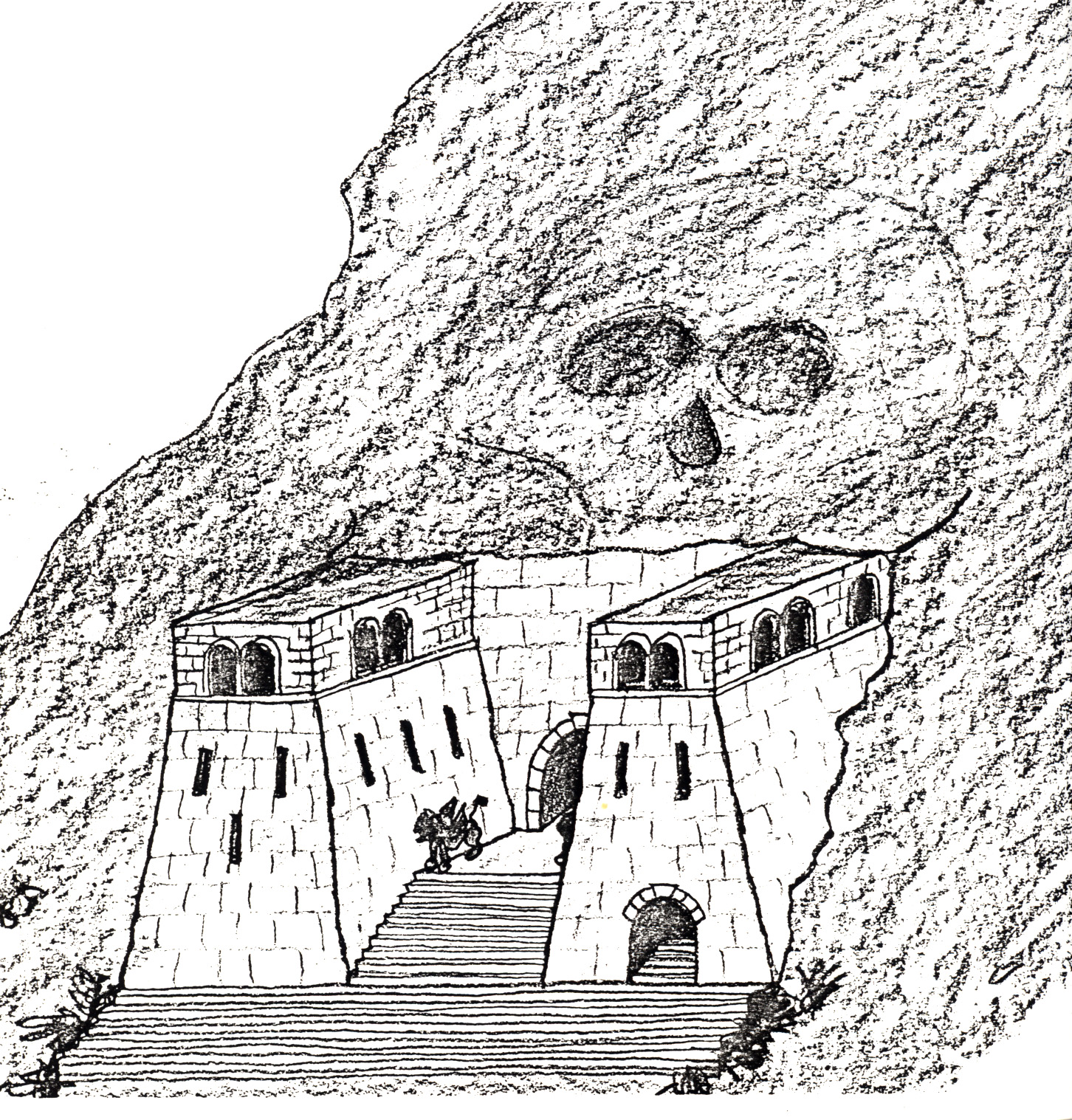 While a log book was never kept, several members of the party were wise enough to make some maps. These maps, forgotten in the excitement of battle, were stuffed into the backpack of Lord Treadway. Later, relatives of the late adventurer gave the maps to a historian in Teufeldorf. There they sat until now. A brief description of the events of this adventure accompany the maps. 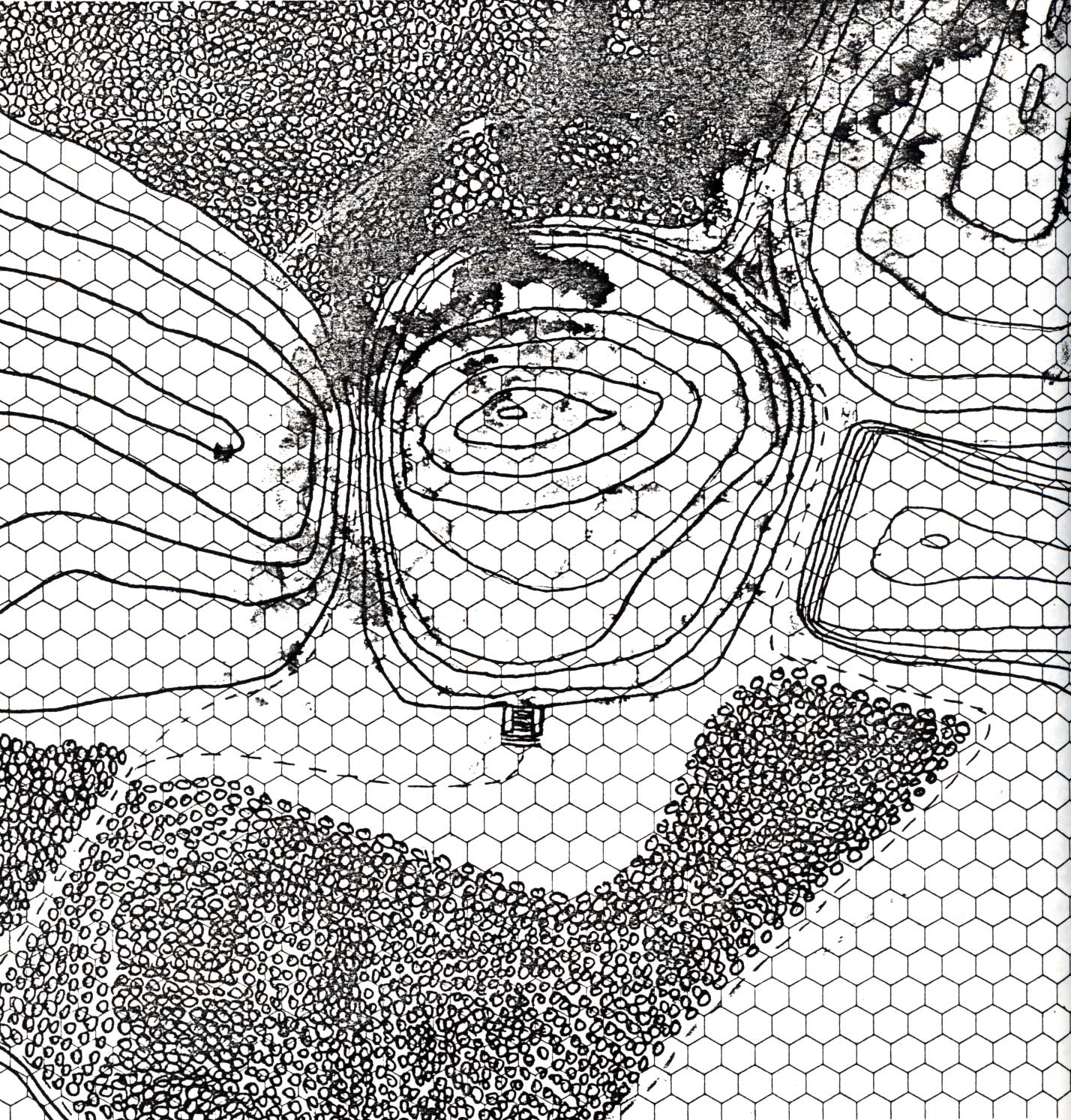 Tomb of the Zombie Lord Environs 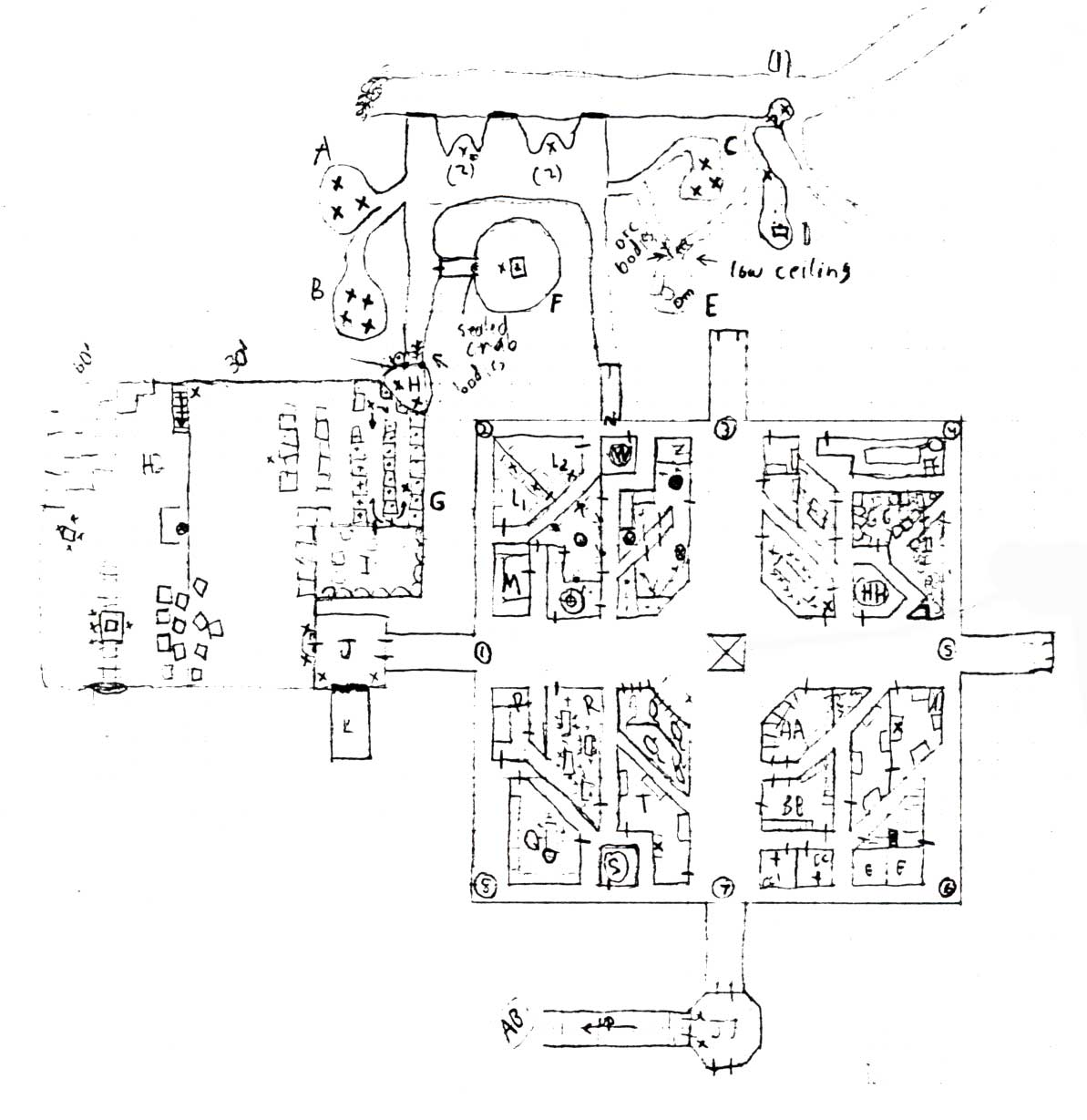 Tomb of the Zombie Lord - Level 1 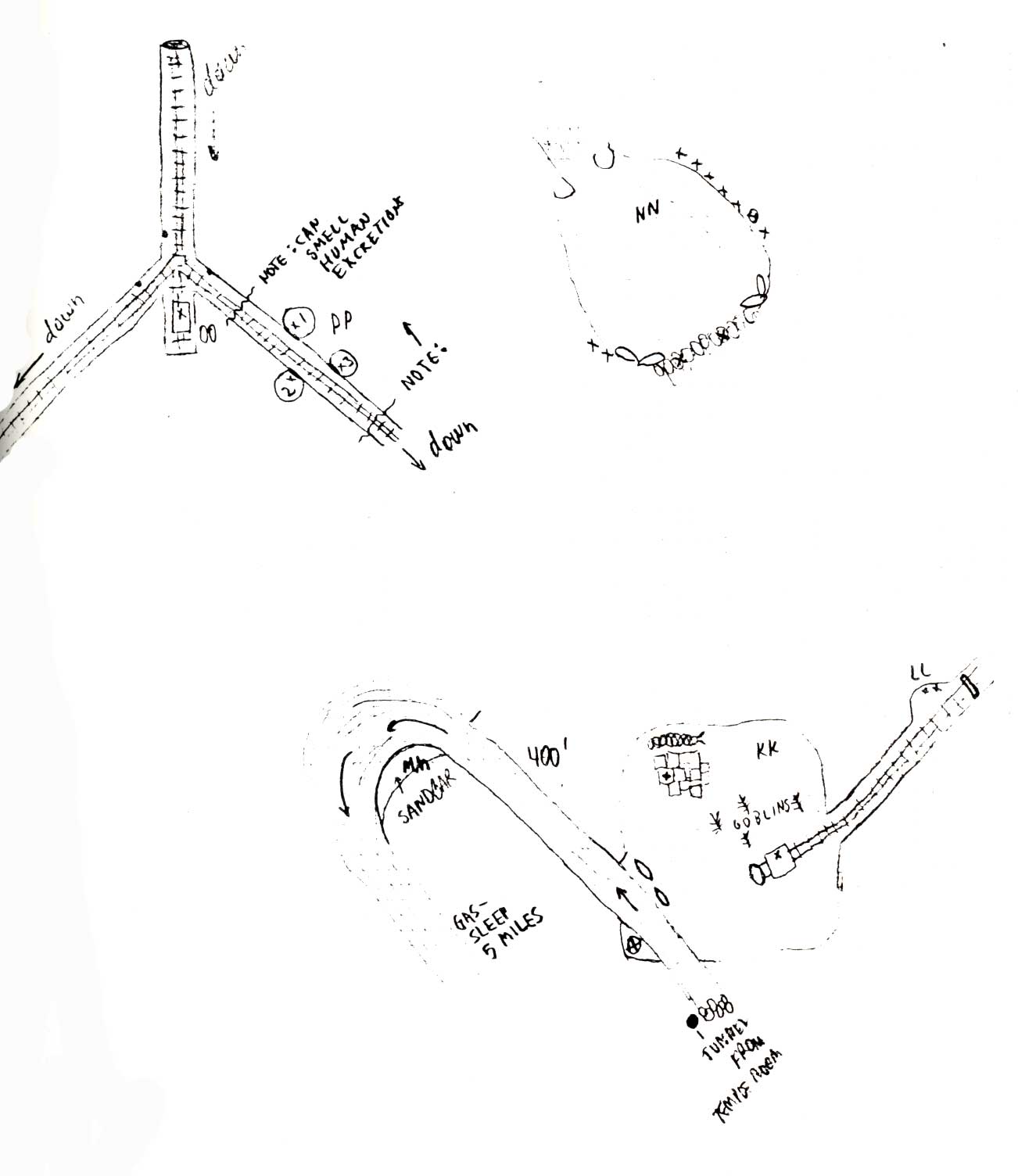 Tomb of the Zombie Lord - Level 2 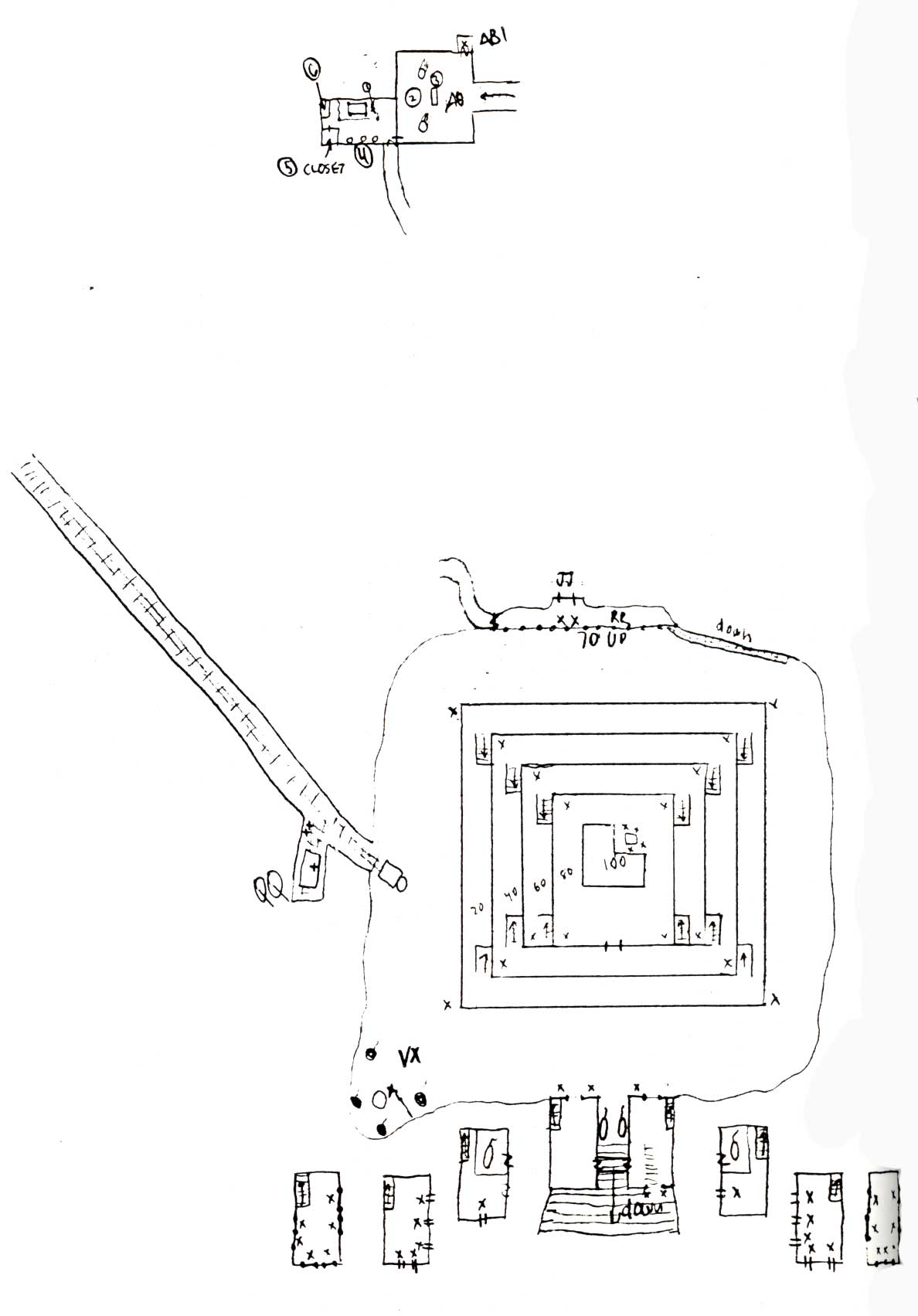 Tomb of the Zombie Lord - Level 3 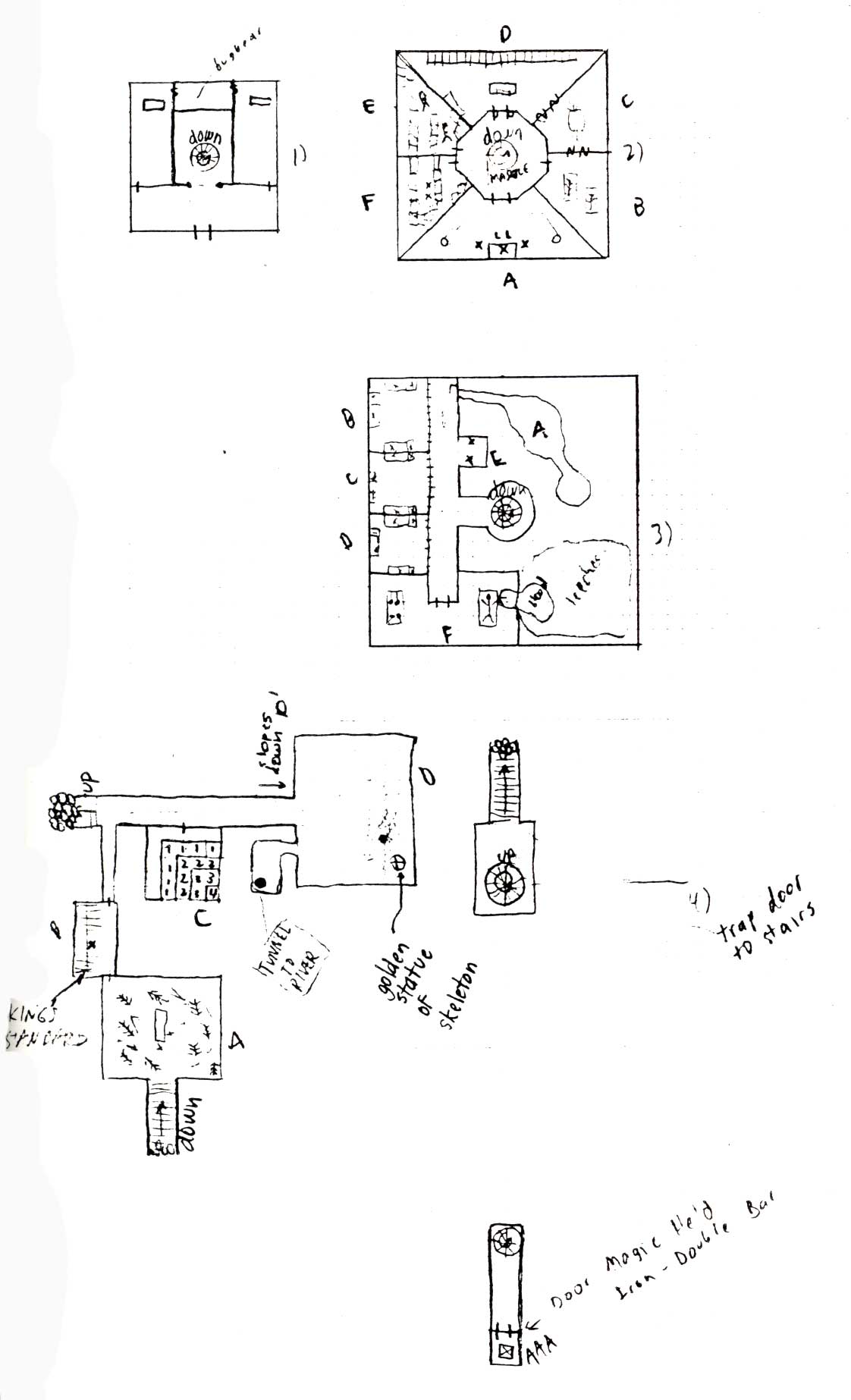 Tomb of the Zombie Lord - Levels 4 and 5

The party crept up a sloping path towards the three caves that nature had formed in the side of the cliff. It was at the back of these caves that the miners had supposedly begun their shaft. A rough map drawn by one of the adventurers and stained with sweat shows the paths available to the party.

As the party slowly moved up the steep slope towards the caves in the cliffs far above. Before reaching their goal, The party had to fight off some gargoyles who had spotted them from their lair far above. Finding that orcs had taken refuge in the outer caves, The party quickly dispatched them. It was then that they stumbled upon a sealed tomb and a large crab that had slept undisturbed for years. Telling the party of the legend of the crypt and the Sword of the Zombie Lord, the crab returned to sleep. After encountering (and killing) some wandering thieves bent on finding the sword, Lord Treadway, Sir Zachary, and the rest of the party passed through the Arch of the Zombie Lord into a large cathedral. The cathedral had been turned into a storeroom for supplies by the evil miners. Hiding behind a pile of crates, the party had to choose between following a mining tunnel or challenging some guards. Picking the path of less resistance, Condor the Cleric and Count de Monet snatched a mining car and off the party went. Down and around and around and down ... the party went to the goblin cave and a great underground river. There, a few mishaps persuaded the party that perhaps they had chosen the wrong path. Ikcin Namffoh using his supreme powers of direction chose another mine shaft. It was there that the Priests of the Zombie Lord ambushed the party. This was the first time in the Third Age that Hylax the Barker was forced into face-to-face combat with another spell caster. A combat which would be repeated many times during the Third Age. After some healing by the skillful Father Guido Sarduici, the party finally entered into the Tomb of the Zombie Lord....

As the party entered the temple, little did they realize that five levels below them lay Legion, the Sword of the Zombie Lord... a sword which they would never find. The party journeyed down through the different levels of the temple, fought zombie priests, battled an evil sandman, and even destroyed several bugbear prisoners. But in the end, the odds proved to be too much and the party was forced to turn back. It was a very narrow escape for our heroes. As they were being chased by zombie priests, the party managed to find a secret door and escape out the main temple doors. But the chase did not end there. The priests brought two winged lion statues to life. With only one purpose, the lions followed the party. But the tough swords of Sir Zachary, Lord Treadway, Count de Monet, and Ikcin Namffoh coupled with the clever spell casting of Condor the Cleric, Father Guido Sarduici, and Hylax the Barker, defeated the lions and ended this the first adventure of the Third Age.

The sword would not remain buried in the Tomb of the Zombie Lord for long. Legion was taken on a later adventure by Minion, Thief of Teufeldorf. It is said that he carries the legendary sword to this day.