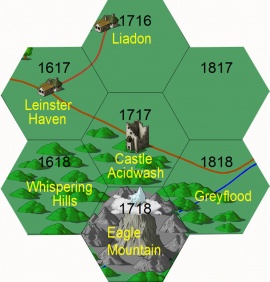 One of a race of very rare sky giants. Little is known of Clouddrifter's origins. In late 828 TA, the sky giant's castle, Thunderhold, riding atop a massive storm cloud appeared in the Western Reaches as it crested over the Shadowyarn Mountains. The rain that fell from the cloud proved to be very acidic, causing ruin to fields, livestock, and buildings underneath. It was determined by the mages of Teufeldorf that the castle would pass directly over the city, causing incalculable damage.

In December 828 TA, King Gregory called upon Blackfoot, U-Gene, Zachary, Zephaniah and Falstaff to stop the advance of the castle. The strike was successful, with Thunderhold crashing harmlessly into the Iron Hills. It is rumored that Zephaniah was killed here, and U-Gene found the legendary axe, Darkin. While Thunderhold passed mostly over unpopulated wilderness, the Castle of Zachary, Knight of Virtue, was destroyed in its path. 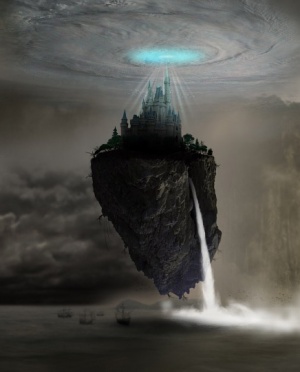 The party was sent by King Gregory the Even-Handed to halt the advance of the Sky Giant, Clouddrifter and his floating castle, Thunderhold. The sky giant's castle, which rode atop a cloud, laid waste to everything it passed over due to an acidic spray that it excreted. Clouddrifter was headed for the City of Teufeldorf, and it appeared that he would pass over the unfinished castle of the newly knighted Sir Zachary as well.

Equipped with Rings of Flying lent by the King, The Party set off for Thunderhold. When they arrived they were immediately attacked by cloud demons. The foes were defeated, but the party was so sorely weakened that they elected to return to Teufeldorf for rest and healing. Afterwards, the party returned for the second time to Thunderhold, but the deadly cloud had passed over the beginnings of Zach's castle.

The party entered the flying fortress and immediately found an old man who claimed to be a prisoner. The old man sent them into the Maze of Doom where the party fought numerous monsters, including a miniature chimera. The heroes finally emerged into a huge audience hall. A giant was seated at a throne on one end, and the party assumed that they had found the sky giant. The giant sent his ogre guards to attack the party. It was later learned that the figure on the throne was a cloud giant in the service of Clouddrifter.

Not all the ogres could be slain (although the other sky giant was killed), and the party was forced to beat a hasty retreat and barricade the door. However, they were able to proceed through the castle on this route, and they eventually entered the chambers of Clouddrifter. A caged banshee wailed an alarm which caused Zephaniah's death. Falstaff, acting quickly, cast a wall of ice around the cage, sealing in the dreaded shriek.

Clouddrifter and his mage appeared at the top of a staircase, and the battle began in earnest. After a great deal of hacking by U-Gene, Zachary, and Blackfoot, the giant was hewn down to size. The mage escaped in to a small magical hut and bargained for his life. The party agreed to let the spellcaster live, but they claimed great treasure. It was here that Falstaff claimed the Amulet of Clouddrifter, and U-Gene found the legendary axe, Darkin.

The party promised the Mage that they would leave the castle, but the heroes did not depart until ensuring that the deadly fortress would fall from the sky and crash. Once again, the party returned triumphant to Teufeldorf.