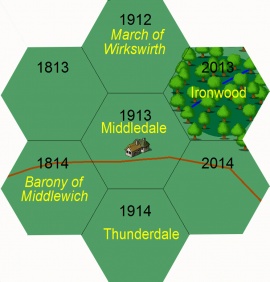 Formed as the part of the Middle Reaches expansion in 621 TA (see the Baronies of the Middle Reaches), Middlewich has always been the poorest of the three. While the soil is rich for planting corn, wheat and other grains, the harsh winters and high winds make farming difficult in the region.

The current Baron of Middlewich, Hugo is an elderly man but still rules with an iron fist. His nine children effectively run the Barony in different capacities, although the old Baron is still active.

In 653 TA, the cousin of the Baron of Middlewich was made Lord March of Wirksworth with responsibility of protecting the northern border of the Middle Reaches from an increasing orcish threat. Close ties between these two baronies existed with frequent marriages between the sons and daughters of the noble families for over two hundred years.

In 868 TA, the suspicious poisoning of the Lord March of Wirkswirth's wife, Jillian Moonstoke, at a party in Middledale created a permanent schism between the noble houses. After fifty years, Hugo, current Baron of Middlewich proclaims innocence in the matter, but Richard Moonstoke, current Lord March of Wirkswirth still holds him responsible. The conflict is now commonly called, the Old Men's Feud.

The forest of Ironwood has long been shunned by the peoples of the Barony of Middlewich. Little game can be found there, and there are no known occupants of the deep woods. It is rumored that a large dead tree sits at the center of the forest surrounded by a poisonous bog and carnivorous frogs.