Defense of the Gold Caravan at the Three Peaks 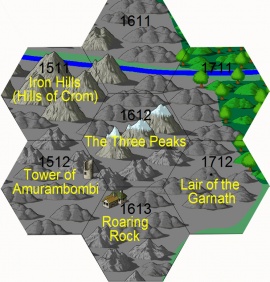 The party set out on an expedition to the Three Peaks at the far end of the Iron Hills, south of the River White. There, The party was to guard a passing gold caravan from an anticipated ambush by the demons. However, as they journeyed through the Iron Hills, their loyalty to King Gregory was tested by their guide, Harmon of Teufeldorf. The nature of the test remains a secret, but it is known that the party proved their loyalty and proceeded with Harmon to fulfill their mission (encountering only a few hill giants and some nickelpedes).

An ambush was indeed sprung, and the heroes arrived just in time to foil the plot. Soulpiercer the Giant Raver tried to hide the caravan by teleporting it to a nearby cave, but Ickin Namffoh climbed aboard at the last minute and was transported with it, foiling the plot. Meanwhile, the rest of the party engaged the cave wights, barrow wights, and ur-viles that served the Giant Raver. Lord Treadway, Sir Zachary, and Condor fought with courage and honor. Father Guido battled from within in his demon circle, while Count Demoney III employed his stealthy backstab. Finally, Hylax created an illusory rift in the ground beneath Soulpiercer which fooled the Giant Raver and sent him falling to his death. The party and the caravan returned triumphant to Teufeldorf.

However, it was obvious that a second covenant had been found and opened by the demons. It seems as if Teufeldorf was to face many more challenges by the giant ravers and their minions.