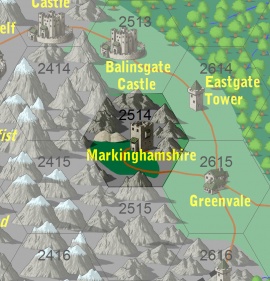 Markinghamshire valley is a very fertile grassland. Most of the population lives in Markinghamshire Castle and the adjacent village southwest of the castle. The cattle and horses roam the open valley under the watchful eyes of the Riders of the Mark.

Markinghamshire is the oldest inhabited human settlement in the Eastern Reaches pre-dating the Hamlet of Haggelthorn by over four hundred years. Officially granted Dutchy status in 352 TA at the conclusion of the First Orcish War, historians date the founding of Markinghamshire at 243 TA when the area was settled and the castle was built by the first High Mark.

The High Mark Duke William is the hereditary ruler of Markinghamshire. His bloodline claim to the throne traces its origins back the origins of the kingdom in the mid-third century TA. The High Mark has two children: Lady Genevieve du Marking, an enchantress and her brother Lord Rupert du Marking, a hero.

The men and women of Markinghamshire hold honor and integrity as integral values and are highly respected outside the Mark. The Riders do not have permanent settlements, but rather they follow their herds and live on the prairie. While a proud and very closed community, the people of the Mark are friendly to strangers - although strangers are not allowed to ride into the valley unescorted.

Built on a rocky mountain several thousand feet above the plains, Markinghamshire Castle overlooks both the Duchy to the west and the expanse of Haggelthorn Forest to the east. Remarkably however, the castle can only be approached from the west. Thus, any invaders are seen almost a day before they can get to the castle.

Despite its geographical remoteness and the protection of the recently-built Balinsgate Castle and Eastgate Tower, Markinghamshire Castle was sacked in July 905 TA during the Invasion of the Tang Empire while its standing army was away in service to the King. Control of the castle was returned to the Duke after lengthy negotiations with the Tang Emperor.

Invasion of the Zealots

In 245 TA, shortly after Markinghamshire Castle was completed, several thousand warriors and priests from Sandal set out on a religious quest. They traveled north for almost a year across the Sands of Time looking for a promised land. Many died before they discovered the vast grasslands on the southern edge of the Reaches. The remaining zealots, however, were tough seasoned fighters led by a massive giant named Ryan.

As they continued north, it was by accident that Ryan and his men came upon the Valley of Markinghamshire on a hot summer day, a summer day during which a rare solar eclipse blackened the sky. Taking this as a sign from their gods, the zealots attacked the newly-built castle.

The Invasion of the Zealots lasted only four short days. The warriors and priests were slaughtered. The survivors fled south, and the bones and relics of their dead were buried somewhere in the Shadowyarn Mountains.