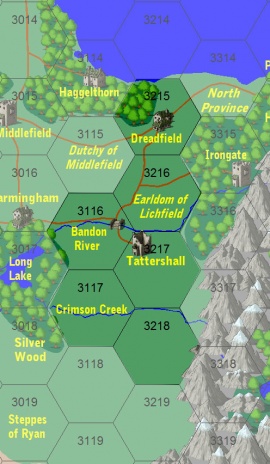 With its capital at Dreadfield, the Earldom of Lichfield runs approximately 240 miles south from the Inner Sea along the edge of the Wolfshaunt Mountains reaching 120 miles east to west at its widest point.

The current ruler is Jamie Redmond, Third Earl of Lichfield. Jamie is the eldest child of William Redmond, Second Earl of Lichfield who sired twelve children before his death in 886 TA. In contrast to his father's iron-fisted rule, Jamie is more interested in commerce and adventure. The Earl has sponsored several expeditions to the ruins of Tattershall, and he openly encourages free trade with neighboring kingdoms. In the past few years, these expeditions have brought wealth and adventurers into the area.

Rumor holds that Jamie permits free travel to the strange folk of the Wolfshaunt. His younger sister, Emma, has been accused of being a vampire due to her alabaster skin and fear of sunshine, although the official position from the Earl is that she suffers from a blood disorder.

Dreadfield was established as a trading post southeast of Haggelthorn Forest during the early 8th century TA.

As it flourished, a local warlord, Deron Baneberry, built a small keep on the bluff above the village called the Red Keep which had sprung up around the trading center, extracting taxes from the trade and occasionally raiding caravans. This petty noble soon became quite rich and powerful and assumed the title of the "Robber King". As Lichfield and the Robber King grew in power, Baneberry sought to consolidate his power by marrying his son and heir, Ganz Baneberry, to the daughter of a North Province noble, a sorceress of no small repute.

Their descendants ruled a growing domain which climaxed under the rule of Draigh Baneberry, the Robber King's grandson. It was Draigh who built the sprawling Tattershall (now a ruin) and poured funds into the city of Dreadfield in order to make it into the Gem of the Reaches. His reign was bizarre in many other ways, and it came as no surprise when it was reported that Draigh had mysteriously vanished after some years of rule when no change in aging could be detected. The castle was abandoned, supposedly due to a terrible curse upon the place, but Dreadfield continued to flourish.

In 825 TA, Dreadfield was proclaimed a free and independent city. In 830 TA, the area was formally granted the Earldom of Lichfield from the Crown.

Over the intervening decades, a decline in trade seemed to turn the place into a backwater, save for recent events.

Several years ago a series of treasure troves were discovered in or near Tattershall. Immense wealth began flowing into the town, and artisans and mercenaries began flocking to Dreadfield due to this boom. Earl Jamie used this influx of gold to revitalize the city, and it again rules a considerable portion of the area.

The Bandon River comes down from the Wolfshaunt Mountains running west through the fertile plains and farmlands of the Eastern Reaches. A number of villages and towns line the river which eventually empties into the Long Lake. The river is known for its deep, swift current and abundant fish.

This river bubbles out of the high valleys of the Wolfshaunt Mountains crossing the plains as the southern edge of Lichfield before ending its journey at Long Lake. The Crimson Creek is the lifeblood of the southern Eastern Reaches, and is settled with a large number of farms and homesteads. The creek's name comes from a strange phenomenon that happens late each Fall when the normally crystal clear waters turn a dark crimson for several days. The locals say that the creek is filled with the blood of the harvest sacrifices of the Counts that live high in the Wolfshaunts, however officials are quick to rebuke this theory. They contend that the falling of the red leaves of a certain type of high mountain aspen into the waters cause the discoloration. Neither theory has been proven.