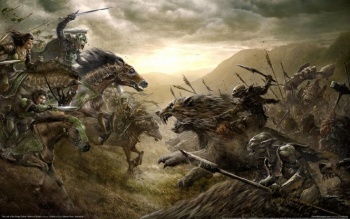 By the mid-fourth century, the orcs had driven almost every living soul in the Western Reaches into the City-State of Teufeldorf. The orcs had long been thwarted in their attempts to take over Teufeldorf whose castle stood on an easily-defensible island. The area was well protected by the very wide and swift flowing River White which ran along its entire northern border. Off the main island, the outlying villages and farms, however, were often the target of orcs raids which continued to escalate throughout this period.

The River White was weakest east of Iron Hills at the location of the present day Rivershaw Castle. There, a large army could cross the river in relative isolation with no need for bridge construction. It is there that the orcs struck in 344 TA, crossing the River White with an overwhelming army comprised of warriors from all the orcish warbands. This date is traditionally held as the beginning of the Orc Nation - representing the first large-scale cooperation of the orc leaders in the northern Reaches.

As they approached Teufeldorf, half of the orc army swept into the Teufelwald to provide a southern flank of the attack on the area. Those that entered the forest were never seen again. Rumors suggest that the tree ents took a dim view of the orcs' plans and ended their campaign almost as soon as the army entered the forest. The second army of about four thousand orcs swept north of the forest, driving the peasantry ahead of them, and eventually set up a long-term siege Teufeldorf Castle. The First Orcish War had begun.

Teufeldorf survived because of the lack of an orcish navy. Ships were sent to recruit any who would fight the orcs. These ships also brought supplies and much-needed food for the castle's inhabitants. It is rumored that the elves provided several company of elite archers, but the bulk of the Teufeldorf forces came from the disenfranchised - pirates, prisoners, exiles and others seeking to exchange their swords and bows for a free home in Teufeldorf. All that was needed was to defeat the orcs.

In August 352 TA, an attack was launched to coincide with the arrival of a large army of horsemen from Markinghamshire who had ridden from the Eastern Reaches recruiting sellswords along the way. The first attack wave left Teufeldorf Castle at dawn from the west just as the Markinghamshire forces hit from the east. The orc siege was quickly broken by late afternoon. Buoyed by their success, the orcs were pursued and slain along the shores of the River White. Within days, it is said that the river ran red with orc blood, and it is doubtful that more than a handful of orcs survived the massacre. The First Orcish War was over.

Markinghamshire was granted status as a Duchy, although its leaders and castle remained independent - having been established in the Eastern Reaches for over a century. In addition, two defensive castles were built: Rivershaw Castle on a strategic island where the orcs had crossed the River White and the Coral Castle near where the River White enters the Inner Sea. These were established to prevent further invasions by the orcs from the north.