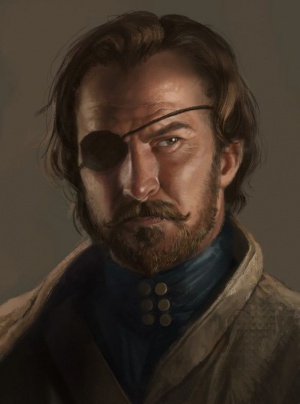 Flynn, Baron of Southwark, is a young man in his early thirties with brown hair, a dashing countenance, and an eyepatch. He is of average height and has the tanned weatherworn look of a sailor. The fifth baron of the line, Flynn is the great-grandson of Silver and Eva Southwark, who founded the barony in the early ninth century TA.

Flynn spent his youth on the docks of Harrowport where he was born in 886 TA. Following in the tradition of his ancestors, Flynn spent as much time at sea as on the land. An able student, Flynn displayed a quick mind, a decisive nature and a easy-going humor that has made him popular with the people of Harrowport.

Flynn is fascinated by the tales of the gypsies and actively seeks to have gypsy ships dock at Harrowport whenever possible. The gypsy circus from The Gilded Lady travels from Harrowport to Freeport each year - starting its journey to sold-out crowds in Southwark. Bavol Scamp, the captain of the ship, is always a guest at the old governor's mansion which now acts as the Southwark's residence in port.

There is no Southwark domicile in Teufeldorf, although Flynn has sailed there on occasion. Unsubstantiated rumors hold that the original Southwark lands within the Royal Quarter of the city-state were lost in a gambling wager to Captain Obed Marsh by Flynn's grandfather.

Flynn is the only Western Reaches noble to have active diplomatic relationship with the merfolk. The barrier reefs off the port are home to a large community of merfolk who previously raided ships docking at Harrowport - giving the towns its ominous name. Now, the merfolk act as a protectorate for the port - keeping it free from military incursions and pirate raids. It is unclear what Flynn provides to the merfolk in exchange.

Flynn is unmarried, although he is considered the town's most eligible bachelor. Rumor holds that he is secretly married to a mermaid princess, although this is wild speculation at best.