Difference between revisions of "Founding of Teufeldorf" 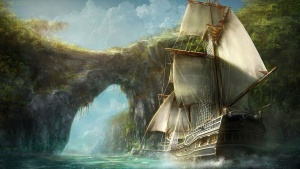 According to a First Age logbook of the sailing ship Luckstar, the captain, her crew, and a small number of passengers fled the port city of White Cliff in the Old Kingdom of Rembia in early 1212 FA. The log reports that the captain refused to give his ship into the service of the Overlord, and instead made a late-night departure under heavy fog with other exiles who shared the captain's desire for freedom from "political tyranny".

Instead of following the coast, the ship headed due east following the East Star, commonly known as the Luck Star, landing on the grassy plains of the Western Reaches on the southern side of mouth of the River White. According to the log, the crew encountered a small tribe of fierce natives living on an easily-defended island just west of their camp. Explorations onto the island discovered a native village dedicated to a local devil. The island soon became known as the Devil's Village.

After several brutal clashes with the natives, the captain led an attack on the Devil's Village. Using their superior weapons and armor, the crew quickly killed the natives, burning the village, and burying any traces of the purported devil worship. On the island, the crew built a village which would quickly grow into a town and then a city. As a jab at their former master, some of the locals called the place the City-State of the Invincible Overlord - as an Invincible Overlord certainly outranks an ordinary Overlord. However, the name Teufeldorf - first coined by dwarven traders who brought stone down river for the construction of the castle - was quickly adopted as animosity towards Rembia faded with time.