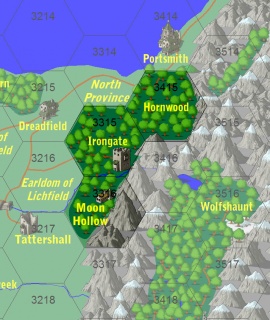 The Free City of Irongate is built around the base of a long-dilapidated Second Age castle. The origins of Irongate Castle are undoubtedly of giantish nature as the doorways, hallways and rooms are all of enormous proportion. It is rumored that the city was once the capital of a great giant kingdom, although no written trace of such exists. The current city is home to a most unsavory collection of thieves, brigands and vagabonds. Irongate also boasts the largest population of ogres, trolls and giants in the Eastern Reaches. Irongate merchants trade in weapons, armor and black magic items.

The city is run by the self-proclaimed Marquis of Irongate, a human wizard of the nastiest disposition. Mindar the Mad rarely leaves the high towers in the ruins of Irongate Castle. During the occupation of the Eastern Reaches in Hastur's Dominion, it is rumored that Mindar was given powerful artifacts of evil and chaos by Harek. In return, the Irongate monarch continuously bred discontent and chaos in the surrounding courts with an almost constant barrage of false intelligence and innuendo.

Recently, travelers returning from Irongate report large bands of roving wolves in the darkened forests of the Hornwood. Rumor holds that Mindar is currently in discussions with a family of night-travelers that have taken residence in the old castle.

The Hornwood is a fair-sized woodland. In the past it was the Earl of Lichfield's favorite hunting place despite the ferocious creatures often found there. The area is named for the hornwood tree whose straightest limbs were once specially treated and seasoned to make the finest of elven bows. Hornwood is exceptionally tough and resilient, but first grade wood is not common and is hard to prepare for use in bows.

In 903 TA, the Hornwood began transforming. According to local rumors, Then, the woods began to take on a sinister aspect. Woodsmen complained of nightmares and dream-induced sleep-walking. Often driven to the point of madness, they talked about “the mist” a dark thick smoke that was rumored to move through the trees and of the “white men” – ghostly apparitions that came unbidden at night. Even the elves that lived in the Hornwood became sick – listless and unresponsive. The hornwood trees twisted – their wood no longer prized for bowmaking. Eventually, the Hornwood was abandoned by the woodsmen and elves. Even the merchants of Irongate refused to enter into its overgrown depths. Today, the Hornwood stands in perpetual darkness – its canopy dense and its ground shrouded in twilight.

Deep in the Hornwood, a small village – only a hamlet – rests against the Wolfshaunt Mountains. Moon Hollow is an eerie place, even during the best of times. The men and women of the hamlet shun contact with the outside world – and only the bravest or most foolhardy of merchant attempts to ply his trade in the dark village. A strange stone chapel – referred to by the locals as the Chapel of Udolf – built out of green granite stands in the center of the village. There is no mention of who Udolf is. Nothing has been heard from the residents of Moon Hollow since 895 TA.

An expedition to the Wolfshaunt explored Moon Hollow in 902 TA.