With the destruction of the Shadowland Empire, the Reaches came under the rule of the three sons of Hastur. The Reaches had, until this time, been considered a single nation. With the arrival of Hastur's sons, the Reaches were split into three distinct kingdoms: the Western Reaches with a capital at Teufeldorf, the Shadowyarn Mountains (now Durinshold) with a capital at Paddington (now Dwarrowdelf), and the Eastern Reaches with its capital at Dragonsford. Collectively, these were called Hastur's Dominion - a designation which lasted until the defeat of the three sons during the Hastur Rebellions of 883-885 TA. 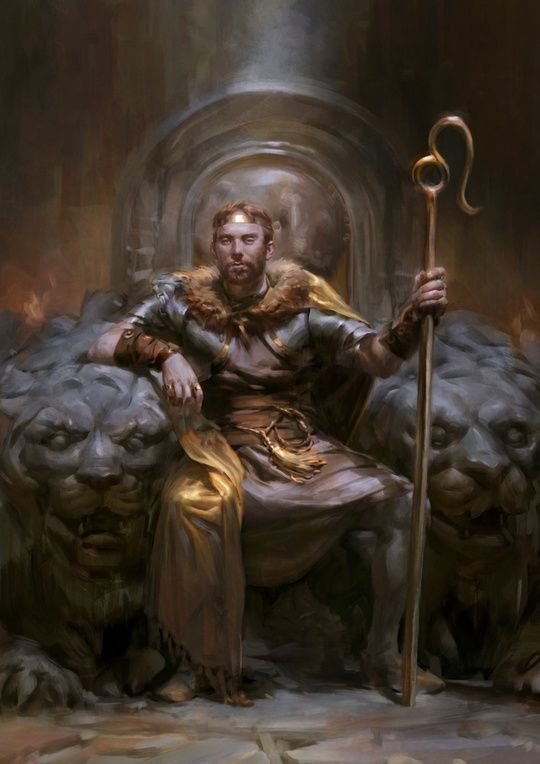 There are many theories about the arrival of the three sons of Hastur into the Reaches. Some believe that the Elder God was awoken from his slumber by the evil and chaos in the hearts of men. Others blame the dwarves and their constant tunneling into Hastur's realm of stone and earth. The Collegium Magicium purport that Hastur was released from a prison that held all the Elder Gods, save Oakentree. They speak of a dark moon that fell from the sky in a cataclysmic event.

What is known, is that three sons - of human form but clearly not human - arrived at the gates of Teufeldorf, Paddington, and Dragonsford. They quickly toppled the leaders of each, subduing the armies, and enslaving the population. Hastur's Dominion was a dark time for the Reaches.

In the Eastern Reaches, Harek Bloodaxe, known by some as the Red Rider, sowed the seeds of treachery and deceit among the baronies and dutchies, keeping them constantly at war with each other. In this way, none could challenge his authority. These minor kingdoms paid monthly tributes in the form of gold, gems, jewelry, magic, and slaves. The fate for defying even the smallest of Harek's wishes was death, instant and irrevocable.

Dragonsford Castle was the capital of Harek's domain and many changes were made to the structure in order to accommodate Bloodaxe's strange tastes. The castle was guarded by white dragons who were given roost in the old wizard's tower. A human "king", little more than a puppet, engaged the citizenry on Harek's behalf.

The last puppet ruler of Dragonsford was King Trafford who was slain by Ernest Goodfellow in 884 TA during the Hastur Rebellions.

In the Shadowyarn Mountains, Atli the White took up residence in the castle of the Lord Mayor of Paddington. He renamed the structure the Shadowkeep, and quickly transformed it into a proper military compound. Unlike Harek and Grim, Atli ruled the Shadowkeep directly.

With a large dwarven population which seemed unwilling to bow to his will, Atli subjugated a large population of humans as his personal religious zealots. Called the White Cloaks, they were instrumental in driving the dwarves from the city and keeping absolute control over the remaining population.

Atli's field army was led by General Kendall Praetor who was defeated in several battles by the dwarves eventually leading to the successful siege of the Shadowkeep by the dwarven General Dugald Axeworthy in 883 TA. At the end of the Hastur Rebellions, Atli was slain by the present-day dwarven King U-Gene.

In the west, Grim took up residence in Teufeldorf Castle, transforming the entire island into a religious temple shrouded in a magical barrier of inky blackness. While Grim rarely ventured into the city, his undead minions kept the city in a state of perpetual terror.

By 840 TA, commerce with Teufeldorf had significantly declined with only a few slave traders regularly calling at the port. A mass exodus in 841-842 TA was quelled by the city gates being closed to travel except with permission from the Council of Stones, the ruling human faction in Teufeldorf.

In 885 TA, the arrival of the dearg-due, a vampiric race of unknown origins, supplemented Grim's power and heightened the terror in the local inhabitants.

Outside of the city and its immediate surroundings, Grim's rule was significantly less invasive. The small baronies and duchies suffered under heavy taxes, and Grim's soldiers would often raid towns for human slaves. However, day-to-day life remained fairly normal. In the far south, the Southern Barons formed the strongest resistance to Grim and his undead hoards during the Hastur Rebellions.

Legend: Return of the Elder Gods

The most well-known prophesy predicting the return of the Elder Gods was written several years before the event by an unknown oracle in Teufeldorf: