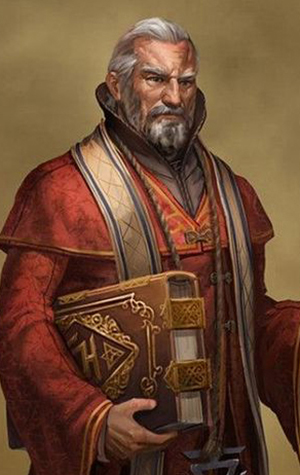 Fuzzwort is a Master Librarian for the Great Library at Sarth. While maintaining his close ties to the academic institution, he excels as both an adventurer - collecting unique books for study - and as a strategist. He is currently the Reaches Ambassador to the Old Kingdom stationed at the consulate in White Cliff. Rumors hold that his current position allows him access to clandestinely study the Overlord and his followers.

While nothing is known of his parentage, it is clear that Fuzzwort was first associated with the Great Library stacks at an early age. Born on January 8, 811 TA, early library records show a child named Fuzzwort accessing books in 816 TA - at the age of 5. It is unclear whether Fuzzwort attended the traditional schools of the library staff, but his first apprenticeship in the research branch started in 823 TA - at the age of 12. At the age of 18, Fuzzwort was granted research leave to study at the Library of Sarth in Teufeldorf. Arriving on the docks of the city in August 829 TA, Fuzzwort was captivated by the life outside cloistered walls.

April 831 TA was Fuzzwort's first recorded adventure for the Crown - a journey south to Sandal to match wits with the Brotherhood of the Seven. This adventure also established a long-held fellowship with his current traveling companions. In addition to the battles against the Shadowland Empire, Fuzzwort undertook a number of missions for the Crown including the fifty-year adventure to the Netherworld and extensive adventures in the Shadowkeep. He helped establish the monarchy of the Three Kings. Fuzzwort was briefly assigned as the Librarian of the Forgotten Library in Sandal during the Wolfshaunt Campaign before taking up his current assignment in the Old Kingdom.

Fuzzwort carries three legendary artifacts - the Librarian's Cloak, the Literary Hammer and a carved Runestaff. These items, along with his extensive adventuring experience, make Fuzzwort the preeminent warrior-priest of Sarth. Fuzzwort appears to be in his late 40's despite his great age. He is unmarried and can constantly be found with his nose in a book.