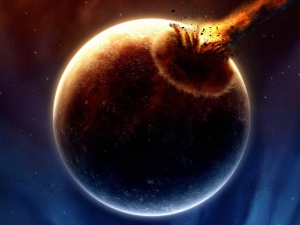 The year 1204 SA began without fanfare. The ratfolk of the Tang Empire continued to dominate the shipping lanes despite increased activities from pirates and buccaneers. The Eastern Reaches continued to push settlements eastward towards the Wolfshaunt. Rembia continued to struggle under the weight of the monarchy. Many of the outlying kingdoms and provinces, suffering under draconian taxes, showed the earmarks of rebellion. The line of the Overlords suffered from inbreeding, madness and an increasing reliance on drugs distilled from the lotus flower. In other words, life in the Realm was normal.

The lone voices of a few astrologers and mystics foretold a great disaster, but the monarchy took no heed. There were always those proclaiming the end of the world.

In late November 1204 SA, a great ball of light from the heavens, known as Heaven's Fire, struck somewhere in the uninhabited wilds of the Realm. The tremors from this catastrophic collision could be felt throughout the Realm. Within weeks, the sky grew dark. Winter remained over the Realm for eighty years - it was called the Long Night.

During the Long Night, strange creatures ventured into the Realm that otherwise would have remained cloaked in the dark woods and deep caves. People fled from the cities into the forests and hills. Towns were fortified, and the joys of life were abandoned for defense. Life focused on daily existence. Some fared better than others, but starvation was common.

Storytelling focused on the dark tales of lost morality. Even in the years after the Long Night, philosophers and wizards sought answers to the mystery of Heaven's Fire. The former blamed the sins of mankind. The latter focused on the orbits of planets and mysteries of other planes. No answers were ever found.

With the coming of Heaven's Fire, the Second Age ended. The year following 1204 SA became the first year of the Third Age.