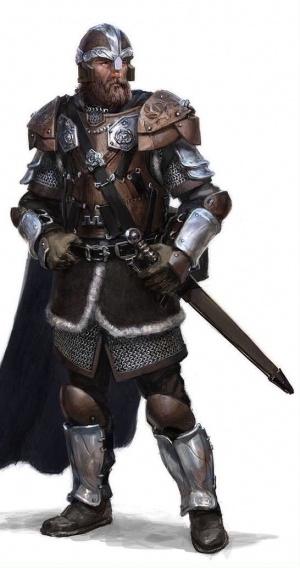 Humans are the most common inhabitants in the Realm.

Humans are typically between five and six feet in height - although great variations have been reported in both height and weight. Humans possess a wide variety of skin colors, body types, and facial features. Generally speaking, humans' skin color assumes a darker hue the closer to the equator they live. Humans possess exceptional drive and a great capacity to endure and expand. Their kingdoms and nations are vast and sprawling - built with the strength of their sword arms and the power of their spells. Humanity is best characterized by its tumultuousness and diversity, and human cultures run the gamut from humble, honorable villages to decadent noble families in the most cosmopolitan cities of the Old Kingdom. Human curiosity and ambition often triumph over their predilection for a sedentary lifestyle, and many leave their homes to explore the innumerable forgotten corners of the world or lead mighty armies to conquer their neighbors, simply because they can. Ambition alone drives countless humans, and for many, adventuring serves as a means to an end, whether it be wealth, acclaim, social status, or arcane knowledge. A few pursue adventuring careers simply for the thrill of danger.

Humans hail from myriad regions and backgrounds - lacking other races' ties to tradition and eager to turn to anyone offering them glory or protection. Most peasants and townsfolk belong to the Church of the Hearth, while more specialized organizations exist for soldiers, merchants, healers, etc.

The Origin of Humanity

It is the subject of some debate as to the origins of the human races of the Realm. Certainly, there is extensive evidence of human occupation scattered around the Realm prior to the advent of writing and organized villages. Crude, ancient drawings of deer, boar, and other wildlife have been found in the caves of the Old Kingdom. The humans depicted in these drawings are large, fair-skinned, dressed in skins, seemingly unrelated to the dark-haired, olive-completed inhabitants today. Ruins uncovered by sandstorms and looted by treasure hunters in the Sands of Time tell tales of a human race long-ago forgotten. And what of the strange ziggurats isolated and abandoned along the southern coast of the Western Reaches, their inhabitants vanished like ghosts. Indeed, there seems to be no clear path to trace the human evolution that occurred millenia ago.

According to Reliza's History of Humankind, Volume One, the earliest vestiges of humankind can be traced to the fertile river valleys of the Old Kingdom. In this tropical paradise, early humans flourished as primitive hunters. As they multiplied, they followed large herds of plains game pushing into the forests of the Evenwild - spreading both north and south along the coasts of the Great Sea. Early in the First Age, the first settlements were founded as nomadic tribal wanderings gave way to rudimentary agriculture. It is said that Reliza used a magical item - a pipe - to advance his knowledge further back into time. A rumor holds that Reliza, upon discovering the "event" at the beginning of mankind, wrote a treatise that he felt was too dangerous for his peers. The document was sealed in the Library at Sarth shortly before Reliza's death.

The most well-respected scholar of early humans is the arch-mage Reliza, who studied both in the field and in the dusty libraries of Sarth in the early days of the Third Age. Reliza is reported to have developed a magical device that would allow him to communicate with humans from the early dawn of time. The Pipe of Reliza, when smoked with a mixture of a strong narcotic weed and ground bones from ancient peoples would put the user into dreamworld, called the Glimmer, by Reliza and his followers. In the Glimmer, Reliza would be able to question the spirits of the long-dead gaining information about their lives and habits. Reliza devoted his life to the pursuit of this knowledge, and he gained fame and a small following.

It was his celebrity status that is rumored to have cost Reliza his life. One day in a dream-like stupor, Reliza was killed by a petty baron from Sandal who wished to speak with his long-dead father. The whereabouts of the Pipe of Reliza disappeared into the southern kingdom of Sandal, and it remains a lost relic to this day. Rumors have placed the pipe at various locations around the Realm, but no substantiated proof has ever been found.

What has remained of Reliza's studies are a number of large tomes entitled the History of Humankind. These tomes remain in the libraries of Sarth. And, although they are dismissed as the fantasies of a drug-crazed madman by some, they remain the most complete, detailed, and accurate works of the age.