Land of Bogs and the Little People 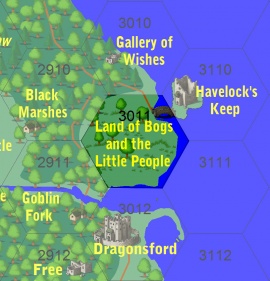 The Land of Bogs and the Little People denotes the small area of marshy land which juts into the Inner Sea just north of River White. A low lying crescent of hills and the forest's edge defines the western and northern borders of the gnome kingdom. The other boundaries are made by the sea. The bogs are formed by the numerous small tributaries that run through the area, and the moors are filled with low hills burrowed with gnome dwellings.

If few travelers have ventured into Haggelthorn Forest, fewer yet have braved the Land of Bogs and the Little People. The Little People are, of course, the gnomes which have populated the area since the beginning of the Third Age. Strange tales of swamp creatures as big as houses, eerie lights and sounds, and an occasional escaped prisoner keep the nearby inhabitants out of the moors at night. While these tales might be rumors, the bogs are home to swarms of biting insects during the summer months leading to the area's nickname, Gnatmarsh.

On occasion, wee travelers make their way from the bogs to Dragonsford to trade or buy merchandise. These small adventurers almost always travel in fives (the reason is not known). Woe to the adventurer who goes uninvited into the Land of Bogs and the Little People.

There is a small path winding north of the Land of Bogs and the Little People. The path follows a dry creekbed through open meadows for about a mile until the dark trees of the forest begin to loom over the path. At the end of the path, near the shores of the Inner Sea, is the manor house of the feudal lord, Strudwick the Mad, built around 860 TA. It is called the Gallery of Wishes, as Strudwick was a fanatic about collecting artifacts and displayed them at the manor house. It is rumored that an adventuring party sacked the manor in 883 TA at the behest of Captain Horatio Bilgewater who had been sold into slavery as a child by Strudwick.

The legend of the Havelock's Keep is well known. It seems that around 830 TA ago, a pirate by the name of Janvel Swayne, amassed a great fortune by raiding the traders of the Inner Sea. He took his spoils and built a small keep on an island off the Land of Bogs and the Little People. The island fortress was small and boasted a natural harbor in which he kept his sloop, the Winged Vulture. It was as Janvel was approaching his latter years that he joined forces with a wizard named Havelock. Havelock was a thouroughly evil necromancer, and soon he had Janvel under his command. Shortly thereafter, Janvel's raiding took a more sinister guise, as human slaves were taken and mass executions became common. It was on one of these grisly raids that the Winged Vulture took a direct hit from a catapult. The ship managed to limp to within a half mile of the keep before it sank beneath the chilled waters of the Inner Sea. It is said that Janvel and most of his men drowned, but Havelock made it to shore. However, the exertion of the task laid Havelock in bed for almost a month, at death's door. Since then, there has been little heard from Havelock's Keep except strange rumors of mishappen creatures running along the castle walls when merchant ships pass by the now crumbling structure. An adventuring party explored Havelock's Keep in 883 TA at the behest of Potkin, the town potter of Dragonsford. There, they rescued his daughter, Meri, from the clutches of an evil cabal.

Later in 883 TA, the same adventuring party claimed to have returned to Havelock's Keep, having reached it via a time traveling device - arriving 50 years in the past when the Keep was at it's glory. There, they claimed to have defeated Janvel, burned the Keep and sunk the Winged Vulture - all events that really happened 50 years prior. The ramblings of the adventurers were dismissed by most as a bad dream.

In March 884 TA, a group of salvage gnomes enlisted an adventuring party to rescue the treasure from the Winged Vulture. The success of the mission is somewhat in doubt, although the adventurers boasted at having taken over the salvage submarine. They were last seen taking supplies north, supposedly to restore Havelock's Keep to its former glory.