Liberation of the Village of Roaring Rock 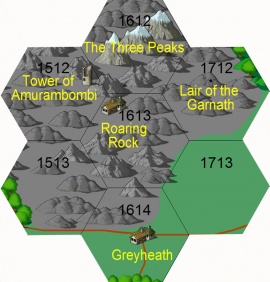 A small village in the Iron Mountains which was occupied in 826-827 TA by the Loremaster Godsbane and his army. In August 827 TA, Roaring Rock was liberated by a small band of demon fighters including Blackfoot, Falstaff, U-Gene, Valentine, Sir Matthew, and Sir Thomas (both Knights of Teufeldorf). Although details of the battle are lacking, rumors hold that victory was claimed by the Elven Stones wielded by Falstaff. Several artifacts of legend have been tied to the Liberation of Roaring Rock: the Staff of Dagda-Mor, Titansfist, and a battle axe forged by Kaladin. Among the fallen, Sir Matthew later was canonized as a saint in Teufeldorf. This was the last battle of the Second Demon War of 821-828 TA before the binding of the demons by Hylax in October 828 TA.

Adventures In The Village Of Roaring Rock

King Gregory the Even-Handed summoned Blackfoot, Falstaff, and U-Gene, and he asked them to travel to the Village of Roaring Rock in the Iron Mountains. There they were to free the town from the evil lore master and his army of cave wights, barrow wights, and ur-viles. With the adventurers, the King sent Valentine the Cleric, wielder of the Staff of Dagda-Mor, and two Knights of Teufeldorf, Sir Matthew and Sir Thomas.

On the journey there, the group encountered an old man sitting under a tree with something that looked like a crystal ball or a large round gem. They sought to take it from him, but the old man commanded su monsters hidden in the tree to attack them. Only Falstaff's new found Elfstones saved the adventurers. A yellow bolt shot out from one of the stones, forked into three branches, and slew three su monsters. Nevertheless, the heroes left the old man and traveled on.

When they reached Roaring Rock, they tried to sneak into the town and catch the demons unaware. Unfortunately, they were immediately spotted in the afternoon sun, and a fierce battle ensued. Cave wights and barrow wights swarmed around the fighters, and ur-viles were close behind. Falstaff and Valentine managed to stay back, and Falstaff constructed a demon circle which protected them. Meanwhile, a lore master called Godsbane appeared bearing an iron staff. He planted the staff in the ground and began to cast spells.

The four fighters battled on, but unfortunately, Blackfoot discovered that his sword was cursed. Every time he hit an opponent, the sword actually struck him in the back. Furthermore, he could not throw the sword away. Unable to help the group or defend himself, Blackfoot was forced to fall to the ground and feign ignoble death.

Sir Matthew employed his wand of wonder to great effect against the demons, but unfortunately this brought the attention of the lore master upon him. The demon disappeared for a few rounds, but when he reappeared, he called Sir Matthew by name and banished his soul with a powerful rune.

Meanwhile, Falstaff was able to use the Healer, one of the runes in his demon circle, to absorb damage from the fighters at only half the cost to himself and the cleric who was in the circle with him. Valentine then healed both of the spellcasters. For quite a while the system worked effectively, allowing Sir Thomas and U-Gene to fight much longer than ordinarily would have been possible. Finally, however, Sir Thomas was slain, and U-Gene was left by himself on the battlefield.

Many demons were dead, but it was obvious that the dwarf would surely perish soon. Therefore, Valentine left the magic circle, breaking its protection, and went to aid in the combat. Falstaff began to concentrate on the Elfstones, for surely the heroes were in a desperate situation now. Unfortunately, the Elfstones were made to respond to Elves, and the Half-Elf could not immediately master their power. The effort was so great that the Druid lost consciousness for a short time.

With Sir Matthew out of the way, the lore master turned his attention to the dwarf. Twice U-Gene was smote down by the demon, only to be resurrected by cleric's staff. Each time, the short fighter cursed Valentine, for U-Gene wanted to preserve every bit of his impressive constitution (even if it meant remaining dead). Just when it appeared that all hope was lost, Falstaff came back to consciousness and summoned the last of his strength. He bent the Elfstones to his will, and the bright yellow light shot forth. The beam past through his companions without harming them, but destroyed every demon that it struck. Nineteen cave wights, barrow wights and ur-viles fell, and their leader the lore master was slain. The remaining demons broke and fled. Along with much gold and four magical potions, Blackfoot gained the sword of strength, Titansfist, and U-Gene gained a magical battle axe forged by the dwarvish smith, Kaladin.

The Village of Roaring Rock was freed, and the heroes returned to Teufeldorf in triumph. In the aftermath, Sir Thomas was resurrected. Sir Matthew's soul was beyond recovery, but the noble knight was later proclaimed a saint.