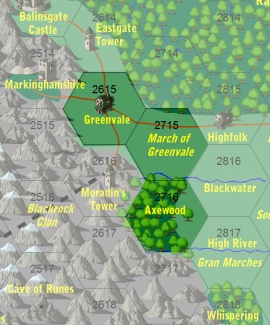 The March of Greenvale lies southwest of the Haggelthorn Forest in the rich fertile farmlands bordered on the west by the Shadowyarn Mountains. The capital town of Greenvale lies on the Lesser Farthing Road, acting as the major trading post for the entire March as well as the poorer and more southerly Gran March.

During the Second Demon War, Greenvale fought alongside its southerly neighbor and the Barony of Highfolk under the banner of the Southern Marches. Shortly after the war, the territory split into three small kingdoms.

The current Baroness of Greenvale is Victoria Beddington. During Hastur's Dominion, all the known members of the original Greenvalue noble family were hunted down and killed by the agents of Harek Bloodaxe. With Harek's defeat and the beheading of Tavish II, an extensive search was made to find the next living heir to the baronial title.

Victoria Beddington was discovered studying magic at the Collegium Magicium and was outside the reach of the war. Upon her return in 887 TA, Beddington renounced her ties to the wizard's college and took up her post - with some resistance by the local population who distrusted magic-users. Since assuming the title, Victoria has shown herself to be a clever leader and able administrator.

The Baroness of Greenvale rules from her small bailey in the capital, although trade disputes with the Shadowyarn dwarves and the farms of the Gran March are frequent. Victoria speaks fluent elvish and dwarvish, and rumors hold that she has elvish blood in her veins. She is well-liked and respected by her people.

Greenvale has one company of knights which are very well equipped and well-armored.

This great area of ancient forest lies principally within the borders of the Greenvale. The forest abounds with game, and it is carefully forested and maintained by those who dwell within its confines. The wood found here is generally employed for spears, shafts, bows, and arrows.