Difference between revisions of "Matcon"

The Invasion of the Old Kingdom has begun!

As the armies of the Reaches press deep into the Overlord's lands, the heroes directly assault the most guarded building in the Realm - the Palace of Theodric XIX. After easy victories during the surprise attacks of 918 TA, defenses against the invaders have been bolstered. Reserves have been called up, and the Overlord has ordered his mages to delve deep into the Palace's seemingly endless trove of artifacts to find a means to stop the Three Kings.

The gauntlet has been thrown down. Sharpen your swords and dust off your spellbooks - it's Matcon time again!

Suddenly, the sound of distant music sweeps down the hallway. Looking carefully at the sign, Hylax reads it for the first time. It directs patrons to the Overlord's Masquerade in the Throne Room - the biggest celebration of the year for the Old Kingdom. Dignitaries from every kingdom in the Reaches will be there. Traditionally, the party lasts until dawn when the Overlord's magicians provide some grand pyrotechnical display signaling the end of the revelry. It is both a challenge and an opportunity. Two stones of Alfric's Amulet are still missing, but the Throne Room beyond is filled with the most powerful figures in the Reaches.

Footstep approach - the slow slapping of sandals on the polished marble floors. An old man dressed in dirty brown robes and a long white beard is moving towards the Hall of the Fallen Host. The sounds of merriment fade, an adventure awaits.

While D&D has always been the focus of Matcon, a number of diversions have been created over the years. These have been thoughtfully blended into the campaign: Witenagemot and Warmaster providing a large-scale focus on the campaigns of kingdoms and generals; MTG Menagerie providing special one-time spells for characters; and even dwarf poker providing a way for dwarves to lose their warchests to the forces of evil. Matcon will continue to evolve over time providing new challenges from the twisted mind of CM the DM. 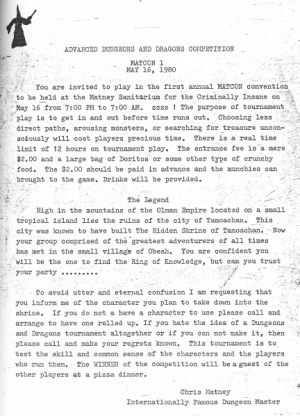