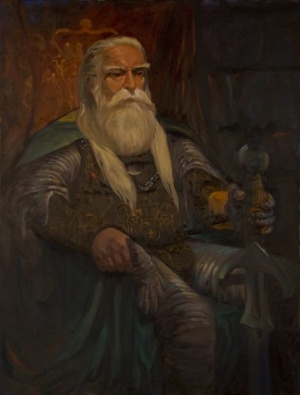 In the decades that followed the death of General Linius during the Third Orcish War, Teufeldorf and the Western Reaches flourished - accumulating wealth, power and influence. Leadership of the City-State was fluid - moving between the military commanders, religious priests and merchant kings as the focus of the people and nobles shifted. Some leaders were wonderful and others horrific - most served a very short reign. As the factions grew in animosity and daring assassinations escalated, the effectiveness of the Crown was severely challenged. By the late sixth century, anarchy began to take hold - hurting both the vibrant economic lifeblood of the City-State as well as the tranquility of the citizens.

In 585 TA, during a meeting that lasted almost three months - called the Sessorium - the various factions in Teufeldorf met in a single large chamber of the castle and debated how to solve the dilemma. In the end, all the factions lined up behind one of two choices. The first was Salman Wey, a descendant of Nicholas Wey, and a member of the Lawsmiths - a powerful, corrupt merchant alliance. The second was a middle-aged man named Allen Fitzcharles, a Paladin of the Order of Crusaders - virtuous, charismatic and a well-known defender of the people. Both were to be given a chance to present their case to the nobles, merchants and clerics of the City-State. The Great Debate began with a long, rambling speech by Wey - boastful, promising, and pandering. It was met with lukewarm applause. Fitzcharles' speech was only eight words - "I will give my life to protect you." After a brief, stunned silence, the hall erupted with applause. So incensed, Wey produced a poisoned dagger from his cloak and attempted to stab Fitzcharles. Quickly disarming the hapless merchant, Fitzcharles was said to have broken the dagger instead of turning it on Wey. Again, his words were simple, "Let the courts decide."

And so in August 585 TA, Fitzcharles, first of the Paladin Kings ascended the throne of the City-State of Teufeldorf and the Reaches - a chivalrous figure for the masses. With constant threats from the Orc Nation to the north and Sandal to the south, the Paladin Kings were quick to respond to threats to the people. Like the Ranger Kings of the Second Age, the Paladin Kings of the Third Age ruled for almost three hundred years.