Quest for the Staff of the Iron Ring 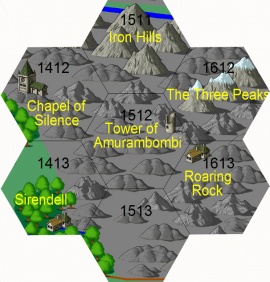 The first of the thirteen covenants had been opened by Count Demoney III. When the demons had first been bound by Benedict, the covenants were scattered to all parts of the Realm so that nobody could find them all. The whereabouts of the other twelve remained a mystery to all. With that knowledge, King Gregory set about trying to stop the one army of demons that had already been loosed. The party was sent on several missions in order to find magical items useful for battling demons. This is the story of the first such adventure.

The party journeyed to the Iron Hills east of the City of Teufeldorf in order to find a staff with a magical iron ring attached to one end. The staff and ring were reputed to greatly aid in the use of demon circles, and King Gregory desired to use it in the battle against Heartswallower. The party was given only one clue, an obscure name with no meaning. They set off to find the staff and encountered several groups of hill giants upon entering the hills. This tale is short, however, because the heroes were called back by a king's messenger to embark upon a more critical adventure before finding the Staff of the Iron Ring.