Search for the Priestess of Amurabombi 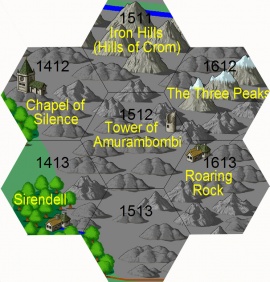 Adventure To Search For The Priestess Of Amurabombi

In the castle of Valdemar, Falstaff was saved from the giant lizards by the necklace of Amurabombi. In return for this service, the Druid had to accept a quest. Not long after King Gregory the Even-Handed was returned to Teufeldorf, the High Priestess of Amurabombi came to collect the marker. First, she reclaimed the necklace and replaced it with a ring. Then, she spelled out the quest. Falstaff, and whatever friends would go with him, were to find the High Priestess' daughter, herself a priestess. The only clue was a charred note that indicated a time and place for a meeting. The Party set out for the tower in the Iron Hills which was named in the note.

Along the way they were ambushed by a small army of hill giants. Falstaff was able to command a few of them, but Zephaniah saved the day with a mass charm spell.

The heroes proceeded on and finally reached the tower. They entered through an upper level and were soon confronted by three powerful individuals, a sorceress and two fighters. One of the fighters had a magic sword which actually sucked up Sirfexx and Vince the Invincible (we are awaiting a ruling regarding whether this was a technical "vincing" for Vince or not). Falstaff neatly silenced the evil one with the Finger of Death. As the outcome of the battle began to appear certain, the sorceress fled. Hylax then unleashed his new Moon Rune, which killed the last fighter and destroyed all his treasure.

Afterwards, the party was able to free Vince and Sirfexx, but no one was able to wield the evil sword that had trapped them. The heroes found the captured priestess tied to a bed. She was released and returned to the High Priestess, but later it was learned that the priestess was indeed evil, and one of the fighters had been her corrupt lover.