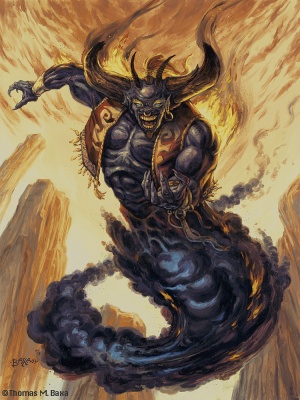 Sura-An-Nami is described as a demon-shaped creature with horns and a muscular body. Formed from magma, his long face is accented by a pointy beard of dripping magma. According to legend, the ground rumbles as the creature speaks, its voice low and rumbling.

Sura-An-Nami is a djinn who created the Djinn's Labyrinth, a legendary artifact of wondrous power. The Djinn's Labryinth is activated by placing a small gold ball - made from coins freely given by the victim - into the wooden device. As long as the ball remains in the Labyrinth, the victim or victims are trapped inside its illusory confines. After six years, the victims are released - although they can be re-trapped if a new gold ball is fashioned in the fires of Sura-An-Nami's molten lair.

It is rumored that Sura-An-Nami's lair is in a cave deep under the great volcano Ssruthu in the Forbidden Lands.

In 901 TA, the three kings and their companions were trapped inside the Labyrinth by Nihilo - a mage who spent a lifetime collecting gold pieces from the most powerful denizens of the Realm. This action is rumored to have been done in league with Valdemar, deposed Baron of Sandal. Upon their release, which is rumored to have been accelerated by No Cha, Nihilo was killed and the Djinn's Labyrinth and Nihilo's gold and account book were taken by the Crown.

Nihilo's account book contained a list of all the beings that Nihilo had collected gold from, their location, the date the gold was given, and most importantly the code number to match the names with the 4152 gold balls he had collected. In 907 TA, the code book was destroyed when Ernest Goodfellow was submerged in acid during a foray into the Overlord's Undercroft.