The Rescue of King Gregory 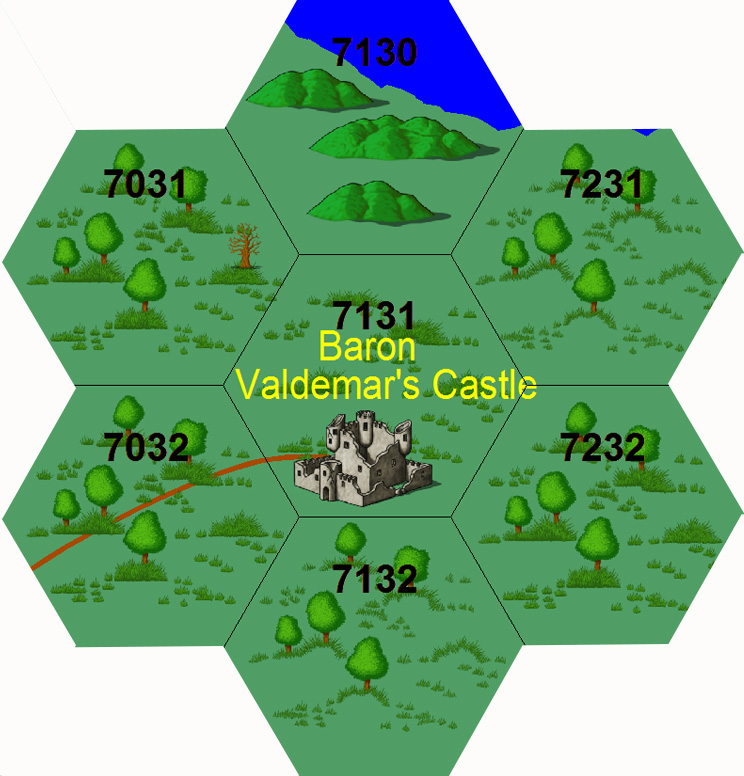 Unfortunately, the party could not act fast enough to prevent Valdemar from capturing King Gregory the Even-Handed. The Party traveled south to Sandal, where the King's forces were preparing to lay siege to Valdemar's Castle. There the heroes entered through the bottom of the swamp surrounding the fortress.

Once inside, they found themselves in the lair of Umbecantu the Lich. Hostilities broke out, but Falstaff was able to encase the lich in one of his druid spells, The Trap. Fearing the terrible damage that she could suffer, Umbecantu struck a deal with the party. She would let them pass unhindered if they would rescue her pet crystal dragon. A priestess of Amurabombi had managed to remove the ruby heart from the dragon, and she stood for all time with her sword poised over the heart ready to end the dragon's life forever.

The party agreed to help, and they proceeded to the dragon's chamber. Falstaff suggested that he cast a Druid's Shield spell over the heart. Then the priestess could be subdued before causing harm to the dragon. Hylax overrode Falstaff, however, and cast a Fetch spell which was designed to magically retrieve small objects. Unfortunately, the heart was anchored to the table and could not be fetched. The priestess detected the spell and swung her sword. As the heart shattered and the dragon's death rang out, Umbecantu appeared on the scene.

Enraged, the lich fought the party with powerful magic. U-Gene was humbled by a petrification spell. It was not to be the last time the sturdy dwarf would become stone. Nevertheless, Umbecantu could not withstand the might of the party. Soon her unlife faded into non-existence, and her treasure was taken. Reinwood detected the presence of its brother, Moonblade, and the surly staff ordered is servant Hylax to retrieve the rune dagger.

Hylax's work was not done, however, for the party had to pass the lair of a great red dragon. The gnome confronted the fire breather bravely, but the dragon was not to be easily defeated. Hylax had protected himself with walls of force, for the dragon could cast disintegrate spells seemingly without end. Finally, Hylax had to try a desperate ploy, or he would surely die. The spellcaster summoned his runebrother, Justin, and together they defeated the great beast.

Finally, the party infiltrated the underground barracks of Valdemar's guard. The found a round room which apparently teleported anyone in the room to the upper chambers. Unfortunately, the party did not know how to operate the mechanism. Pressing the button once started a counter running down from ten. If the counter was not pressed on the correct number, the teleport would not activate, and monsters would attack. The heroes triggered the trap and had to fight a horde of stone golems.

Finally, defeating the rocky foes, The Party had to contend with the garrison. The battle had attracted attention, and the party had to kill a few guards, take their uniforms, and infiltrate the command post. There the disguised heroes claimed to have caught the intruders (the undisguised members). The ruse worked, and the party gained a second chance at teleporting in another chamber. Unfortunately, the trap was sprung again, and this time the party had to fight giant man-eating lizards. Falstaff and U-Gene were swallowed whole. The rest of the party eventually defeated the lizards and cut them open. Falstaff, who was wearing the necklace he had taken from the priestess of Amurabombi, was still alive. However, U-Gene had suffocated, and Zephaniah had to resurrect him.

Finally, the party was able to follow another group through the teleporter and gain access to the upper levels of the castle. A powerful mage operating a check point barred their way, but Hylax and Falstaff threw an augmented fireball which utterly destroyed the magic user, along with all treasure and clues. This event was the precursor of the nuclear option and other acts of wanton destruction by the power-crazy Hylax.

Undaunted, the party journeyed on. Ultimately, they reached a chamber guarded by two lion-like animals which shot deadly beams from their mouths. The passage beyond was blocked by a wall of energy. Hylax used a disintegrate spell to create a passage through the stone beside the magical barrier. Then, polymorphed into a bird, the gnome flew past the lions and into a chamber where the weakened King Gregory was being held. Unfortunately, King Gregory could not survive being moved. Hylax, successfully retrieved his body, however, and the party fled the castle. They were able to return to Teufeldorf, where King Gregory was brought back to life.