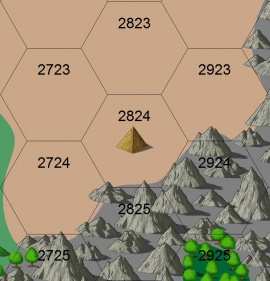 The Tomb Kingdom was formed at the end of the Hastur Rebellions when the skeleton armies of Grim fled south before the armies of Dugald Axeworthy.

During their occupation of Teufeldorf, the liche priests of Grim delved deep into the libraries of the City-State. There, they found evidence of a large pyramid complex located in the Sands of Time. An adventuring logbook written in 829 TA had discovered the complex, although there were no maps and the tale did not provide a precise location for the complex. Early in his fifty year reign, Grim sent a number of scouting missions to the area, finding the complex in 860 TA. While clearly of otherworldly design, the complex was empty and remote. Grim created a stronghold here. These large pyramids are said to be connected by massive underground tunnels and chambers. There, the liche priests could create minions from the fallen bodies of Grim's foes in ideal conditions.

A brief assault was made on the pyramids in 904 TA by a commando squad sent by the Crown. The objective was to stop the summoning of great sandwurms to the service of the Tomb Kingdom. While the ceremony was disrupted, several sandwurms were summoned. Eyewitness accounts tell of the pyramids sinking into the sands as a defense against additional attacks from the Crown.

Although tiny, barely larger than the garrison of some large cities, the Tomb Kingdom is protected by its hostile environs. There is no water nor food in the bleak, desolate desert. Near the pyramids, there is no life whatsoever. Undoubtedly, the forces of this undead kingdom will grow with time. Currently, the Tomb Kingdom is led by Nightshade, a faithful priest of Grim, who took command when his master was slain during the Storming of Teufeldorf Castle.

Since the beginning of recorded history, the Sands of Time has intrigued and challenged mankind. It is supposedly filled with riches - copper, silver, gold and gem minerals. The harsh climate, wildly varying temperatures, and hostile inhabitants who battle any intruder with ferocious determination and blood lust tend to discourage exploitation. The dervishes rumored to dwell in the bordering hills likewise turn away would-be explorers. One or two organized forces have attempted to penetrate the Sands of Time, but none have ever returned to tell what happened.

In recent time, the Cave of Runes was discovered again in 885 TA. The cave was hidden behind the village of Skarit at the extreme southern end of the Shadowyarn Mountains. The village was a base camp for scorpionmen priests who were searching the Cave of Runes for a teleport to the Temple of the Amphisbaena. At the temple, they sought the boon of the Amphisbaena. In 885 TA, the area was attacked by humans from the Reaches. The priests were killed, the villagers fled the area, and the sands eventually claimed the buildings of the village of Skarit.