The Hastur Rebellions encompass a three year period from 883-885 TA. For the previous fifty years, the Reaches were under the tyrannical rule of Hastur's three sons in a period now called Hastur's Dominion.

Small pockets of resistance in the Reaches were common throughout the early years of Hastur's Dominion. These were brought together in early 883 TA as The Pentaverate - with rebel leaders from the various regions joining the Monks of the Wait, a sect of the Church of St. Theodore. The unexpected return of U-Gene, Ernest Goodfellow, Vincent Fleetwood and Hylax, sparked an organized large-scale assault on the regions strongholds, rallying the citizenry, and eventually overthrowing Hastur's Dominion.

This three-year period of unrest is now known as The Hastur Rebellions. 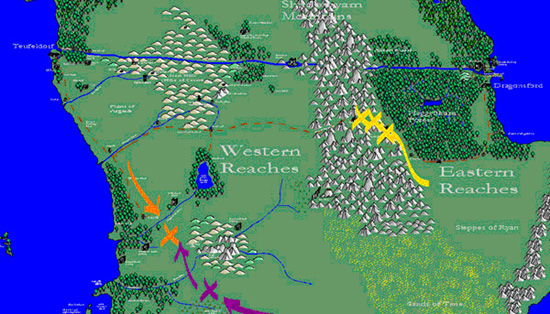 883 TA was a time of great rebellion in the Realm. Lady Laura, leader of the forces seeking to end the tyrannical rule by the sons of Hastur, reported that Sir Ernest Goodfellow and his companions would soon return to the Realm. She persuaded her peers to raise three great armies to march on the strongholds of the sons of Hastur.

In the Western Reaches, the small southern baronies amassed the Army of the Western Reaches. Numbering almost two thousand men, the army swept north along the coast towards Teufeldorf. Defeating Grim's army of undead in major battles in the south, the army was successful in recruiting local militia to join their cause. By September 883 TA, the army reached the Whispering Hills near the ruins of Brixworth Castle with close to three thousand men. While the army was crossing the Wilderland River, Grim struck with almost ten thousand undead warriors - in broad daylight. The Army of the Western Reaches was defeated, the leaders were eaten by Grim's ghoulish lieutenants, and the bulk of the troops were scattered.

In the Eastern Reaches, the elves and humans banded together to field an army against the mercenary orcs of Harek Bloodaxe. Although boosted by the overthrow of King Trafford at Dragonsford Castle in earlier in the year, the Army of the Eastern Reaches was disorganized and without leadership. Successful in small hit-and-run battles, the fractious leadership of the army did not mount a successful attack against Dragonsford Castle.

Only the Dwarven Army numbering over four thousand stalwart warriors were successful in reaching their objective. Under the command of General Dugal Axeworthy, the army entered the foothills heading west into Shadowyarn Mountains towards the Shadowkeep in late September 883 TA. After a difficult three day march, they met the army of Atli the White under the command of General Kendall Praetor at the Lower Narrows. Luck and discipline were on the side of the dwarves. Atli's army was without wizards or dragons. Fighting from an inferior position, the dwarven footmen routed the human knights twice before General Praetor fled the battle with his captains.

Joined by reinforcements at the Goldkin River, General Axeworthy's army continued their quest past the Whispering Falls, up the steep switchbacks, finally arriving at the Upper Narrows. The mood of the troops was upbeat with the arrival of the giant dwarven cannon, Mons Meg. A second battle at the Upper Narrows proved more successful than the first for the Dwarves, the white cloaked human army was routed and casualties were very light on the dwarven side. Rumors of General Praetor's death were unfounded, however.

The fall of the Shadowkeep to U-Gene and his companions caused several hundred troops loyal to Atli to flee down the pass. There, they joined the remaining troops of General Praetor's army. The dwarves, bolstered by reinforcements from the Clan of the Stone Meadows, continued up the pass. The final battle of the 883 TA military campaign season took place at the Giant's Teeth, a narrow pass where a large boulder splits the battlefield and two ancient bridges cross over a wide crevasse. Over four thousand dwarves routed a smaller force of humans trapped in the narrow pass. While General Praetor fled with a small band of White Cloaks, the Shadowkeep and the passes east and west were clearly under control of the Dwarves.

Although not entirely successful, the rebellions against the Sons of Hastur which started in 883 continued the next year. In late 883 TA, U-Gene was crowned king of the dwarves of the Shadowyarn Mountain. The kingdom was called Durinshold after the ancestry of U-Gene. 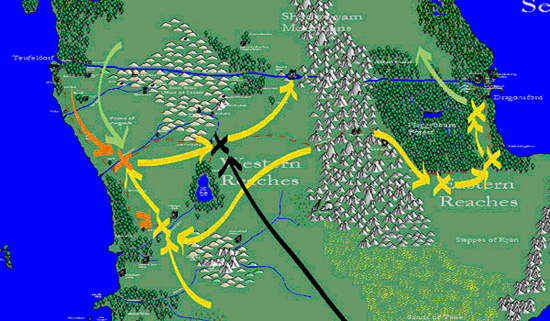 King U-Gene spent much of 884 TA rebuilding his capital city. After fifty years of rule by Atli the White and several hundred years of human rule before that, years would be needed to erase the stain of non-dwarven influence on the city and its castle. The city and castle have been renamed to their original dwarven root, Dwarrowdelf. Rebuilding was started on the Great Hall and Dwarven Basilica, the holiest shrine to dwarven heroes, defiled by the Broken Magi. Both projects would take years and hundreds of thousands of gold pieces to accomplish. The migration of dwarves from the mountains to the capital has continued in a steady stream since U-Gene's coronation.

Atli's abomination, Shadowkeep, has been thrown down.
The human Paddington is no more.
The mountains have reclaimed their rightful crown.
Hear Dwarrowdelf, the dwarven roar.

Atli the White, fleeing the destruction of his forces at the Shadowkeep, retreated to his brother's stronghold at Dragonsford. The consolidation of the forces of good in the Shadowyarn Mountains effectively split the Eastern and Western Reaches into two battlefields with the campaigns of 884 TA focused there.

In the Western Reaches, Lady Laura led the forces of good (the human leaders being eaten by Grim's ghouls at the Wilderland River in 883 TA). In a similar tactic to the 883 TA campaign, the forces of the Army of the Western Reaches began gathering forces in the south, pushing north along the coast towards the ultimate goal, the city and castle at Teufeldorf. While initially successful, the horror of the Wilderland River massacre hung over the troops of good. The undead forces of Grim were joined by several units of orcs and goblins from the north and a brigade of evil humans from the southern kingdom of Sandal. While avoiding large-scale losses, Lady Laura lost control of the southern baronies, eventually retreating to Rivershaw Castle near the Shadowyarn Mountains. Grim's grip on the Western Reaches strengthened significantly during 884 TA.

In the Eastern Reaches, the army under the control of the High Mark the Thirteenth Baron William of Markinghamshire swept southwest out of Markinghamshire, picking up recruits before making base camp in the northern Steppes of Ryan in mid-March 884. About ten days later, nearly four thousand troops began the long march north along the coast towards Haggelthorn Forest. At the edge of the forest, the Army of the Western Reaches met with orcish resistance in the form of the First Army of the Bloody Claw led by the orcish General Truk. Baron William's forces routed the orcs, pursuing them north towards Dragonsford. Several days later, the remaining army met the First Army of the Bloody Claw reinforced by additional orcish troops from Dragonsford Castle.

The Battle of Dragonsford took place in a meadow encircled by forest, about a days march south of the town of Dragonsford. The day would have been won by the orcs, had not word reached General Truk that Dragonsford Castle had been overthrown by a small commando force of wizards and heroes. Eye witnesses claimed that Atli the White and Harek Bloodaxe were both slain, terminating the contract between General Truk and the sons of Hastur. The orcs retreated from the field of battle, moving north through the Haggelthorn Forest, over the River White, and back to the Orc Nation.

With the Eastern Reaches and Shadowyarn Mountains secured and Atli and Harek both killed, the rebellion against the Sons of Hastur pressed forward for a third year. Hastur, fleeing the loss of the Eastern Reaches, retreated to his son's stronghold in Teufeldorf. Although the orcs provide a constant threat to the east, the rebellion was effectively a one-front war with Grim's forces to the west.

In late 884 TA, King Ernest Goodfellow reclaimed the crown of the Eastern Reaches. The local baronies and dutchies were thrown into turmoil - although all would eventually pledge fealty to the new king. In the short term, concerns over orcish raids and the continuing rebellion kept the vassal lords in order. Dragonsford Castle, having taken substantial damage during the fighting in 884 TA, underwent a significant rebuilding projects with many more improvements happening during subsequent years. 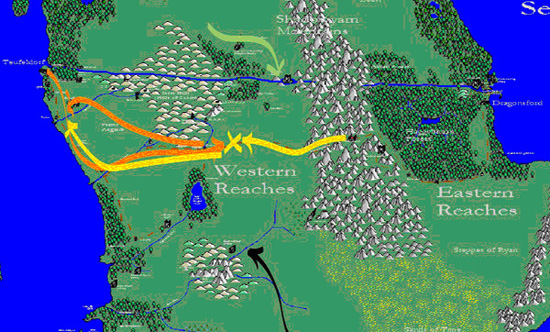 In the Western Reaches, Dugald Axeworthy led the forces of good down the pass from Dwarrowdelf. Intercepted coded messages from Grim's undead tomb king, Shallowgrave, were deciphered. Based on this intelligence, the Army of the Reaches intercepted Grim's forces at Flatstone, en route to their base camp. Taking up a solid defensive position, Dugald's army routed the undead hordes sending them fleeing back towards Teufeldorf. This victory prevented a planned undead attack against Rivershaw Castle. It also pulled garrisoned troops from Greyheath and Azgarde, allowing a small commando strike force to destroy the Crypt Masters at those locations.

In the Summer 885 TA, the forces of Dugald Axeworthy marched on the city of Teufeldorf. They met the last line of defenses at the village of Vardan, south of the city along the Great Farthing Road. Successfully interpreting enemy intelligence, several hundred ambushing black orcs were discovered. The remaining undead were quickly routed by the superior forces of the Army of the Reaches.

Several great sailing ships approached from the west. Although at first mistaken for enemy warships from Sandal, it was soon discovered that the High Elves of the Radiant Dawn had arrived in the Reaches from the great forest of Elothian. The surviving undead troops headed south presumably towards the Sands of Time. Several days later, the combined army of men, dwarves and elves reached the gates of Teufeldorf.

A raid on Teufeldorf Castle was successful, and both Grim and Shallowgrave were reportedly destroyed by the dwarven King U-Gene. Dugald Axeworthy placed Teufeldorf under military rule and general order was established. While roving bands of skeletons and undead were still common, an exodus of displaced peoples had begun arriving in Teufeldorf. Teufeldorf Castle remained off-limits to the general population for a few months.

With all its military objectives accomplished, the three year Hastur Rebellions came to a close late in the Summer of 885 TA. Later that same year, Vincent Fleetwood was named King of the Western Reaches. Some have called the Hastur Rebellions "The Three Kings Campaign".

The First War of the Reaches

Although the threat from Hastur and his sons was gone, the Reaches - now three separate nations made up of dozens of kingdoms - remained in turmoil. The orcs to the north and the Sandalese to the south both represented present dangers to the newly-minted Crown. It would take five more years for the Three Kings to settle the land - a war which would be called the First War of the Reaches.