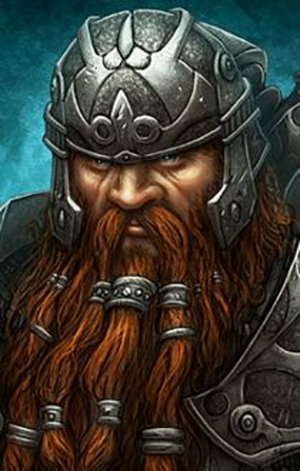 U-Gene is the King of Durinshold. He is a middle-aged dwarf of unparalleled martial prowess. He is the wielder of the Raiments of Dwarven Justice, carries a runestaff and wears Durin's Crown - a mark of his family heritage. U-Gene is the most famous living dwarf in the Reaches.

U-Gene was born on October 12, 774 TA into an elder family of the Stone Meadows Clan. While his parents were miners and merchants of gems in the region, U-Gene excelled at hand-to-hand combat and military strategy. He consumed all the historical writings of the dwarven generals and quickly distinguished himself as a formidable fighter and upcoming leader of the clan. At that time, the nine clans of Durinshold were not united, each waging constant battles against the Orc Nation and powerful denizens of the Shadowyarn Mountains independently. The dwarven capital had been overrun by the humans who used its location as a trading and mercantile center.

In May 826 TA, U-Gene's parents were killed in a collapse of the family mine. Subsequent investigation pointed to foul play and several dead urviles and cavewights connected the plot to the Demons of the Covenant. With no remaining family in the Stone Meadows, U-Gene set out for Teufeldorf to fight in the Second Demon War (821-828 TA) and seek clues about the murder.

In June 826 TA while in the Iron Hills east of Teufeldorf, U-Gene chanced upon two knights of Saint Gilbert who were seeking adventurers to fight the legendary beast, the Garnath. Along with the knights, an adventuring gnome, Hylax, and a leader of the Order of the Knights of the Kingdom, Sir Zachary, convinced U-Gene to undertake the mission. After witnessing the dwarf's battle prowess, Hylax and Zachary pressed U-Gene into service to King Gregory the Even-Handed in the Second Demon War. U-Gene was instrumental in the binding of demons under Mt. Todd in October 828 TA, and he was named a Dwarfriend for his service.

The threat of the demons eliminated, U-Gene became a stalwart champion of the Durinshold dwarves. While instrumental in many campaigns, U-Gene's most notable accomplishment was the siege of the Shadowkeep in 883 TA. U-Gene was credited with slaying Harek and Atli the White, two sons of Hastur. The retaking of the Shadowkeep represented the turning point in his efforts to unite the dwarven clans. First, the dwarven capital was retaken and claimed for the dwarves. Second, the Crown of Durin was recovered from the catacombs beneath the city. This discovery was pivotal as it revealed that U-Gene was a true descendant of Durin - and the rightful heir to the dwarven throne.

In October 883 TA, U-Gene was crowned King of Durinshold. The dwarven capital was renamed Dwarrowdelf, its original name. Re-construction began on the castle, basilica, and surrounding city. During the First War of the Reaches (886-890 TA) and the Second War of the Reaches (899-907 TA), the dwarves prospered and U-Gene gained the reputation as a great builder of towers, castles and the Long Tunnel beneath the southern Shadowyarn Mountains. His general, Dugald Axeworthy, is considered the greatest military mind of the Third Age.

In 917 TA, U-Gene and the Crown declared war upon the Old Kingdom. His current whereabouts are unknown but presumed to be supporting the war effort.