Voyage of the Wanton Wench Prologue 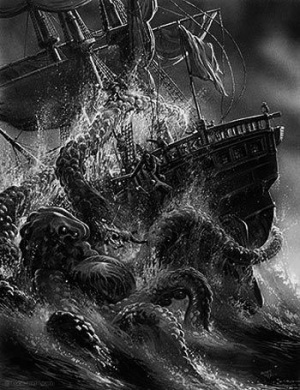 Voyage of the Wanton Wench

The Western Reaches have fallen to the Old Kingdom - or so you have been told. The Eastern Reaches are filled with werewolves and strange folk from the Wolfshaunt who wander the streets by night. Yeah, times are sinister, but that's no reason for the Crusader of Portsmouth, Jana Blackfire, to come down on honest citizens and merchants. She rules Portsmith with an iron fist. And her zealousness seems to be increasing. Bah, who does she think she is? Bah to her and bah to her Order of Crusaders.

Her latest edict, not so affectionately known as The Gavel, gives the Order of the Silver Throne immense power to dispense punishment unilaterally. So, the last mayor of Portsmouth had a bit of demon blood in his veins, and, yeah, he had some peculiar appetites. That's probably why the good people of this port chose Blackfire - charismatic and honest to a fault. Aye, and there's the fault - her new rule of law is filling the prisons with merchants and traders just looking to make an honest profit. A simple brawl - jail. A whisper against the King - jail. And, so you find yourselves in a stinking jail cell with five stinking companions - all of you innocent by your own accounts - and just about to be branded by the holy Order with the mark of The Gavel.

A bucket of hot coals sits nearby, a blackened branding iron heating. Footsteps from down the corridor - guards undoubtedly along with that ugly, scarred Justice Henry Meekson. You hope his face will not be the last you see. Suddenly, you hear a tapping - much too rhythmic to be rats. Someone is sending you a message. After six weeks in this stinking cell, maybe there is hope of rescue. The others hear it too. Maybe together you can decipher the code.

As the leaves begin to change color and a cold wind blows off the mountains, the autumn campaign arrives! On game night, cocktails will be served from 5:00-6:00pm and the game will start promptly at 6:00pm. We will order dinner, and the game will run until midnight.

The Voyage of the Wanton Wench will use Pathfinder rules. We will roll up characters at the first session. A few things to keep in mind. This will be a seaborne adventure. Also, no lawful good characters need apply.