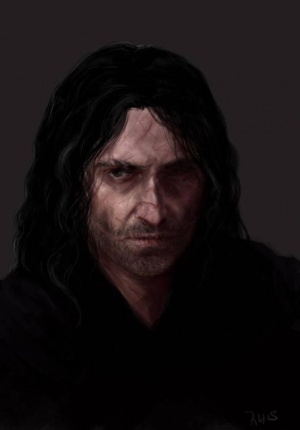 Willowby Grimsby, Baron of Grimsby, is a rail thin, dark featured man of a foul disposition. Unlike the other barons of the Western Reaches, Willowby detests the idea of the nobility, land grants and honorifics. He refuses to call his lands a kingdom and has known to fistfight with those that mistakenly call him Baron.

Pragmatic to a fault, Willowby does not keep a mansion in Teufeldorf. In fact, he has never been to the City-State. His mission, as has been the Grimsby family mission for hundreds of years, is to unfalteringly protect the road leading south into Sandal. Willowby has carried out every request made of him by Crown without question or complaint. A competent soldier and excellent bowman, the soldiers serving under Willowby are respected for their skill at arms. For these reasons, he is given great latitude in his eccentricities.

Willowby is married to the third daughter of the Baron of Overton, Annabell. Through the marriage, Willowby has ceded his vote in the council of lords to his wife who spends much of her time at Crossgate Castle and occasionally in the City-State with the Overton clan. The couple does not have children.

Willowby is known to take tracking excursions into the Endless Forest and south into Sandal. While these are described as scouting missions, rumors hold that the Baron keeps several Sandalese mistresses. These rumors are bolstered by late night meetings with strangers coming into town on business but leaving before the sun comes up. When asked about the meetings, Willowby responds with silence and a withering gaze.