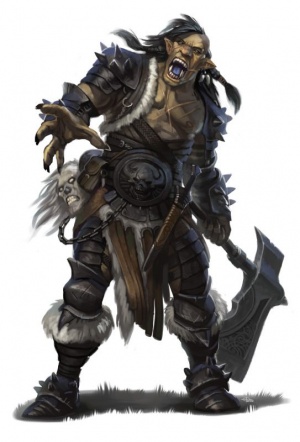 My earliest memories are of my mother and I sitting around a campfire for dinner and her telling me stories of our family history. I always loved hearing about my grandmother and how as a young woman she was the strongest and most fierce of our clan. That she could outrun, outfight and outthink anyone else in the village. She traveled to exotic places and had great adventures. I loved all the fighting parts but my mom would always throw in the part about how on one adventure to a place far away she had gotten separated from the rest of her group. She sought shelter from a terrible storm. She lucked upon a cave and went inside. Much to her surprise she found it already occupied. She drew her weapon in defense but the stranger smiled and their eyes met. My mom would always smile at this part and say that they didn’t know who enchanted who but knew they were meant for each other. After a night of passion, they both feel asleep. In the morning, the storm passed and my grandmothers’ adventuring party found her. The stranger was gone and for all the years thereafter she would remember that night fondly. Red eyes and the name Borak was all she could clearly recall. My mother was born within the next year. Unfortunately, I never got to meet my grandmother.

Mom was awesome. Beautiful, smart, fierce and the best of the clan. She followed in my grandmothers’ footstep by seeking adventure away from her small village of “Nowhere” on the Isle of Skye. When my grandmother got sick she returned home to care for her. It was during that time she met my father. She was in the market one day when a party of orcs came to town to trade. The village was full of berserkers and had stuck a treaty out of mutual respect with the local tribe of the Bloody Claw Warband. When the orcs came to town there always ended up being contests of strength and friendly bar fights. On this fateful day, my mother decided to participate in the festivities. After hours and hours of competition only two remained standing - my mother and my father. He was impressed by how she could take everything he had and still be standing. No other, orc male or female had ever done that. She loved that no matter how much he wanted to beat her she felt he was holding back enjoying their “fight.” They would see each for months afterword’s and always spend time together whenever father would come to the village. Eventually they were bound to each other in a small ceremony where only there true and understanding friends attended. To avoid problems, they moved to a secluded area on the mainland. I was born there 27 years ago. They would say that even though one of them was orc and one a human berserker that I was the best of part of them both.

When I was seven everything changed. I was happy learning to hunt, fish and fight and anything my parents would teach me. One day, after a big hunt we made a campfire and sat down to feast on our hard work. As we were finishing our meal, my dad stood up quickly and told me to hide. I remember the look on his face as if it was yesterday, a combination of fierce and concern. I ran as told and sought shelter in a row of shrubs. My mother was up and stood beside my father. They both let out battle cries the likes of which the world had never heard. Then I saw what had them ready for battle. A party of adventurers led by a huge Paladin in silver armor was charging them. They were outnumbered 3 to 1 and normally not a problem, but today was different. The magic that was cast on them was powerful and old. The battle was epic but eventually my father would fall, cut down by the foul Paladin. There was a cleric in the party of the attackers who cried out to his fellow fiends that my mother had demon blood in her and must be destroyed. She glanced in my direction with such love and sadness that she will always be with me. She yelled “If a demon is what you want a demon is what you get.” I knew she had powers gained from my grandmother in that cave long ago but I had no idea how strong she was. Any bear cub's mother would be envious of how she fought that day. The cleric was the first of our attackers to fall, ripped into the tiny pieces he was. Followed quickly by the wizard who got too close. Their archer managed to land a few arrows and that Paladin, that horrible cruel man, struck the killing blow. I loved my parents and had obeyed my fathers’ orders but I could stay hidden no more. I charged to where my parents were struck down, I picked up my father’s sword. The Paladin laughed at me as I tried to land a strike that just bounced off his armor. He told me, “You are in luck foul offspring, this is the day you are slain by the Noble and Powerful Sir Randall, Knight of Paulus”. As he was preparing to dispatch me, one of their party stepped forward and said “Stop!” It was a frail looking old woman who I had not seen attack my parents. She continued, “Sir Randall, I tried to stop you before this all began. These beings might be evil in nature but had love in their hearts. This is but a child and I will not let you harm him.” Sir Randall, in all his self-righteous arrogance said, “Stand aside or be struck down too.” All I remember is that as the blade came down to end us there was a bright light and a sense of floating. When I awoke, I found out we were on the other side of the world and safe.

My benefactor was Melisandra Oliviere a very old and powerful human sorceress. She had used a very powerful artifact she had in her possession to make our escape. She told me that she had fought hard to prevent the attack but that the rest of her companions would not be deterred. She apologized for my parents’ deaths and told me that I was welcome to travel with her for as long as I liked. She swore to protect as if I was her own and she was always true to her word. I had nowhere else to go and a long way from where I had lived so I stayed with her. Melisandra was a kind soul who often told me that she judged everyone by not what they are but by how they acted towards her. It is a philosophy that I use today and has led me to be truly neutral. If a good character or evil character befriends me I can live with that. Threaten me and I don’t care what your alignment is. In my time with her Melisandra taught me the ways of magic and one day I hope to be able to cast sorcerer magic in her honor. We traveled a lot and everywhere we went I would learn something. I have always loved fighting and take every opportunity to learn new techniques and skills. It has been about 8 years now since Melisandra passed away and I lost a second mother.

I have been traveling the lands in search of adventure to honor my heritage. I hope I can live up to their hopes for me. Let the adventure begin.