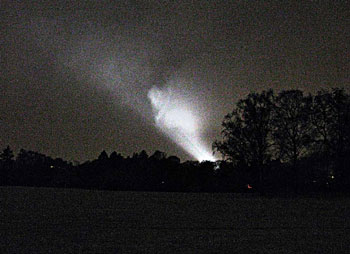 Bayhaven is a small island, southwest of Southhampton proper, that never quite took off as a resort community the way the developers had hoped. Instead, it is a bed of crime, poverty, and overcrowding. Despite its bad reputation, people need a roof over their heads, and the rent is cheap in most places. The island has a ferry that runs twice a day from the mainland like clockwork: once at 6am and again at 6pm. The only way off the island other than that is with a rowboat and a strong back.

A History of the Bayhaven Lights

Since 1688, the Ghost Lights have been spotted over the little island that came to be known as Bayhaven. Scientists claim the Ghost Lights are atmospheric anomalies recurring at random, yet somewhat predictable intervals roughly equating with the Summer and Winter equinoxes. They believe the unique composition of the soil, combined with varying degrees of humidity throughout the year create the conditions causing the Ghost Lights. The point of dispute among scientists is the complete absence of the lights some years. The light shows last from a few minutes to several hours, seeming to descend like wispy clouds before disappearing into thin air. Crackpots claim to have seen witches, devils, and flying men within the translucent greenish yellow glow. At their brightest, the lights can be seen from Southhampton.

In 1882, a land developer bought up the worthless scrap of land for a song and sought to develop it, but the strange Ghost Lights spooked more people than it attracted. The developer sank a lot of his money into marketing the Ghost Lights as the Bayhaven Lights. He even had a play at the West End theaters, "Bayhaven Lights, Bayhaven Nights" that caught on for a while. The name stuck, but it was too late. His company went belly up, before he could fulfill his dreams of developing a cozy little resort community.

The new owner had other plans, and dubbed Bayhaven “the land of affordable living”, and created the shabby little island that Bayhaven is today.