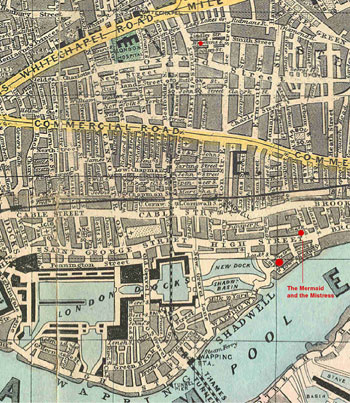 The docks are a chaotic scene of hard labor. Ships line the shore, with men swarming over them loading crates and bales into the open holds. Here and there small groups of drunken sailors wander, singing and carrying on. Pedstrians must watch out for the passing of horse-drawn wagons pulling goods up and down the dock. Gulls fly by screeching at the men below. Countless rats are seen crawling down the mooring lines to the ship. The water in the harbor is an oily, debris-filled soup. The powerful odor is extremely putrid, carrying the traces of oil, fish manure and the sea.

The dockmaster is Theodore Tupper. He runs the docks with a firm hand. He is not afraid to bring in longshoremen to break up a fight or call Scotland Yard if needed. An old hand at the game, he knows a nautical bluff attempt.

Several notable locations are in the Lower Shadwell Docks:

Rumored to be the lair of the Haunting Hand. A stunning two-floor stone and brick building built in the early 18th century has fallen into ill repair. Four ornate turrets in the corners and all of the ground level windows of this building have long been sealed with brick and mortar. Only a few windows and two street-facing balconies on the first floor still have glass in them. A set of crumbling stairs leads to a set of double doors, over which hangs a crooked and fading sign, “Flop House”.

The Maid and the Mermaid

This pub is a classic wharf-side dive. It is dirty, dark and smell vaguely of fish. The windows at the front of the building are frosted, requiring patrons to enter to see inside. A long bar runs the length of the room with a small storage room and office in the back. The main room is filled with booths – deep and dark. There are candles in each alcove, but many have been extinguished. During normal hours, the room is generally full with a good crowd standing in the middle of the floor telling stories and dicing at a couple of free-standing tables. The usual haunt for the crew of the Christabel as well as the cultists.

This large stone warehouse is unremarkable, seemingly built along with most of the other structures in the docks area of Shadwell. There are no windows in the building, and two large reinforced wooden doors sit at either end of the old building.

The interior of the warehouse is one giant room approximately 130 feet wide by 160 feet long. The walls are 25 feet high and the roof pitches to a point almost 45 feet overhead, although it is hard to tell with the details lost in the gloom. The warehouse smells of wet leather, rotting wood and seaweed.

The floor of the warehouse is clean, showing that its use is frequent and recent.

Along one wall are stacked crates and boxes, piled in small groups. Some are covered with nets, but most appear mundane. The sole exception is a very, very large wooden crate 20 feet square and about 25 feet high. It is made of exceptionally thick wood and surrounded by a rope tied to barrels, forming a barrier around the box.

Along the other wall are some tables and benches laid out to form a common area. A small kitchen area is in the corner. Mid-way down the wall is an office with double-doors leading in. Beyond that are more crates and another roped-off area. This one is empty.