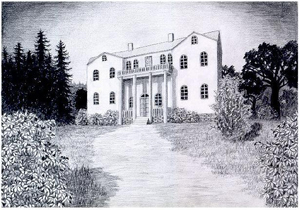 The Monkhood Estate is an undistinguished two-story home set on ample land near the Lambert Quay. The smell of the ocean is discernable depending on how the wind is blowing. It has two wings. The external walls are of Yorkshire cobbles and roof is of Welsh Bangor heavy blue slate. All the windows in the house have shutters. Behind the house is a clump of forest.

The interior of the house is finished and furnished in Late Victorian style. The house is modestly furnished overall, yet it seems to have been built for grander furnishings. The house is lit by gas lighting.

The old chapel is reached by an overgrown path which is in places almost non-existent. The first thing noticeable from a distance is that the chapel belfry is boarded completely up. The building is surrounded by an old rusted iron fence, holding no trace of its original paint. An iron gate in front leads to an overgrown path to the front door. The chapel faces south. On the east side is a small graveyard mostly composed of headstones with a single large tomb near the back. On the west side is a bramble of dead dry bushes and trees. A few hundred yards west of the church is a small tributary. At night, a mist rises from the river to cover the area. There are nine zombies guarding the chapel.

The church is dilapidated and slowing falling into ruin. The stained glass windows are almost entirely broken out, on the lead framing remaining. Above the door, carved into the wood is MONKSHOOD.

The Monkshood Estate is the ancestral home of an old shipping magnate – now long dead. The home was occupied by Mr. William Monkshood IV until his death in 1892. It is now in guardianship for Miss Lyla Monkshood, his granddaughter.

From the notebook of Inspector James Smythe taken during the events at Monkshood Manor, below is a list of family members:

William Monkshood IV - From a meeting shortly before his death: "William is a thin wiry man who appears at first to be very old, although a closer inspection shows that he is much younger. He has dark brown hair and brown eyes. His skin is dark complected, and it is clear that he spends a fair amount of time outside. He wears evening dress and has an antique signet ring on." Descended from a long line of shipping magnates, William lived at the Monkshood Estate with his granddaughter Lyla until his untimely death on January 9, 1892. His death was chronicled in the journals of Dr. Clive James.

Lyla Monkshood - Granddaughter of William Monkshood IV, Lyla has been described as "a waif-like slip of a girl, she has her grandfather’s brown eyes and brown hair. She is clearly a girl of the forest, as she is tan from playing in the sunshine and her hands bear the calluses of a serious tree climber." Lyla is now in the guardianship of Eldon Graves, the Monkshood butler, until her eighteenth birthday.

Elias Culverton - Elias Culverton is suspected of being a member of the Haunting Hand working for Miss Julia Gladstone. He has been implicated in the events at Monkshood Estate where he was working temporarily as a hired hand. Witnesses describe Culverton as, "short and wiry, Culverton is the opposite in appearance to Gregson. He is quiet with a squeaky voice and a mousy demeanor. He often rebukes Gregson for his volume." He was a cohort of Paul Gregson.

Eldon Graves - Graves has been a butler in the employ of the Monkshood Estate since William IV was a small child. A Scotland Yard report describes him as "a stiff elderly man, impeccably dressed, with a manner silent and brooding. While he is brusque and runs the house with brutal efficiency, he has a soft spot for little Lyla."

Paul Gregson - suspected of being a member of the Haunting Hand working for Miss Julia Gladstone. He has been implicated in the events at Monkshood Estate where he was working temporarily as a hired hand. Witnesses describe Gregson as, "crude and coarse, Gregson is always making stupid puns. He is a broad man with a ruddy complexion and dark bushy hair. He is very tall and has a loud boisterous laugh." He was a cohort of Elias Culverton.

Grace Hooper - The cook at the Monkshood Estate. Described by her friends as, "a large middle-aged woman with red hair and bright green eyes. Wrinkles around her eyes betray an Irish love of mirth. She can almost always be found dressed in an apron with flour on her hands. She bakes bread for the local churches to give to the poor." Hooper was killed in the altercation at the estate.

James Jeevers - A stableman in the employ of the Monkshood Estate, Jevers was described by Scotland Yard Detectives as, "a countryman in his late 30’s, Jevers is solidly-built, tan with thinning hair. He always wears boots and workman’s shirt and trousers. He drinks to excess, but he is an honest worker." Later implicated in the destruction of the estate after the death of William Monkshood IV, Jevers has disappeared and his whereabouts are unknown.