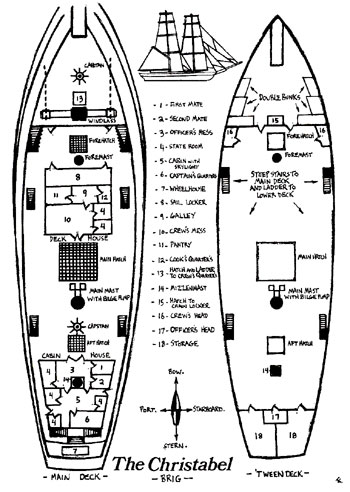 The Christabel is a wooden three-masted brig built in 1853. She boasts 1099 tons, a length of 170 feet, a beam of 40 feet, and a depth of 21 feet. She is owned by Stander’s shipping company. The ship has seen a lot of use, and is rather worn looking compared to the many steamships in the harbor.

The deck of the ship is divided into three parts: a raised forecastle, the main deck, and the cabin house.

The forecastle is a raised area at the front of the ship. The Christabel carries a capstan (a heavy winch) ten feet from the bow. The center of her pump-brake windlass is twenty feet aft of the bow. Only the windlass, pawl-post and the catheads are on the forecastle. A small companionway with a vertical ladder leads into the crew quarters, below the main deck.

The main deck runs from the forecastle to the cabin house. There are three hatches into the 'tween deck here. Each hatchway has coamings and ledges to keep water from getting into the hold. Covers are placed across the hatches during bad weather. The first hatch is just aft of the forecastle, in front of the foremast. Aft of the foremast is the deckhouse, containing the galley, a sail locker and staterooms. The ship's longboat is lashed atop the deckhouse, behind the galley chimney.

The main hatch is between the deckhouse and mainmast. The third hatch is located just in front of the cabinhouse. Another capstan, used for moving cargo, is located between the main mast and the third hatch. The main deck is otherwise open and kept free of loose gear. The ship's pumps are located at the base of the mainmast. A box-like well extends into the bilge through which the pipes of the pumps run. The well has cleats nailed to the aft side so that the ship's carpenter can climb down for maintenance.

The deckhouse contains the crew's galley and mess, two staterooms, food stores, the cook's quarters, and a sail locker. The crew takes their meals here, while the Captain and Mates eat in the cabinhouse. Passengers can eat in either mess but those of higher social standing would be out of place in the crew's mess. The dining table here is often used by the men for activities such as card playing or drinking. The two staterooms here are less ornate than the ones in the cabinhouse. The stove is a wood burner. Joe Carr and Captain Holley have the only keys to the pantry.

The rear of the deck is dominated by the cabinhouse, containing four staterooms, quarters for the Mates and Captain, the officer's mess, and the main cabin. These rooms are all finished quite elegantly, and each has one or two portholes. Rosewood, mahogany, bird's-eye maple and satinwood are used with delicately carved pilasters and capitals. The rooms show considerable wear due to the ship's age. The divans in the main cabin are covered in leather, and hanging on the wall is an old cutlass carried by Holley's father at Trafalgar. A skylight pierces the ceiling of the main cabin.

At the rear of the cabinhouse are stairs up to the poop deck. The stairs are arranged athwartship (side to side) rather than fore and aft. Atop the poop deck is the wheelhouse which also contains the lamp storage locker. Under the poop deck are another sail locker and the deck stores.

Inside the ship are two cargo decks. The first, or 'tween deck, is where the majority of the cargo is located. This deck has hatchways located under the main deck hatches for access to the lower deck. It is cramped but can be ventilated by opening the main deck hatches. There are also six portholes on each side which can be opened for light and fresh air. Forward, under the forecastle, are the crew quarters, which sleep up to twelve crewman. The anchor chains run from the ceiling into the chain locker below. Aft of the chains a hatch leads to the chain locker. The bowsprit terminates in this area. A bulkhead with two doors separates the crew quarters from the rest of this deck. Outside these doors, on either side of the hull, is a crew lavatory. The majority of the 'tween deck is open space, normally filled with cargo. The masts run through this deck. Vertical ladders lead up through the main deck hatchways, and four sets of stairs located along the hull also access the main deck.

Beneath the hatches in the 'tween deck are hatches into the lower deck - the only openings to the rest of the ship. The lower deck is very dank and dark. Most of this area is taken by ship's stores: water casks, food, sails, chain and rope, etc. The areas directly around the hatch openings are generally used for additional cargo space. The masts run through this deck into the keel. Vertical ladders run up through the hatches to the 'tween deck.

According to the notes of Dr. Clive James, the following were the crew of the Christabel.

Captain Dan Holley – Commander of the Christabel - Captain Holley loves her dearly and ensures that she is completely seaworthy. He is a tall, blond fellow of Scandinavian descent.

Hawkins – Grotesquely burn-scarred seaman (0/1 sanity). Hawkins will always wear a full cloak when in town. He only reveals himself after leaving port. He is shy about his condition, but his fellow seaman know better than to taunt him.

Carr – A slightly pudgy sailor, Carr is good-natured and always willing to prepare special foods or drinks for the crew. He has a thick shock of red hair.

Oldfield – The quiet, taciturn navigator appears to be as old as the sea. He is thin with a pipe almost always stuck in his mouth. His hair is grey as are his eyes. He will quickly report any trouble to Dan.

During the fateful sinking of the Christabel, the following Haunting Hand cultists were thought to be killed: Solomon Green, Patrick Kelly, John Leary, Alfred Bean, Henry Brand, and William Lindon.