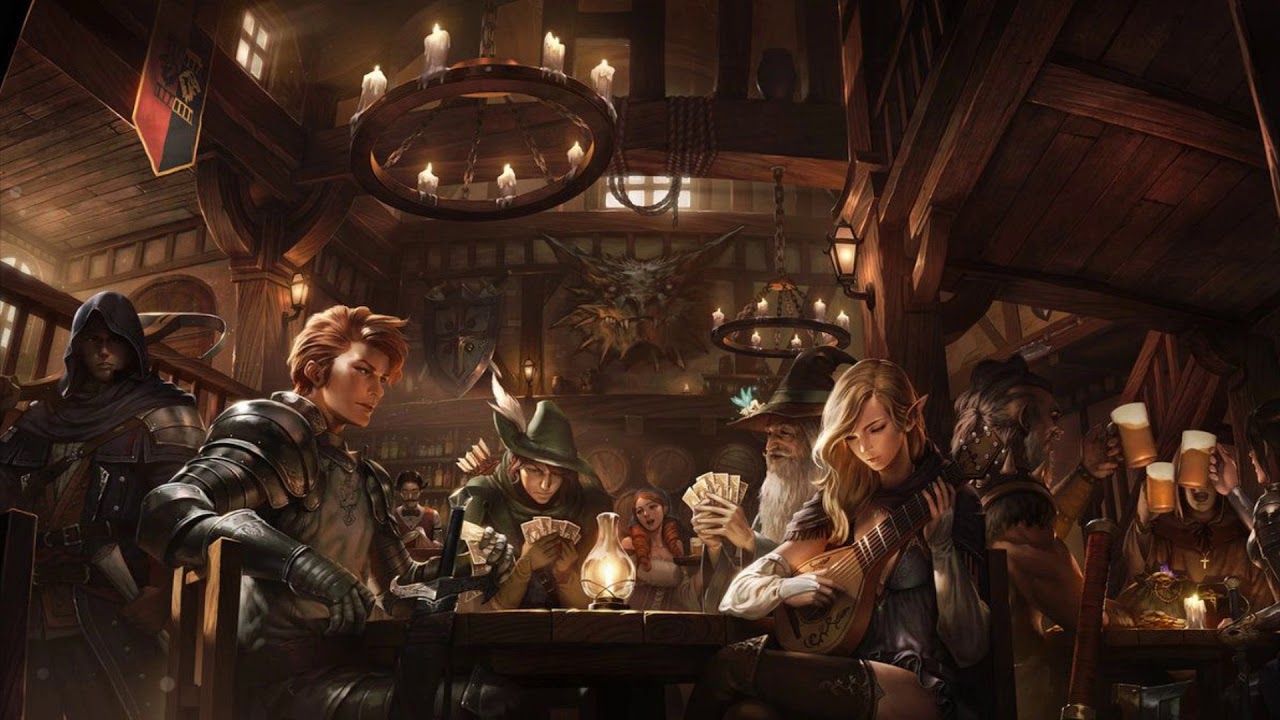 It is 652 TA. Even the spring rains which have come early to this part of the Reaches cannot dampen the enthusiasm of the townsfolk of Bishopshill. Times are lucrative for the rebels of the Bandit Kingdoms, and the town has rallied around the fight for continued independence from the Crown. The raids from Walworth, the newest barony established some 100 miles to the southwest, have intensified - mostly because of pressure from Tobias Doyle, the Third Paladin King. Bishopshill has withstood the knights, paladins and archers of Baron James Walworth just as it has weathered attacks from the dark creatures that have come over the years from the Shadowyarn Mountains to the east.

From inside the ramshackle pub, you hear a muffled voice - very drunk - "Curse the Mask and all his fuckin' knights". The Mask, a nickname for King Doyle, is so given because of his penchant for disguise and first-hand intelligence gathering. A roar goes up from the patrons of the Broken Crown. You smile, smelling the pungent smoke of the peat fire. You button up after relieving yourself of a slightly watered ale and are just about to return to the pub for another round when you see the bright tail of a meteorite as it drops through the low-lying clouds, striking somewhere deep in the looming mountains, no doubt.

As you pick your way through the crowded pub back to your usual table, the talk is still about the old dwarven prospector who came through town just a week ago. Not a Steelhand or Blackrock dwarf like most in the area. Called himself Krib and claimed no clan. He carried a satchel of great weight filled with an object the size of the largest summer melon. He never let the leather bag out of his sight, but Krib did giggle about "becoming a lord" once he took his prize to Teufeldorf. Whispers and rumors run the gauntlet from the largest sapphire ever found to a dragon's egg. Nobody knows. Krib left as suddenly as he arrived two nights ago.

As you round the corner, almost bumping into Ella Nightingale, preparing to sing a lonely ballad of forest life, you notice that the Heroes' Table is empty. A twang of unrequited love for Nightingale and a touch of jealousy for the Heroes - probably off on some great adventure. The Heroes Table, raised a foot from the common pub floor, is the ultimate pedestal of Bishopshill rebels. Long held by others, you gaze at its ancient polished surface, five silver mugs sit awaiting the return of the Heroes.

As you turn towards your own, humble table, the voices of your friends come into focus. "They're missing. Gone. As I've heard tell, the Heroes are lost in the mountains seeking the source of Krib's treasure." You smile, an adventure might just be afoot. 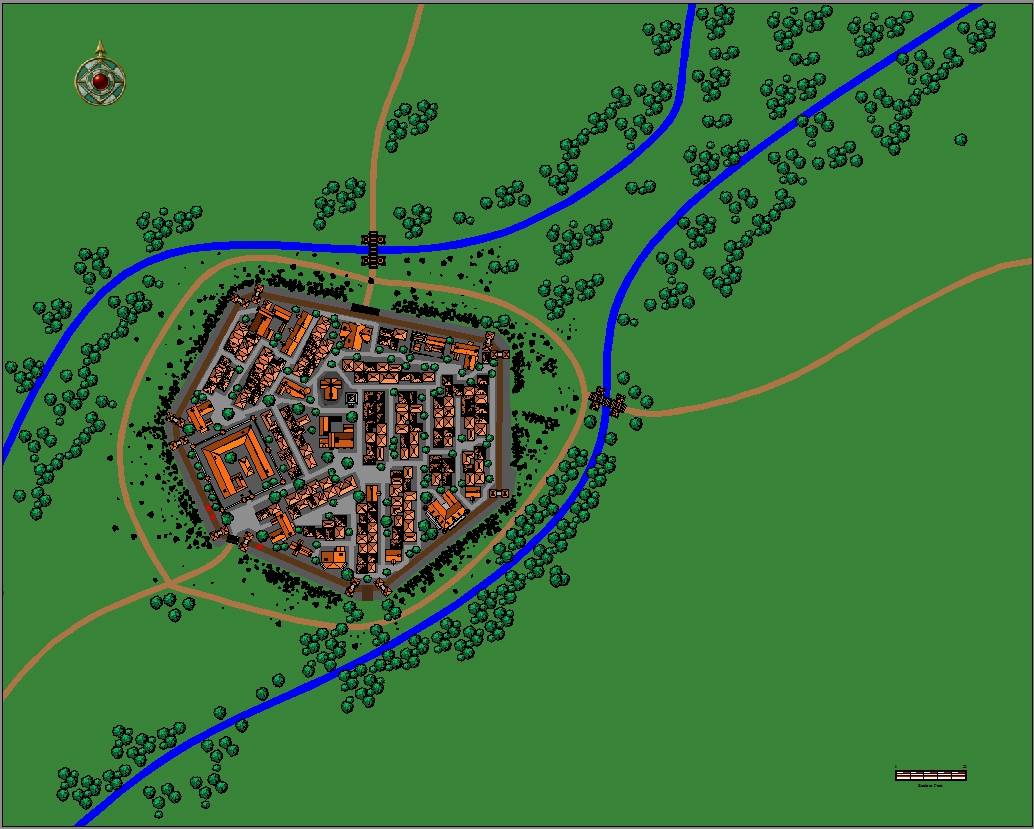 Bishopshill is a butte several hundred feet in height. It rises from the plains in dramatic fashion, creating a defensible location with 360 degree views of the surrounding area. The area around Bishopshill is good grassland, although too rocky for large-scale farming or agriculture. The land is mostly used for grazing cattle.

To the east lie the wild and dark woods of the Dullstrand with the Shadowyarn Mountains peaking through the canopy of trees. To the south, the forest gives way to the Direhaunt Swamp, a morass formed by the streams that run out of the mountains. To the north and west lie the plains of the middle Reaches. To the southwest, some sixty miles distant, is the newly-built Walworth Castle, a stronghold of Crown ambition to tame the Bandit Kingdoms - to date, ineffective at curtailing the activities of the brigands. To the north lies the Lesser Farthing Road, ripe with rich merchant caravans travelling between the Western and Eastern Reaches.

The butte, called the Knoll, has been shaped by human habitation over the Ages. Most notably the town of Bishopshill has been built atop the hexagonal butte in an area approximately 16 acres in size. The town of Bishopshill is entirely contained in that area. Encircling the edge of the town, a wooden palisade has been constructed - not for defense against knights, as it would be impossible for an army to scale the sides of the butte. Rather, the palisade provides an easy way to move troops and the three large wooden catapults along its walls. The catapults can be quickly positioned to repel foes coming from any direction.

At the center of the town, another natural shaft of hexagonal stone extends forty feet in height. Eighty feet in diameter, a small stone chapel has stood balanced on this feature, called the Spire, since the Second Age. The chapel is not used for worship but can be reached by a rope ladder that allows uneasy access.

The base of butte is very rough land, filled with scree, rubble and trash thrown down from the town above. Access to the town is via a large wooden elevated platform that is built on the southwest side of the Knoll. It can carry a large wagon and is raised and lowered by a team of horses that pull large ropes through a network of pulleys. In time of war, the platform is locked in place at the top of the butte.

Recently, a cave, affectionately called the Grotto, has been carved into the base of the butte by a team of dwarven engineers. A large iron portcullis allows for the Grotto to be secured when necessary. This cave is used to secure cattle and provisions for emergency use, and a well has recently been dug to supply water when the tanks in the city run dry. A single set of spiral stairs have been carved, at great expense, between the Grotto below and the town above.

Bishopshill is a town of five hundred souls. At any one time, there are usually one hundred visitors in town - filling the lodgings provided by six pubs and inns.

The reputation of Bishopshill in the Reaches is one of a decrepit den of sin and thieves, barely held together by lawless brigands. Nothing could be further from the truth.

The town is managed by Melody Murphy, a former brigand and legendary sword fighter, named for her habit of whistling while cutting down enemies. Tough and fair, she was elected by a majority of the five hundred souls that call Bishopshill home.

The town is very compact with almost all buildings being two stories in height and sharing walls with their neighbors. The ground floors tend to be shops, stalls, workshops and the like with residences above them. Every roof is fitted with a rain barrel as carrying water up to the top of the butte is a miserable task. Many roofs also have a small garden planted for use by the household. By Reaches standards, the buildings of Bishopshill are in good repair thanks to a number of artisans, abundant stone, and solid local timber. Because of the hardness of the caprock, there are no cellars or basements in Bishopshill.

On the downside, Bishopshill is known for high winds and frequent lightning strikes which often hit the Spire during storms.

Efficient use of space includes a number small fruit trees which provide the town with delicious apples, peaches, and cherries - some of which is made into spirits, but much of the fruit provides a variety to the staple diet of beef and dairy.

Past Adventures of the Irregulars

For many years The Irregulars have adventured in the Realm. From the early days of the Rice Irregulars (1981) to the most recent adventures aboard the Wanton Wench by the Lyons Irregulars, the tales of these characters - great and small - weave the fabric of the Realm. Unlike the long-running high school campaign which predictably meets once a year at Matcon, irregular adventures include everything from one-night stands to five-year, fifty plus session mega-dungeons.

These are the stories and tales created by the most diverse and eclectic cast of characters ever assembled. Below are some of their best.