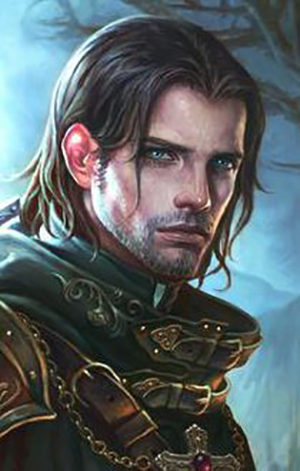 Ernest Goodfellow is the current Duke of Dragonsford and King of the Eastern Reaches. He assumed the throne in 884 TA after slaying the previous ruler, King Trafford, and his wizard accomplice, Asbar the Merciless, during the Hastur Rebellions. In the years that followed, King Goodfellow has brought the eight other minor kingdoms east of the Shadowyarn Mountains under his control, and the Eastern Reaches have enjoyed significant growth and prosperity.

Born in Teufeldorf on June 27, 811 TA, little is known of Goodfellow's early life. It is thought that he is human, although his age belies that fact. A natural adventurer and fighter, Goodfellow longed to join The Order of the Knights of the Kingdom, a prestigious military order established by King Gregory the Even-Handed. Goodfellow's first recorded adventure for the Order was in May 829 TA when he was sent as a squire with Sir Zachary, a Knight of Virtue, to investigate the happenings at the Upside Down Tower of Orling the Backwards on the Sandalese border. While Sir Zachary was killed during the adventure, Goodfellow proved his worth to his companions.

Over the next three years, Goodfellow served the Order with distinction being one of the youngest to earn the rank of Knight of Merit. His adventures included campaigns against the Brotherhood of the Seven, a rescue of King Gregory, and a journey to Korgsland. While his ascension in the Order was almost guaranteed, he was sent on a secret mission in 832 TA during the uprising of the Shadowland Empire. Given command of Dragonsford Castle, Goodfellow and his companions left Teufeldorf heading east. They did not arrive until 883 TA. During his fifty year absence, his power had grown significantly although he had not aged. Goodfellow still appears youthful today despite being over one hundred years old.

Goodfellow was instrumental as a leader in both the First War of the Reaches (886-890 TA) and the Second War of the Reaches (899-907 TA). In addition, he participated in adventures into the Tang Empire and the Wolfshaunt. Goodfellow still adventures to this day, currently rumored to be on a mission against the Overlord in the newly-launched Invasion of the Old Kingdom.

While the Order was disbanded in 840 TA, Goodfellow has kept to the code of conduct set forth by his mentor, King Gregory. Along with King U-Gene of Durinshold and King Vincent Fleetwood of the Western Reaches, the Reaches are ruled in general concurrence. Collectively, the rulers are called the Three Kings or simply the Crown. The Three Kings often adventure with Hylax and Fuzzwort. Goodfellow is unmarried and without children, although rumors persist of a long-standing relationship with Lady Laura.